News
Business
Movies
Sports
Cricket
Get Ahead
Money Tips
Shopping
Sign in  |  Create a Rediffmail account
Rediff.com  » News » 'Muslims have to be magnanimous'

'Muslims have to be magnanimous'

'If better sense prevails, Muslims should offer the disputed land in Ayodhya back to the government.' 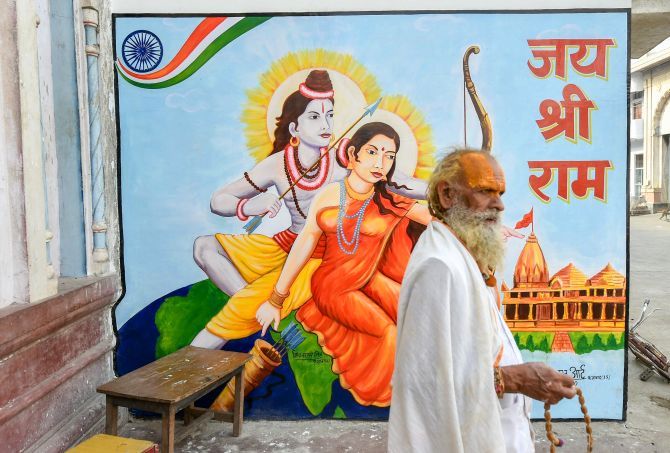 Lieutenant General Zameer uddin Shah, PVSM, SM, VSM, who retired as deputy chief of the army staff and is a former vice-chancellor of the Aligarh Muslim University, believes Muslims should hand over the disputed Ayodhya land to the government as a goodwill gesture for communal peace.

"This is a last ditch effort on our part to start an amicable solution," the general tells Rediff.com's Archana Masih.

Why does your group 'Muslims for Peace' feel that Muslims should relinquish their claim to the Ayodhya land and offer it to the Hindus?

Let me clarify, we are offering it back to the state government. They can do whatever they want with it.

There is an edict which says that any place where prayers have not been read for several years can be returned to its owner.

The owner at that time was the Waqif, who was the Mughal emperor, and now it is the Government of India. We are offering the land back to the Waqif which means the owner.

The Sunni Waqf board is with us because they are the custodians of the land.

A court ruling will result in a winner and a loser.

Firstly, we don't want a panchayati settlement like what was given by the high court -- which awarded 1/3 of the Ayodhya site to the Hindus and 2/3 to the Muslims.

That will not work in the present surcharged atmosphere in India.

It has to be a clear cut ruling.

In case we win, we are still the losers because it will not be possible to construct a mosque.

We are convinced that we will not be able to rebuild the mosque, so what is the use then of winning?

That is why we thought it was better to make a last attempt. The Supreme Court has also said to continue the process of negotiation and find an amicable solution.

This was a last ditch effort on our part to start an amicable solution.

I know deep in their hearts they feel this is the only solution.

Zafaryab Jilani, (secretary, All India Muslim Personal Law Board)said your group has no locus standi because you do not understand Muslim sentiment.

In a way he has a point. Our aim is just to convince the bulk of the citizens of India that an amicable solution is possible.

I have trust in the All India Muslim Personal Law Board and have respect for Advocate Jilani and members of the board.

They have taken a line, but we are trying to convince a bulk of the Indian population that the way forward is where there are no losers and that's the best way for a negotiated settlement. 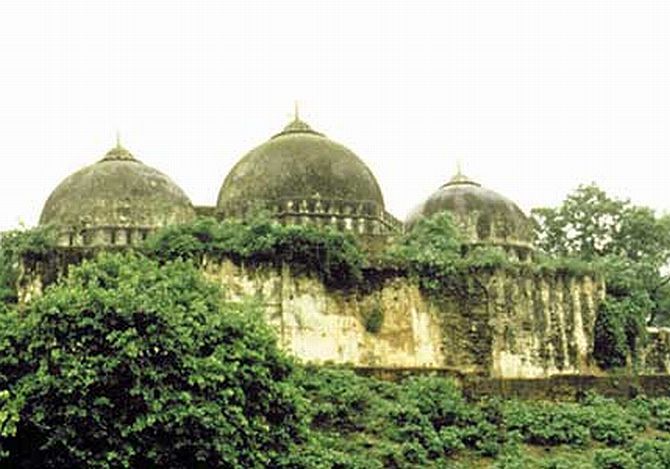 IMAGE: The 16th century Babri Masjid was demolished by kar sevaks on December 6, 1992.

The AIMPLB says it will adhere to whatever is the court verdict.

Of course, but as I said no matter in which direction the court verdict goes, the minority community will still be the losers.

If we lose the case, we are losers and have lost the opportunity of winning over the majority.

If we win, will we be able to do anything with the land?

If Muslims try to construct a mosque, there will be riots and bloodshed. There will be a repeat of 1992.

Being a soldier myself, I know soldiers never give up during difficult times.

In fact, there have been times in my military tenure when you felt you were at the losing end, but you did something surprising and that worked in your favour.

What guarantees would the Muslim majority want in return for this grand gesture?

That something like the demolition of the Babri Masjid should not be repeated again.

Secondly, we want more teeth to the Places of Worship Act, 1991. The Act at present does not act as a deterrent. There has to be such a deterrent that nobody ever tries something like this again.

By offering to give the land after a mosque was destroyed in a criminal act, isn't this expecting too much magnanimity from the Muslims, especially if you look back at the majoritarism of recent years?

Of course, Muslims have to be magnanimous if they want peace and amity.

The conditions we have set should be accepted -- that there will be no more demands of this nature.

If you expect any punishment to be given to the perpetrators you are mistaken. It will just be one day's imprisonment and a Rs 2,000 fine which is laughable.

So let us not press for it because that's not going to happen. Punishment is supposed to act as a deterrent and after all he became the governor!

(Kalyan Singh was the chief minister of Uttar Pradesh when the Babri Masjid was demolished in 1992. He submitted an affidavit in the Supreme Court that his government would not allow any damage to come to the mosque, but the 16th century mosque was razed by kar sevaks on December 6, 1992. He resigned as chief minister and his government was dismissed by the Congress government at the Centre. He was appointed as governor of Rajasthan in 2014.] Would Muslims feel they have got justice if they offered the land back? What would the Muslim sentiment be? Won't it be hurt?

The Muslims are aggrieved, but now it is time to move forward.

We have to win over the majority community and drop the hardline which an increasing number have taken.

This started with the demolition. In case the Muslim community had foresight at that time and had adopted the course we are advocating now, probably the mosque would have been removed stone by stone and rebuilt at some other place.

That was the offer, but we didn't take it.

The minority has to show magnanimity. I know it is difficult under these hard times, but if better sense prevails we should offer the land back to the Waqif -- that is, the Government of India. The Sunni Waqf who are the custodians are with us.

I will be castigated by my own community and that is something that I have learned to accept.

I was castigated when I was vice chancellor of the Aligarh Muslim University by my own community, but the university was graded by Times Higher Education London and US World and News Report as the best university of the country.

History will say that we were right.

How can a gesture like this potentially change things for Muslims in India?

Nothing can change things for Muslims in India unless we follow the path Sir Syed Ahmed Khan said -- that the only way forward is education.

If you are educated you can break through the walls of discrimination and barriers like my brothers and I, and people who are educated in good schools have managed to do.

Discrimination will always be there. I accept it as a reality of life, but you can break through the barriers if you are educated, have foresight and determination.

How can this grand gesture of reconciliation and magnanimity change the attitude of the majority towards the minority?

It all depends on how you perceive the adversary to be. If you feel he is hard nosed, obstinate, then you will also become hard nosed and obstinate.

If they perceive that the Muslims want peace and are not rigid, I think the majority community will reciprocate.

It is a last ditch effort but isn't too late?

It is, I have never meddled in matters religious, but I joined this organisation 'Muslims for Peace' in Aligarh only last week.

They told me what their stand was and I thought I must help them.

It is a last ditch effort, but we must never give up.

It is for the media now to put across our point of view so that the majority community also accepts it. That is our hope.