Gillard, who is on a four-day visit to Japan, toured the coastal town of Minamisanriku in Miyagi prefecture, one of the worst-hit areas in the March 11 quake and tsunami that left nearly 30,000 people dead or unaccounted for.

More than 1,130 people were killed or went missing in the town, which had a population of 17,600, following the twin disaster. Gillard was briefed on the situation there by Minamisanirku Mayor Jin Sato, who himself barely survived the disaster at the town's disaster prevention office building.

A local photographer had taken a picture of Sato and other officials clinging to the top of the structure when the tsunami engulfed the three-story building.  "It is miraculous that anyone survived such devastation," Gillard was quoted as saying. "It's been amazing to see the spirit of the people... even in such difficult, difficult circumstances."

The prefectural government of Fukushima, where the crisis-hit nuclear plant is situated, is considering implementing regular health checkups for its residents, in the wake of the atomic emergency there, its officials were quoted as saying.

Prime Minister Naoto Kan on Friday said his government would most likely need to issue new bonds for a sizeable second extra budget, expected to be drawn up around June, to finance reconstruction work in the quake-tsunami-hit northeastern region.

He remarks came after authorities announced a $50 billion emergency budget for reconstruction work in tsunami-hit areas and widened a 20-km evacuation zone around the Fukushima plant. Meanwhile, Tokyo Electric Power Company, the operator of the crippled plant, has decided to be more cautious about the volume of cooling water injected into the spent fuel pool of one of its reactors.

This is due to fear that the reactor building might be further damaged by the weight of the water itself, national Broadcaster NHK reported.  The company has been injecting water daily into the spent fuel pools of the reactors to prevent fuel rods from being exposed and further damaged.

At the number 4 reactor's pool, the water temperature was about 91 degrees Celsius on Friday, more than 50 degrees higher than the normal level, and TEPCO was forced to inject 200 tonnes of water.  Citing damage to the walls of the building supporting the pool during last month's hydrogen explosion, the power company said excessive water injection could further weaken the structure of the building.

TEPCO on Saturday started assessing more carefully the appropriate amount of water to be poured into the pool, using a device to monitor temperature and the level of cooling water in the pool. The Japanese government has expressed concern about the structural strength of the Fukushima plant's number 1 reactor.

It says the ongoing water injections may be making the vessel less earthquake resistant. Claire Cousins, the Chairperson of the International Commission on Radiological Protection, told NHK that more checks are needed to measure radiation in the Fukushima area.

She said the Japanese government's decision to raise the permissible level of radiation from one millisievert to 20 millisieverts per year is in line with the levels set by the commission when dealing with emergency situations.

She said it is difficult to predict when people will be able to return to the evacuation zone, but suggested it may be a considerable length of time.

The area will need to be monitored to determine when it will be safe for people to live there again. Cousins said Fukushima is not comparable to Chernobyl atomic disaster of 1986, noting that a far smaller amount of radioactive substances has been released.

She said any effect will be minimal because people have been evacuated from most irradiated areas, NHK reported.
Source: PTI© Copyright 2021 PTI. All rights reserved. Republication or redistribution of PTI content, including by framing or similar means, is expressly prohibited without the prior written consent.
Related News: Julia Gillard, Broadcaster NHK, TEPCO, Fukushima, Japan
Print this article
Sibal signs pact with Australia on education 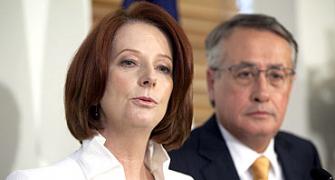 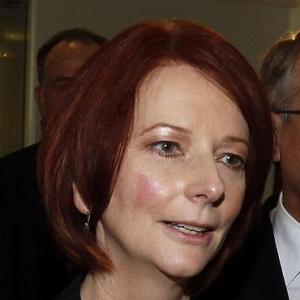