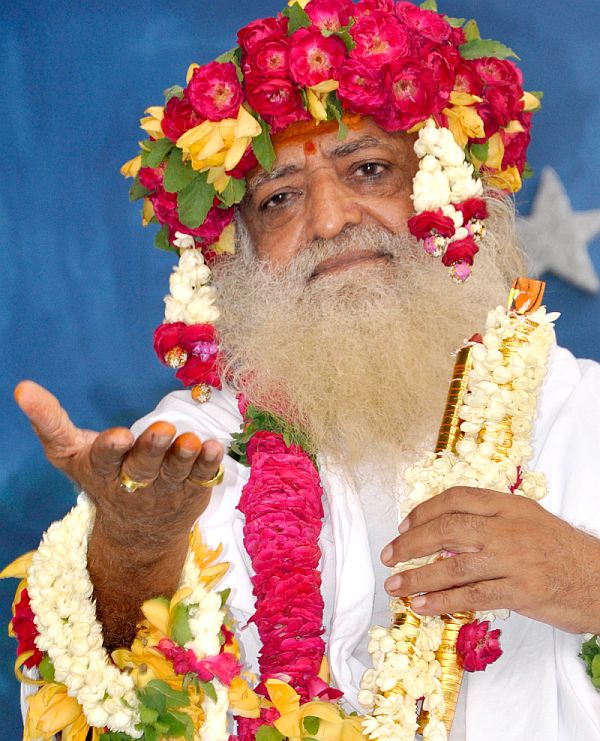 Asaram's alleged henchman Karthik Haldar, suspected of shooting dead three key witnesses of two rape cases against the self-styled godman and his son Narayan Sai, had planned to acquire an AK-47 rifle for eliminating other witnesses, the police said.

Haldar, a sharp-shooter and staunch follower of Asaram, was arrested from Raipur in Chhattisgarh on March 13 in a joint operation by the Gujarat Anti-Terrorism Squad and city Crime Branch.

He is now in the custody of the Rajasthan police for further probe, city Crime Branch's Assistant Commissioner of Police K N Patel said on Monday.

During his interrogation, Haldar had admitted that he wanted to acquire an AK-47 rifle or a similar capacity "large" weapon to carry out the killings, Patel said.

"In his statement, Haldar admitted that other sadhaks (disciples) of Asaram collected Rs 25 lakh to fund the operation of eliminating the witnesses. In a meeting with these sadhaks, it was decided that a large weapon, such as AK-47, must be acquired to carry out the killings," he said.

"To arrange an AK-47 or a similar capacity weapon, Haldar paid Rs 11 lakh to a person in Jharkhand. However, Haldar told us that he never received the weapon as that person cheated and gave only a double-barrel gun, which Haldar used to fire at Mahendra Chawla last year at Panipat in Haryana," the ACP said.

Chawla, Asaram's former personal assistant who later turned a witness against him, had survived the attack. Apart from the key witnesses, Haldar had also hatched a plan to kill the then investigation officer in the rape case filed against Asaram in Jodhpur.

Haldar was allegedly involved in the killings of Asaram's personal doctor Amrut Prajapati in Rajkot, the jailed religious leader's former assistant-cum-cook Akhil Gupta at Muzaffarnagar in Uttar Pradesh and another key witness, Kripal Singh, at Shahjahanpur in UP. These killings took place between June 2014 and July 2015.

All of them were shot from close range as part of an alleged conspiracy to eliminate those who had given their testimonies against Asaram, a crime branch release had said when Haldar was arrested in March.

Apart from these killings, Haldar was also allegedly involved in four cases of attempt to murder, including firing at Asaram's former personal assistant Mahendra Chawla last year at Panipat in Haryana.

Among other attacks, Haldar fired eight rounds at the warden of Asaram's Chhindwada-based ashram, Omprakash Prajapati, and his wife Seema, the release had stated.

Haldar, a native of South 24 Pargana district in West Bengal, first came in contact with Asaram's preachings in 2000 when he attended his religious discourse in New Delhi.

A year later, he left his household responsibilities and became a full-time sadhak and started living at Asaram's ashram in Motera near Ahmedabad, the release had said.

In October 2013, two Surat-based sisters had registered separate rape complaints against Asaram and his son. The elder of the two women, in her complaint, had accused Asaram of sexual assaulting her between 1997 and 2006 when she was living at his ashram on the outskirts of Ahmedabad city.

Asaram is presently lodged in Jodhpur jail since 2014 in connection with another alleged rape case.