The India Meteorological Department has issued an orange alert for Mumbai, warning of very heavy rains at isolated places with strong winds on Monday, May 17, as the very severe cyclonic storm Tauktae is likely to pass close to the Mumbai coast towards Gujarat. Three teams of the National Disaster Response Force stationed in the western suburbs of Mumbai have been put on alert. Teams of the Indian Navy are also kept on standby, officials said on Sunday night.

Besides, six teams of the Mumbai fire brigade's flood rescue unit are deployed on six beaches in the city, a senior civic official said.

Five temporary shelters each are put up in 24 civic wards of the metropolis so that citizens can be shifted there if necessary, he said.

Another official said over 500 of the 580 patients have been shifted to other COVID-19 hospitals from ICUs of jumbo Covid centres till 10 pm on Sunday.

"The shifting of the patients started on Saturday night and it went on throughout the day and night (on Sunday) since last night," a BrihanMumbai Municipal Corporation spokesperson said. Officials said that shifting of these patients was taking time as most of them are on oxygen support.

According to IMD officials, the very severe cyclonic storm over the east-central Arabian sea moved north-northwest with a speed of about 19 kmph and lay centred at 5.30 hours on Sunday.

The met department said the cyclone could cause heavy to very heavy rains at isolated places in north Konkan, Mumbai, Thane and Palghar on Monday.

The IMD has predicted extremely heavy rainfall in Raigad on Monday.

According to the BMC, Mumbai didn't receive any rains on Sunday though the sky was mostly overcast.

However, the weather mainly remained windy in the city, resulting in four trees falling in the western suburbs.

As part of preparedness, officials said they are contemplating a possible shutdown of the Bandra-Worli Sea Link as a precautionary measure in view of the IMD's announcement that the cyclone may pass close to the city.

The BMC had on Friday alerted city hospitals to avoid last-minute confusion over beds and availability of oxygen devices.

The IMD had informed the BMC that Mumbai is not in the direct line of the threat of the cyclone. However, as it will pass through the sea near the Mumbai coast, its effect is likely to be accompanied by rain and strong winds.

The city's 24 ward officers have been told to be ready with manpower and equipment and prepare shelter homes in case people living near low-lying areas need to be relocated, the official said.

The civic body has suspended the vaccination programme on Monday due to the cyclone warning. 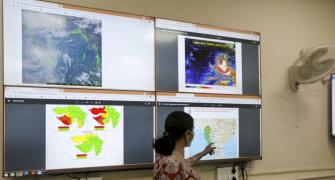