IMAGE: Citizens hold placards as they raise slogans during a protest against the Citizenship Amendment Bill (CAB), in Agartala. Photograph: PTI Photo

Internet services have been suspended in the entire Tripura for 48 hours from 2 pm on Tuesday in view of the ongoing protests against the Citizenship (Amendment) Bill, an official notification said.

The order also prohibits SMS messages of all mobile service providers. The step has been taken to prevent mischief mongers from spreading rumours.

The state home department's notification has been signed by A K Bhattacharya, additional secretary, government of Tripura.

'This prohibition shall be applicable to press messages also. Violation of this promulgation will be punishable under Section 188 Indian Penal Code and also under the relevant provisions of the Indian Telegraph Act, 1885 and the Temporary Suspension of Telecom Services (Public Emergency or Public Safety) Rules, 2017,' the notification said.

The order said 'it has been reported by the director general of police, Tripura that rumours are being mongered about ethnic clashes between tribal and non-tribals in Manu and Kanchanpur areas. This has created a violent situation in the entire area.

'It has been noticed that SMS, WhatsApp and social media platforms being widely used for transmission of fake images which have potential to incite violence in the state at a large rate.

'Whereas such aforesaid incidents have generated serious law and order situation prevailing in the entire state having potential threat to public safety. Therefore in order to prevent the misuse of the above mentioned media to disturb the peace and tranquility of the entire state and for maintaining the law and order situation, the additional secretary is directed to promulgate the notification,' it said.

Like other Northeastern states, Tripura also witnessed protests over CAB during the day. 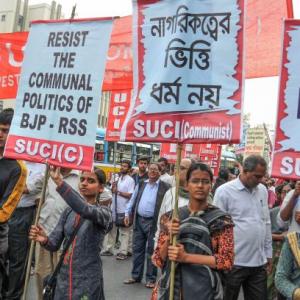