Taking strong objections to resolutions being moved in the European Parliament against the Citizenship (Amendment) Act (CAA), Lok Sabha Speaker Om Birla conveyed to the head of the European Union's (EU) legislative body on Monday that it was inappropriate for one legislature to pass judgements on another and the practice could be misused by vested interests. 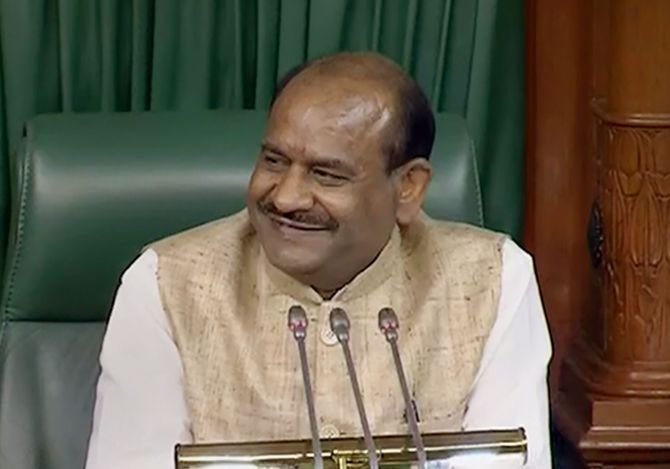 With the European Parliament set to debate resolutions against the citizenship law, Vice President M Venkaiah Naidu also asserted that there was no scope for outside interference in India's internal matters and the country was capable of addressing its concerns on its own.

The ruling Bharatiya Janata Party and the Congress also weighed in on the resolutions before the European Parliament, with the former questioning the objectivity of the members of the EU Parliament and the latter accusing the saffron party of internationalising the citizenship issue.

The assertions came after close to 600 lawmakers in the 751-member EU Parliament moved six resolutions against the CAA, saying the enactment of the law marked a dangerous shift in India's citizenship regime.

'I understand that Joint Motion for Resolution has been introduced in the European Parliament on the Indian Citizenship (Amendment) Act, 2019. This act provides for easier citizenship to those who have been subjected to religious persecution in our immediate neighbourhood,' he said in the letter.

It was not aimed at taking away anyone's citizenship and the legislation was passed after due deliberation by both Houses of the Indian Parliament, Birla said.

'As members of Inter Parliamentary Union, we should respect sovereign processes of fellow legislatures, especially in democracies,' he added.

It was inappropriate for one legislature to pass judgements on another, a practice that could surely be misused by vested interests, the Lok Sabha speaker said.

'I would urge you to consider the proposed resolution in this light, confident that none of us wants to set an unhealthy precedent,' he added.

Earlier, addressing a gathering at a book launch event here, Naidu said he was concerned at the trend of foreign bodies interfering in matters that were 'completely within the purview of the Indian Parliament and government'.

Such efforts were totally uncalled for and unwarranted, the vice president said, expressing hope that they would refrain from making such statements in future.

'There is no scope for outside interference in India's internal matters,' he asserted.

Naidu said whenever their basic and fundamental rights came under a threat, 'citizens rose in unison and defended them, as was seen against Emergency'.

'Our polity and democracy do provide enough space for expressing differences and dissents whenever warranted,' he said, adding that as a result, India had emerged as the most vibrant democracy in the world.

'The fact that the EU is debating the CAA shows that this government has internationalised the issue of citizenship law,' he said.

Senior BJP leader and Union minister Ravi Shankar Prasad questioned the objectivity of the members of the EU Parliament who backed the resolutions against the CAA, asking if they had ever raised their voices over the 'victimisation' of minority Hindus and Sikhs in Pakistan.

"The government of India has already explained that it (the CAA) is our internal matter. We believe in engagement. Lots of Left parties there have sought this resolution and our external affairs minister will engage with them and explain our position," he told a press conference at the Delhi BJP office.

India has been witnessing massive protests against the new law with opposition parties, civil rights groups and activists saying granting citizenship based on religion is against the foundational principles of the Constitution.

There has been no reaction from the Ministry of External Affairs on the resolutions against the CAA in the European Parliament.

Official sources, however, maintained that the CAA was an entirely internal matter of India and that the legislation was adopted through democratic means after a debate in both Houses of Parliament.

"Every society that fashions a pathway to naturalisation contemplates both a context and criteria. This is not discrimination," a government source said, explaining why India was opposed to the resolutions in the EU Parliament.