Bharatiya Janata Party on Wednesday intensified its battle to win 'Sonar Bangla' after Union Home Minister Amit Shah asked the local leaders in the poll-bound state to put their act together in a meeting on the intervening night of March 15 and 16. 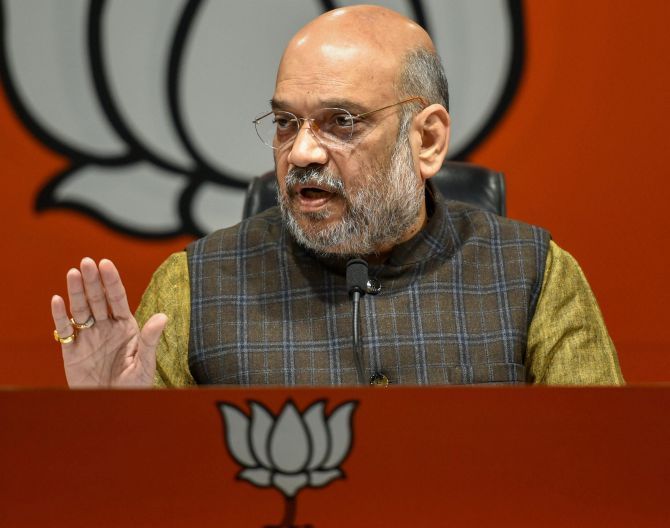 The former BJP president is learnt to have instructed the party leaders to start working on quelling the unrest within party cadre, genuine or sponsored.

"Part of these protests are being sponsored by Trinamool Congress. We are trying to talk to the workers and these are small issues which will be sorted out soon," stated a senior party leader.

Soon after the meeting, the party jumped into action. The leaders have been asked to hold meetings with the dissidents and pacify them.

"As the party has given tickets on the parameter of win ability, there are quite a few who joined BJP just days or months before the tickets were announced. The workers have been fighting against them for long. But such things happen in every election. We will work this out among ourselves," stated the source.

Shah had a stopover in West Bengal on Monday to take stock of the poll preparations.

In the meeting that went on till the early hours, Shah had reportedly asked the leaders to keep a tight vigil on troublemakers, improve coordination between state and central units, pacify the dissidents and quell the protests.

The BJP office at Hastings witnessed protest throughout the day as supporters of those who did not get ticket registered their anguish. The protesters came from various constituencies like Diamond Harbour, Bagnan, and Panchla to name a few. The dissidents were called in a group of five inside the office to understand their objections.

With leaders from various states camping in Kolkata and other districts, many have been given charge of coordinating with local leadership for top leaders rallies.

The state, witnessing a high-octane battle between the BJP and the TMC, is going to an eight-phased assembly poll for 294 constituencies. The result will be announced on May 2.