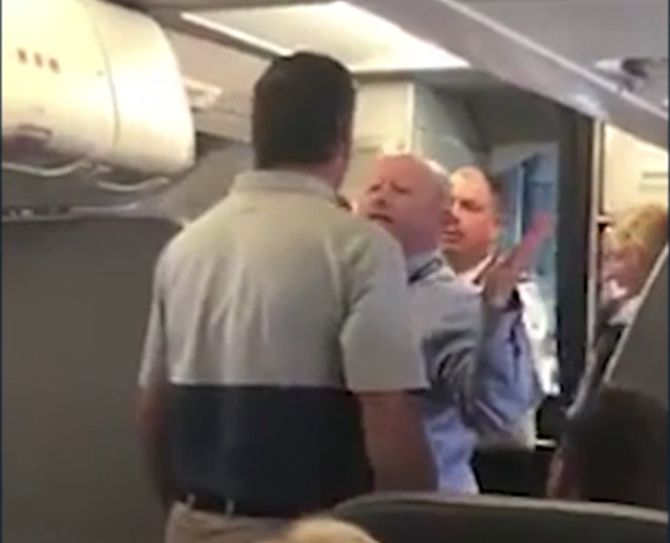 An American Airlines flight attendant has been suspended pending an investigation after he allegedly smacked a mother with her baby stroller on board a domestic flight, media reports said on Saturday.

The incident took place when the woman boarded the flight from San Francisco to Dallas on Friday.

In a video posted on Facebook by Surian Adyanthaya, the employee of the Texas-headquartered American Airlines can be seen arguing with a passenger on board the flight.

The footage does not catch the moment when the flight attendant allegedly struck the woman, but the atmosphere in the cabin gets tense as a man steps in to defend her, New York Daily News reported.

‘OMG! AA Flight attendant violently took a stroller from a lady with her baby on my flight, hitting her and just missing the baby,’ Adyanthaya captioned the video.

‘Hey bud, you do that to me and I will knock you flat,’ the man says to the attendant as the distraught woman stands to the side clutching her baby, with tears streaming down her face, the report said.

‘You stay out of this,’ the attendant shouts.

The man then takes a step forward and the attendant immediately turns confrontational.

‘I don't care what the story is, you don't hurt a baby,’ the passenger replied.

The woman was eventually escorted off the flight, but the quarrelsome attendant is allowed back on.

The video has gone viral on the social media with more than 3,500 shares.

AA condemned the flight attendant's behaviour and said it had launched an investigation into the incident, the report said.

‘What we see on this video does not reflect our values or how we care for our customers. We are deeply sorry for the pain we have caused this passenger and her family and to any other customers affected by the incident,’ the airline said in a statement.

The airline said the woman and her baby have since boarded another flight bound for an international destination. The attendant has been removed from duty pending an investigation.

‘We are disappointed by these actions,’ it said.

The incident comes weeks after a Vietnam-origin doctor was dragged and beaten up by police officers on board a United Airlines flight at Chicago international airport after he refused to give up his seat to an airline employee who needed to catch a connecting flight.

IMAGE: A screengrab from the video posted on Facebook by Surian Adyanthaya.