News
Business
Movies
Sports
Cricket
Get Ahead
Money Tips
Shopping
Sign in  |  Create a Rediffmail account
Rediff.com  » News » Akhilesh on why Congress is kept out of UP alliance

Akhilesh on why Congress is kept out of UP alliance 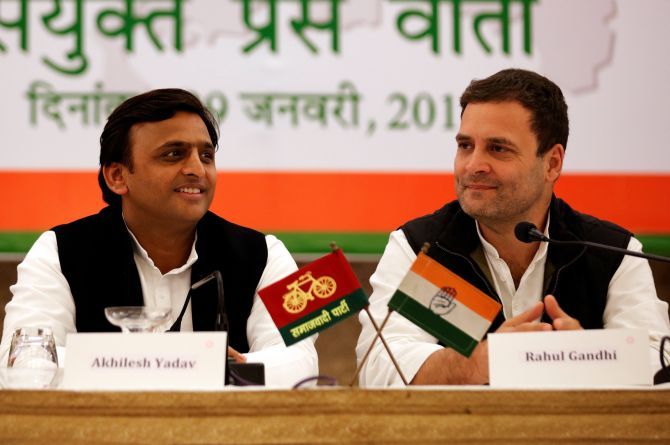 Samajwadi Party supremo Akhilesh Yadav has said that despite his ‘immense respect’ for Congress president Rahul Gandhi, the grand old party was kept out of the SP-Bahujan Samaj Party alliance in Uttar Pradesh to correct ‘poll arithmetic’ in order to defeat the Bharatiya Janata Party.

Without ruling out the possibility of working with the Congress after polls, Akhilesh said he has good relations with the party and would be 'happy' if the next prime minister was from his home state.

Asked if the SP was open to working with Congress after the polls, Akhilesh said, "We can't answer it right now. We will answer it after the elections. But I can say this much that the country wants a new prime minister and it will have one after polls."

Akhilesh was speaking exclusively to PTI during his visit to Kolkata for the January 19 united opposition rally.

“If you take out the number of seats in Uttar Pradesh, you will notice that the BJP government doesn't have the majority. BJP keeps talking about social engineering. So, I also decided to correct my poll arithmetic and did it through this alliance,” Akhilesh said.

He said that despite carrying out a lot of developmental works during his tenure as Uttar Pradesh chief minister, he lost the 2017 assembly elections as his poll arithmetic was not right.

“So, I decided to correct the arithmetic by taking along Bahujan Samaj Party and Rashtriya Lok Dal and left two seats for the Congress,” he said.

The Samajwadi Party and the Congress had joined hands in the 2017 assembly poll in Uttar Pradesh but lost to the BJP.

“In order to correct the arithmetic of UP and defeat BJP it (SP-BSP alliance) has been done. Should we lose seats (to BJP) just to pacify others,” he questioned.

Left out of the SP-BSP pre-poll tie-up in Uttar Pradesh, the Congress has announced that it would go it alone in all the 80 Lok Sabha seats in the state for the upcoming general election.

Congress’ decision to contest in all the 80 seats came in the backdrop of SP and BSP announcing their alliance in Uttar Pradesh, sharing 38 seats each, and leaving two seats for the smaller parties, besides leaving Rae Bareli and Amethi to United Progressive Alliance chairperson Sonia Gandhi and Congress chief Rahul Gandhi, respectively.

When asked whether keeping Congress out of the opposition alliance would dampen the prospects of opposition in the politically crucial state, Akhilesh said, "With this seat adjustment, we have further strengthened the opposition unity. We have kept two seats for Congress.

"Our relationship with Congress has always been good. The issue of relationship is different. The main issue is how to defeat BJP and I have worked towards that arithmetic.”

Akhilesh had earlier said that the SP’s alliance with the BSP and the Rashtriya Lok Dal was ‘final’ and there would be no issues as regards seat-sharing in the Lok Sabha polls, while ruling out any understanding with the Congress.

"We have left two seats for them. Now, they (Congress) have decided to fight in 78 other seats. If they want to fight it is up to them. We have nothing to say about it," he said.

When asked if the alliance would field candidates in the changed scenario as the Congress has decided to contest in all the 80 seats, he said SP-BSP will not do so in Rae Bareli and Amethi.

Akhilesh, however, maintained that keeping Congress out of alliance and giving them just two seats will not have any impact on the opposition vote share in the polls.

When asked to comment on Rahul Gandhi's remarks that he has ‘tremendous respect’ for the leaders of SP and BSP, Akhilesh said that he also has immense respect for Rahul Gandhi.

“Anybody from any part of the country can become the next prime minister. But it would be good if the next PM is from Uttar Pradesh because there is a notion that those who want to become PM fights from UP or increases its tally from this state,” he said.

Asked who is his first choice as PM - BSP chief Mayawati or Trinamool Congress supremo Mamata Banerjee -- Akhilesh refused to give a direct reply and said efforts should be made to elect a new prime minister and some issues can be discussed after the polls.

Akhilesh, however, sounded confident that regional parties which have come together at the January 19 Brigade Parade Grounds rally in Kolkata organised by the Trinamool Congress would stay together even after the polls.