AIADMK goes to police against Sasikala, alleges conspiracy to unleash violence in TN

Ahead of expelled leader Sasikala's return on February 8 to Tamil Nadu from Karnataka, the ruling All India Anna Dravida Munnetra Kazhagam on Saturday lodged a complaint with police against her camp alleging a 'conspiracy' to unleash 'violence' and sought action to ensure peace in the state. While Amma Makkal Munnetra Kazhagam chief and Sasikala's nephew Dhinakaran rubbished the conspiracy allegation as defamatory and lies, the police department warned of action against 'activities contrary to law.'

The AIADMK's allegation comes ahead of her return to Tamil Nadu from Bengaluru after her recovery from COVID-19 and following completion of her jail term in a corruption case.

In a release, the party said the top two leaders advised office-beareres to work unitedly with vigil to ensure victory for the party in the assembly elections due in April or May by taking the 'historic' achievements of the government to the people.

Party spokesperson and former Minister Vaigaichelvan told reporters that there was no discussion on 'Sasikala' factor at all.

To a question, he said if anyone from the AIADMK met her they would be dismissed from the party.

Law Minister C Ve Shanmugam said a complaint has been submitted with police seeking to "thwart a conspiracy to unleash violence and protect the lives of Tamil Nadu people and properties from Sasikala and Dhinakaran and ensure peace."

Flanked by his Cabinet colleagues and party veteran E Madhusudhanan, Shanmugam alleged the conspiracy has been hatched to create 'violence' by using AIADMK's name and flag and then blame the ruling party for it.

'Intimidatory' remarks, tantamount to creating violence in the state have been made by Dhinakaran and his supporters, he alleged.

Speaking to reporters after submitting the complaint at the office of the Director General of Police, the minister said Dhinakaran had claimed that they could not be prevented from using the AIADMK's flag even if they went to the state police chief or the armed forces.

Dhinakaran and Sasikala's supporters have also warned of turning into 'human bombs,' which put at risk Tamil Nadu, its people and peace, he alleged.

Dhinakaran dismissed the allegation as 'distortion,' lies and defamatory.

In a statement, the AMMK leader claimed that police department has accorded sanction to the party's plan to accord reception to Sasikala at several places in Tamil Nadu on Monday.

The AMMK has already announced a grand reception for Sasikala right from the start of Tamil Nadu border near Hosur.

The police department, without naming anyone, in a statement said it has got information that some were planning to take law into their own hands and cause a breach of public tranquility and disrupt traffic movement.

The state police warned of action against those who involved in such unlawful activites and this is seen as a warning to the AMMK following the AIADMK's complaint.

On the previous complaint against Sasikala, Shanmugam said it was connected to her use of party flag and AIADMK's strong objection to it and the present one pertained to conspiracy to stoke violence.

Signalling a tough stand against Sasikala, the AIADMK had days ago lodged a complaint with the DGP office against use of its flag by her and sought action.

Shanmugam said the true AIADMK was the one steered by presidium chairman E Madhusudhanan and top leaders O Panneerselvam and K Palaniswami.

This was made amply clear in a Supreme Court verdict in a matter related to the AIADMK's two-leaves symbol in which Sasikala-Dhinakaran were also parties, he said.

Following the verdict, the party fought by-elections and the 2019 Lok Sabha elections as well with the two-leaves symbol, he recalled.

Days ago, a war of words broke out between the AIADMK and AMMK after the ruling party's flag was spotted on a car used by Sasikala in Bengaluru.

While AIADMK maintained that she was not even a party member and had no right to use the flag and went to police, AMMK claimed that she was 'AIADMK general secretary.'

It said it would continue its fight to 'retrieve' the AIADMK legally and democratically. 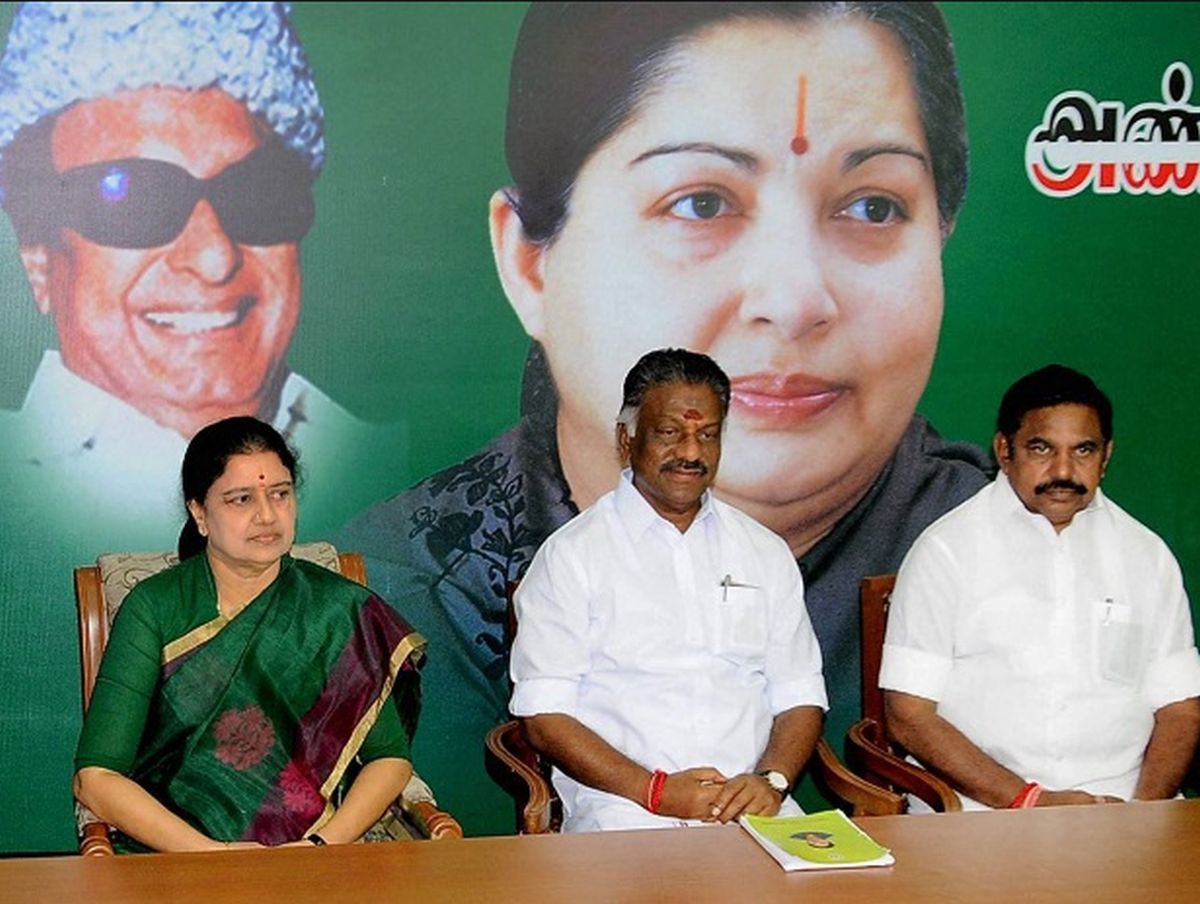