Agni-5 ICBM will be ready next year: DRDO

India is on course to test-fire the over 5,000 km range nuclear-capable Agni-5 missile next year and a successful mission would put the country in an elite club of nations with Inter-Continental Ballistic Missile (ICBM) capabilities.

"Work is progressing satisfactorily in the development of Agni-5, which is expected to become a reality next year. With this, DRDO would have given India a comprehensive indigenous strategic capability, available with only a few nations of the world," DRDO chief V K Saraswat said at the National Technology Day awards function here. Agni-5 is the country's most ambitious strategic missile.

Agni-5 will be the first canistered road-mobile ballistic missile--with a range of over 5,000 km--in the country's military arsenal, bringing possible targets in the whole of

China and Pakistan within striking range. The missile is likely to be tested early next year.

Missiles which are capable of being launched from canisters can be fired from multiple platforms and are easily transportable by road. As a result, Agni-5 can reach every

continent except North and South America from various places across India.

Commenting on the Indian missile programme, Saraswat said, "the success of Agni-3 and other tests have confirmed India's strategic deterrence capability, which could not have been possible without the preceding developmental efforts in these programmes."

Agni-5 is similar to the Dongfeng-31A that created ripples during China's National Day Military Parade in Beijing on October 1 last. India's current long-range missile, the

Agni-3, a non-canisterised missile, can only be moved with difficulty from one place to another.

The Agni-5 is specially tailored for road-mobility, according to defence scientists. 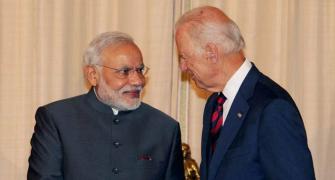