Groups of farmers move back to protest sites, thousands still in Delhi

Some groups of farmers started going back to their respective sit-in sites on Tuesday evening after hours of chaos during their tractor parade against the farm laws, but thousands of other protesters were still in several areas, including ITO, Nangloi and Mukarba Chowk, of the national capital. 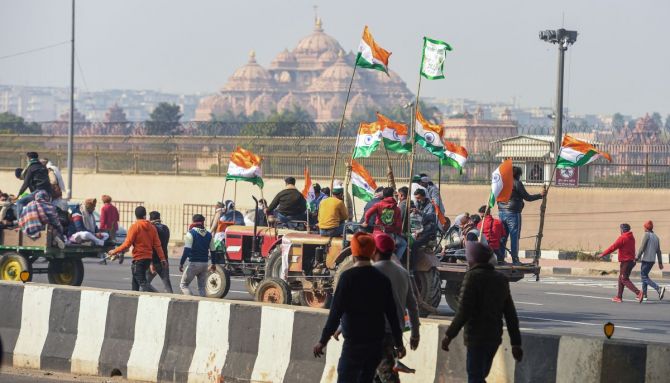 Hundreds of farmers were sitting at the ITO crossing and many, who entered the city from the Singhu border protest site, were moving towards Delhi's Outer Ring Road.

Farmers were seen moving back in batches to Tikri and Ghazipur border protest sites on Tuesday evening.

Earlier, wielding sticks and clubs and holding the tricolour and union flags, tens of thousands of farmers atop tractors broke barriers, clashed with police and entered the city from various points to lay siege to the Red Fort and climb the flagpole on Republic Day on Tuesday.

A protesting farmer died after his tractor overturned at ITO during the farmers' tractor parade on Tuesday, police said.

The farmers draped the body in the tricolour and kept it at the ITO crossing, not allowing the police to send it for post-mortem.

"We have finally gained entry into Delhi after four months -- two in Punjab and two at the Delhi border. The mood is clear, we have come here to stay. There's no point in going back to where we started," Amarjeet Singh, 62, a protesting farmer, said.

The Delhi Police resorted to baton charge and firing of tear gas shells on farmers at Nangloi Chowk in West Delhi when they tried to deviate from the pre-agreed route to enter the national capital during their protest. 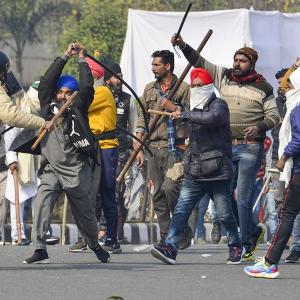