The Centre will challenge in the Supreme Court the order of the Andhra Pradesh high court striking down its 4.5 per cent sub-quota to minorities within Other Backward Classes reservation in central educational institutions and jobs, saying the decision was based on religious grounds.

"We will go to the Supreme Court by way of a Special Leave Petition against the Andhra Pradesh high court order," Union Minister for Law and Minority Affairs Salman Khurshid told reporters.

He said that the government would like to address the matter with a "sense of urgency".

"The Attorney General will come only next week and then we can take a call on how to go on it. We want to go as quickly as possible," Khurshid said.

The high court had observed on Monday that no evidence was shown to it to justify the classification of these religious minorities as a homogeneous group or as more backward classes deserving some special treatment.

Khurshid, however, said that while the court has rightly stated that community cannot be given reservation only on the basis of religion, he sought to clarify, "We have made reservation on a share of backward classes."

"Yes, in the Constitution you cannot make religion the only criteria for giving reservation to a community. Minority is not just a religion, it is also linguistic. The expression of the word minority is both religious and linguistic," he argued.

The minister said that the government did not include any new caste from the minorities in the OBC list but did it entirely on the basis of the Mandal Commission, which had suggested 27 per cent reservation for OBCs.

"Backward minorities have not got more than they are already allowed to get as per their population. 4.5 per cent of reservation is only among those castes included in the OBC list from the minorities. It is only their share in the 27 per cent reservation," Khurshid said.

Khurshid also rejected contentions that the high court order was a setback to the government.

"No setback at all," he said, adding that the process of reservation was part of affirmative action.

The minister was hopeful that this matter would be referred to a Constitution Bench of the Supreme Court like the previous decision of the Andhra Pradesh high court on the issue of minority reservation in the state.

Khurshid also downplayed contentions that the high court order annulling the government's decision of 4.5 per cent reservation for minorities has cast a shadow on large number of students seeking admissions in IITs, who benefitted from it.

The minister also referred to an earlier intervention by the Supreme Court, in which the court had ensured that those who have already secured admissions would not be affected by an earlier high court order on the reservation issue.

Regarding the court's criticism that the government handled the issue in a "casual" manner, Khurshid said it was not clear whether the court was referring to the policy aspect of the issue or the advocacy aspect.

He said it was not the first time that the Andhra Pradesh high court has struck down such an order. On an earlier occasions also, the AP high court had struck down the state government's order to provide a quota. K

Khurshid parried questions on the issue of reservation for Dalit Christians and Dalit Muslims, a recommendation made by the Ranganath Mishra Commission.

"This is not the Supreme Court, or Cabinet or Parliament. I can discuss those decisions, which have been taken," a visibly upset Khurshid retorted when asked why the  government was shy of supporting this measure.

Pressed further on the issue, he asked, "Is this press conference mine or yours? If it is mine, you have to listen to what I say. The matter is before the Supreme Court...When any decision of the Supreme Court comes and when we do something, we will tell you."

The minister also rejected contentions that the government announced the 4.5 percent reservation for minorities keeping in mind vote bank politics, ahead of the Uttar Pradesh assembly elections.

"If that is the case, why are we taking it up now? There is no election. Why do we want to approach the Supreme Court over it," Khurshid asked.

The minister also chose the occasion to highlight the performance of the minority affairs ministry in the 11th plan that concluded recently.

In a two-page note, he said that ministry awarded over 1.41 scholarships exceeding the target of over 93 lakh scholarships and these schemes were a huge success.

The note also listed the 4.5 per cent reservation provided to backward minorities in government jobs and admissions to educational institutions as major achievements of the government during the 11th plan period, besides increase in priority sector lending to minorities from 10.6 per cent to 14.83 per cent.

The minister also said that the recruitment of minorities in central government jobs and PSUs has gone up from 6.93 per cent to 11.99 per cent.

Khurshid also listed the creation of National Data Bank, the increase in the fund of Maulana Azad Educational Foundation from Rs 200 crore to Rs 750 crore and that of the National Minority Development Finance Corporation from Rs 375 crore to Rs 875 crore as achievements of his ministry. 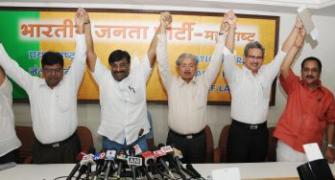 BJP, Sena, RPI tell Mumbaikars to observe bandh
MUST READ: How much ministers splurged on petrol

I have right to confront witnesses, says Sajjan