Adanis deny being in the race for Rajya Sabha

The race for Rajya Sabha seats in the biennial election in Andhra Pradesh, slated for June 10, took an interesting turn on Sunday with the Adani group debunking reports that either Gautam Adani or his wife Priti would be given a seat.

For several months, there has been speculation among political circles in Amaravati that Priti Adani was most likely to be given one of the four Rajya Sabha seats on behalf of the ruling Yuvajana Sramika Rythu Congress (YSRC).

The Adani group has been executing various projects in the state and Gautam Adani had personal interaction with YSRC president and Chief Minister Y S Jagan Mohan Reddy on a few recent occasions, triggering the speculation.

The group, however, issued a statement on Sunday saying such reports were 'blatantly false'.

'It is unfortunate to see vested interests dragging our name into such speculative media reports. Neither Gautam Adani or Priti Adani nor any member of the Adani family has interest in a political career or in joining any political group,' the statement said.

Interestingly, the Adani statement gave rise to fresh talk about a new prospective candidate -- another industrialist Chalamalasetti Sunil, who joined the YSRC after unsuccessfully contesting the Kakinada Lok Sabha seat as Telugu Desam Party nominee in 2019.

Sunil's Greenko Energy is executing an integrated renewable energy storage project in Kurnool district, touted to be the first-of-its-kind in the world.

Incidentally, Jagan will be visiting the project on May 17.

Given the caste calculations, the choice may fall on Sunil, now that Adani is no longer in the race, YSRC sources noted.

Rumour mills had the name of another big businessman from Telangana in circulation, as he is close to Jagan, but his name also did the rounds as a prospective candidate of Bharatiya Janata Party from another state.

If these two business bigwigs are not considered, there is a long list of aspirants within the YSRC for a Rajya Sabha seat.

With a strength of 151 MLAs of its own, and supported by four rebels of opposition TDP and Jana Sena, the YSRC will comfortably win all four Rajya Sabha seats that fall vacant in June, a gain of three.

YSRC Parliamentary Party leader V Vijayasai Reddy, one of the four due to retire, is set be re-nominated.

For two other seats, the names of Killi Kriparani, former Union Minister of State, and Beeda Mastan Rao are said to be under consideration. Both belong to the backward classes, with Kriparani having the added advantage of being a woman.

The YSRC has so far not nominated a woman for Rajya Sabha and the gender has currently no representation from the State in the Upper House of Parliament.

"So Kriparani should be a natural choice," a senior YSRC leader pointed out.

Notification for the biennial election will be issued on May 24 and the last date for filing nominations is May 31.

As the chief minister is set to embark on a 10-day official-cum-private trip to Europe from May 20, YSRC leaders expect him to finalise the Rajya Sabha candidates before flying off.

In all probability, the election could be an unanimous affair as the TDP, with just 20 MLAs, does not stand any chance.

The YSRC's strength in the Council of States will swell to nine after the biennial election.

The TDP and the BJP will be left with only one Rajya Sabha member each. 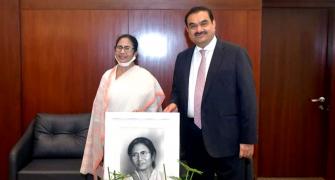 Adani seeks to clear the air on 'Mauritius funds'