The roommate of Payal Tadvi, a junior doctor at a hospital in Mumbai who ended her life following caste-based harassment, has alleged that the three accused used to taunt them saying they got admission in the medical course as they were from a reserved category. The three accused doctors -- Hema Ahuja, Bhakti Meher and Ankita Khandelwal -- were arrested on May 29. They are in judicial custody since then.

The crime branch on Tuesday filed an over 1,800-page chargesheet against the three of Tadvi's seniors accused of abetting her suicide. It contains a copy of the three-page suicide note allegedly written by Tadvi before hanging herself in hostel room.

The chargesheet relies heavily on the suicide note.

Tadvi's roommate and friend Snehal in her statement to the police, which is part of the chargesheet, has said Ahuja, Meher and Khandelwal used to harass and ill-treat them in front of other juniors, hospital staff and patients.

"The trio (Ahuja, Meher and Khandelwal) used to call me dumb and Tadvi oversmart and used to make fun of us," Snehal said in her statement.

She added that in May, Ahuja asked Tadvi and Snehal how much had they scored in the NEET and taunted them saying they got admission in medical course as they were from a reserved category.

Tadvi's family had alleged that Ahuja, Meher and Khandelwal ragged her and hurled casteist slurs at her, forcing Tadvi to take the extreme step.

The suicide note begins with Tadvi apologising to her parents for taking her own life, saying things at the hospital have become "unbearable".

"I hold Hema Ahuja, Bhakti Meher and Ankita Khandelwal responsible for my condition and that of Snehal Shinde's (victim's colleague and friend)," the note said.

It added that Tadvi tried several times to speak to other seniors about the treatment meted out to her, but no action was taken.

"I literally do not see any way. For the last one year we have been bearing them, hoping that one day this will end. But now I can only see the end... there is no way out of it," the note said.

In the note, Tadvi wondered what was the personal animosity between her and the three senior doctors that they were troubling her.

"I have taken this decision after trying out everything. I found out that no one is there to stand for us, support us in this department," the note said.

It further said that Tadvi and her friend, who is a witness in the case against the trio, were humiliated before patients, staff and other doctors even when they were not at fault.

"I have lost my professional and personal life because it has been declared by them that they will not let me learn anything till they are here in Nair," the note said.

Tadvi further wrote in the note that she was not allowed to handle the labour room as Ahuja, Meher and Khandelwal do not find her efficient.

"Despite putting all efforts, the condition is not improving but I am becoming mentally disturbed. Environment is not healthy to work and I've lost hope for anything to change as I know it won't," the note said.

At the end of the note, Tadvi apologised to her friend Snehal for leaving her alone with the three doctors.

Snehal told police that on May 22 evening, Ahuja told her that Tadvi had locked herself in her hostel room and was not opening the door.

When they broke the door open, they found Tadvi hanging from the ceiling, she said.

The trio has been booked under IPC sections 306 (abetment to suicide) and 201 (destruction of evidence) and under the Maharashtra Prohibition of Ragging Act and the Scheduled Castes and the Scheduled
Tribes (Prevention of Atrocities). 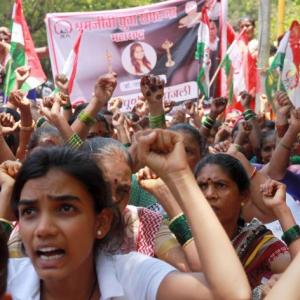