AC local train fare in Mumbai to be slashed by 50%: Minister

The fare of air-conditioned local trains in Mumbai will be reduced by 50 per cent, Union Minister of State for Railways Raosaheb Danve announced here on Friday. Following a long-pending demand, the existing minimum fare of Rs 65 for a distance of 5 km for AC trains will be reduced to Rs 30, he said.

A notification issued by the railway board in the evening said new fares would come into effect from May 5.

Danve was speaking at the inauguration of the restored heritage building of the Byculla railway station in central Mumbai in the presence of BJP leader Devendra Fadnavis.

The railway ministry had received suggestions that the existing fare be reduced by at least 20-30 per cent, the minister said.

Around 80 AC local train services are operated on Central and Western Railway routes in the Mumbai region every day.

As per Danve, the fare between Chhatrapati Shivaji Maharaj Terminus-Thane (34 km) would be slashed to Rs 90 from the existing Rs 130.

"Keeping the common man in focus, I and our minister Ashwini ji (railway minister Ashwini Vaishnaw) decided to reduce the daily single journey fare of AC local train by 50 per cent to give a relief to Mumbai passengers," Danve said.

At present, the single journey fare of AC locals ranges between Rs 65 to 240.

Speaking to reporters later, Danve said the Railway Board, the decision-making body of the Indian Railways, will issue a notification about fare reduction after completing legal formalities.

Local trains, which are the lifeline of India's financial capital, carry over 90 lakh passengers through 3,000 services every day, Danve said.

Later in the day, the railway board issued a notification about reduction in the single journey fare of AC locals and that for ordinary first class journey.

New fares will be effective from May 5, it said.

"There shall be no change in season ticket basic fare for AC and First class of ordinary services running over the suburban section," the notification stated.

Danve, meanwhile, also claimed that between 2009 to 2014, Maharashtra was given Rs 1,100 crore in the railway budget, but the Modi government allotted Rs 11,000 crore in this year's budget alone.

All the broad-gauge railway lines in the country will be electrified by 2023, the junior railway minister said, adding that 1,900 km of electrification has been carried out since the Modi government came to power.

The entire route of Konkan Railway, which stretches across Maharashtra, Goa and Karnataka, has been electrified and it will be inaugurated in the next one or two weeks, he said.

On Thursday, the Niti Aayog gave the nod for Pune-Nashik railway line project, Danve said, adding that the proposal will be placed before the cabinet soon and work will start.

As many as 25 railway stations in Maharashtra are being upgraded, he added.

Fadnavis in his speech said besides the Byculla station, several heritage sites in Mumbai need to be conserved and restored, and appealed to the people to maintain the restored station building properly.

The project to restore the Byculla station building, one of India's oldest railway stations, started in 2019.

Bharatiya Janata Party leader Shaina NC, a trustee of the I LOVE MUMBAI trust, with support of Bajaj trust groups and Abha Narain Lambah Associates carried out the restoration project.

Minal Bajaj and Niraj Bajaj of Bajaj Group and Jamnalal Bajaj Foundation funded the project which cost over Rs 4 crore. It was to be completed in 18 months, but due to the pandemic it took three years. 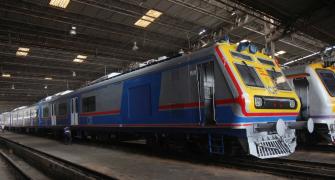 How cool is that! Mumbai gets its first-ever AC local 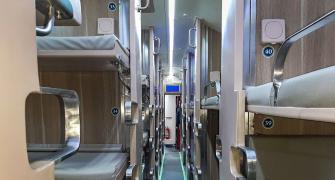 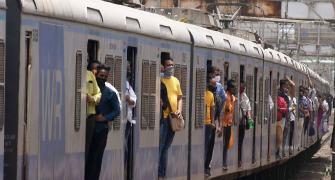 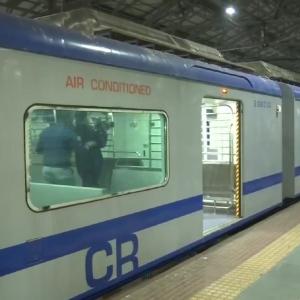