Aarushi-Hemraj murder trial to begin from May 11

The formal trial of the sensational 2008 twin murders of dentist couple Rajkesh and Nupur Talwar's teenaged daughter Aarushi and their domestic help Hemraj would begin from May 11 at a sessions court in Ghaziabad.

Special Judicial Magistrate Preeti Singh today committed the case to the court of District and Session Judge Bharat Bhushan saying she does not have the requisite power under  the Criminal Procedure Code to hold the trial of a murder case, which can only be tried by a sessions court.

SJM Singh sent up the case for sessions trial, rejecting a plea by the dentist couple that the case cannot be put to trial as yet as they have not been supplied all the documents by the prosecution.

The court, however, rejected their pleas agreeing with the Central Bureau of Investigations contentions that they were only trying to delay the trial.

Opposing Talwars' plea for supply of all the prosecution documents to them, the CBI said all the relevant documents have already been supplied to them and as per a Supreme Court ruling they are not entitled to all the documents filed by the CBI in the court.

The CBI counsel said the agency had examined a total of 153 witnesses and statements of 90 out of them have already been given to Talwars, besides the 23 photographs on which the agency is relying for their prosecution.

The court, however, gave Talwars the liberty to inspect all the documents.

Both Nupur and her husband Rajesh Talwar were present during the hearing. Nupur was later taken to Dasna Jail. dditional District and Sessions Judge S Lal had on May 2 denied bail to Nupur in the twin murder case. Denying her the bail, the judge had "there is a prima facie evidence to suggest the involvement of the accused."

Aarushi was murdered on the intervening night of May 16-17, 2008 at her Noida residence and the body of Hemraj was found on the terrace of the house the next day. 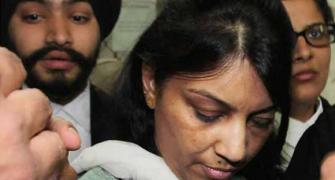 Aarushi case trial may be committed to sessions on May 9