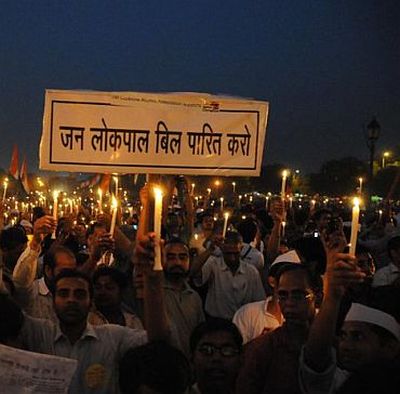 Aam Aadmi Party-led Delhi government is locked in a power struggle with the Centre and the Lt Governor. Kavita Chowdhury reports

The Aam Aadmi Party came to power in Delhi with promises of 'Jan Lokpal' and 'Swaraaj'. But the core issues that symbolised the party are on the back burner, as the AAP-led Delhi government is locked in a power struggle with the Centre and the Lt Governor.

Incidentally, the Jan Lokpal Bill was considered so vital to the party's agenda that the AAP-led government had quit office in 49 days over it.

The AAP won 67 out of 70 seats but the Jan Lokpal has not yet tabled in the Delhi Assembly. Government sources say the party is still contemplating of whether to bring it in the upcoming Budget session. The AAP had envisioned the Delhi Lokpal with powers to ensure time-bound investigation in matters of corruption and to initiate investigations and prosecution against those charged with corruption. AAP in its 70-point agenda had also promised to bring in a Citizens' Charter in all government offices in the capital and assured protection to whistleblowers.

Anti-corruption watch dog Delhi Lokyaukta has been headless for the past year. "The biggest question is that the party, which resigned its government in only 49 days on the issue of the Janlokpal, has this time not appointed a Lokayukta even 120 days after coming to power. There was an existing Lokayukta during our government in Delhi; why has the AAP not appointed somebody?" asked Delhi Pradesh Congress chief Ajay Maken.

The Bharatiya Janata Party has been attacking the AAP right from the day it sacked its own internal Lokpal Admiral Ramdas. BJP chief Satish Upadhyay said: "Kejriwal used to talk a lot about Lokpal in governance and polity during his previous tenure as Delhi chief minister. But once in power again, he has now put the idea of the Lokpal in government in the freezer."

The AAP-led government is also dealing with the civic mess in the city caused by the financial bankruptcy of the BJP-run municipal corporations. To top it all, its image has taken a beating due to the credentials of its legislators being questioned; its former law minister Jitender Singh Tomar has been arrested for submitting a fake law degree.

Swaraaj was another foundation pillar of the party. AAP had promised it would bring in the bill assuring devolution of powers as soon as it comes to power. However, its founding member Prashant Bhushan and ideologue Yogendra Yadav accused AAP chief Arvind Kejriwal of 'authoritarian' tendencies, centralisation of power and of strangulating the dreams of ‘swaraaj’. The duo, who ultimately went on to form the AAP splinter group 'Swaraaj Abhiyaan, had said the aim was to restore ‘swaraaj’ and inner-party democracy aspects the AAP had moved away from, after getting to power.

AAP leaders, however, reject this criticism claiming the Delhi government has already started taking steps to devolve power directly to citizens. Its pilot 'janta ka budget' exercise in 11 constituencies where citizens through Mohalla Sabhas decide developmental works in their locality was a step in that direction.