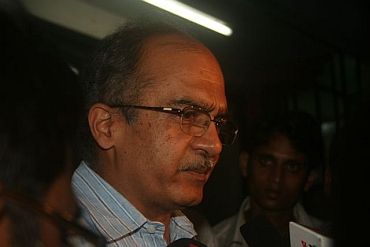 The Aam Aadmi Party on Sunday removed party's internal Lokpal Admiral L Ramdas and Prashant Bhushan as the chief of the national disciplinary committee, a day after the latter and senior leader Yogendra Yadav were expelled from the national executive.

"All these people have given their consent to be part of the party's Lokpal panel," party's national secretary Pankaj Gupta said.

The AAP National Executive, while sacking Bhushan from the disciplinary committee, decided to replace him by a three -member panel headed by Dinesh Waghela. The other members are Arvind Kejriwal loyalist Ashish Khetan and national secretary Pankaj Gupta.

The removal of Ramdas came a day after he was sent an SMS asking him not to attend the national council meeting to avoid ‘confrontation’.

Miffed over the snub, he then wrote a letter to the political affairs committee criticising the leadership. Ramdas said he had come from his village in Maharashtra to attend the meet. However, he said he would not attend the meet to ‘honour’ the party's request.

The AAP body also announced a committee that will take care of the April 22 agitation against the Land Acquisition Bill, when the party plans to gherao Parliament on the issue.

The party has also formed a committee under the eadership of senior leader and PAC member Sanjay Singh to look into expansion of the organisation in other states.

Miffed over the snub, Ramdas then wrote a letter to the PAC criticising the leadership. Kejriwal has been upset over missives sent by Ramdas and this led to he being asked not to attend the National Council meet.

Ramdas said he had come from his village in Maharashtra to attend the meet. However, he said he would not attend the meet to ‘honour’ the party's request.

Removal of Bhushan and Yadav from key panels is being seen as a precursor to their expulsion from the party.

The two leaders yesterday termed their sacking from the party's national executive a ‘farce and illegal’, saying they might seek legal recourse. They also hinted at floating another party if required, claiming the support of a big section of AAP workers.

The nearly month-long war between Kejriwal and the two leaders ended with a showdown on Saturday with the two founder-members being ousted in a 247-8 vote at the 311-member NC meet that was marred by chaos, charges and counter charges

The AAP made public Kejriwal's speech at the National Council on Saturday with the video being posted on YouTube and tweeted on AAP's official twitter handle.