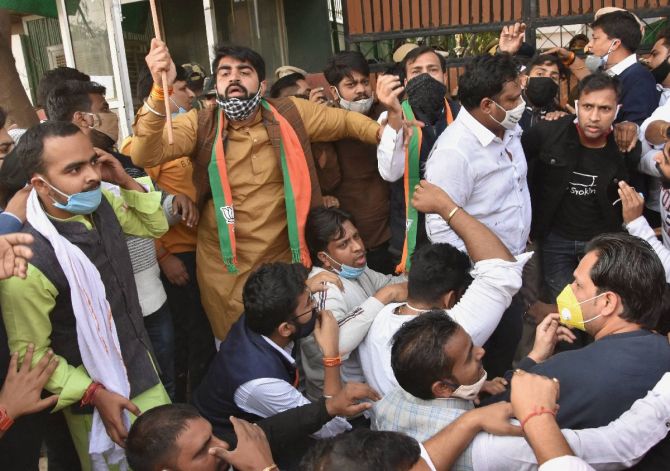 The Delhi BJP, however, refuted the allegations, saying their protest was peaceful.

The Delhi Police also said the allegations that the gate of the deputy CM's residence was damaged or broken are 'incorrect' and a case has been registered under appropriate sections in the matter.

The Delhi Commission for Women said it has set up an inquiry into the incident and has also sought response from the Delhi police.

The BJP workers earlier staged a protest near Sisodia's residence a day after its leaders lodged a police complaint alleging that there was a 'conspiracy to kill' mayors and leaders of the party-led municipal corporations.

Chief Minister Arvind Kejriwal condemned the alleged attack on Sisodia's residence and asked why is BJP getting so desperate by the day in Delhi.

'The goons entered his house in police presence when he was away. Why is BJP getting so desperate by the day in Delhi?' Kejriwal tweeted.

Sisodia also took to Twitter and said, 'Today, in my absence, BJP goons broke the doors of my house and entered inside and tried to attack my wife and children.@AmitShah, if you lost in politics in Delhi today, will you tackle us in this way?'

Addressing a press conference, AAP spokesperson Saurabh Bhardwaj alleged that the police did not stop the 'goons' from entering Sisodia's residence and even removed the barricades around the house.

He also played a purported video showing the area outside Sisodia's residence in which a group of people were seen forcefully entering inside.

'BJP goons attacked the house of the deputy chief minister while he was not at home. The Delhi Police helped the BJP goons in this act,' Bhardwaj added.

The police said the allegations that the gate of Sisodia's residence was damaged or broken are 'incorrect' and a case has been registered under appropriate sections in the matter.

'Based on complaint by C Arvind, Secretary to Dy CM Delhi, a proper offence has been registered by Delhi Police under appropriate sections of the law and investigation is going on. Allegations of gate damaged/broken are incorrect,' the Delhi police said in a tweet.

Atishi who also addressed the press conference called it a 'black day' in Delhi's political history.

"This is a black day in Delhi's political history that the Home Minister is now using his party goons and Delhi Police to attack the family of Aam Aadmi Party leader and Deputy Chief Minister Manish Sisodia in his absence from his residence," Atishi said.

"Delhi police didn't do anything to remove the protesters sitting there, but they had the power to stop 400 people from meeting the CM. Not even a single barricade was removed. Sitting MLA Akhilesh Pati Tripathi was attacked brutally, but they did not touch BJP workers," she claimed.

"It is very evident from today's incident that all the earlier ones too would have been orchestrated by Amit Shah. In the coming MCD elections, I am sure that the Delhiites will teach BJP ministers a tough lesson as they did in the 2020 elections," she claimed.

Reacting to the charges, Delhi BJP vice president Ashok Goel Devraha claimed AAP leaders were trying to divert attention from the 'conspiracy' to kill BJP mayors and other corporation leaders.

"We protested outside Sisodia''s residence to make it clear that the BJP workers are capable of answering any form of challenge," he said.

The Delhi BJP had on Wednesday lodged a police complaint against Sisodia and AAP leader Durgesh Pathak, alleging that they were conspiring to kill leaders of the party-ruled municipal corporations.

Pathak had rubbished the allegation, saying the BJP has a habit of mixing random audios with random videos to 'defame and malign' the image of people.

The Delhi Police further said they had received a request from Delhi BJP for organising a protest outside the house of Delhi Deputy CM Manish Sisodia on Mathura Road.

They rejected the request as no gathering or protest is allowed during COVID-19 pandemic.

"At 11.30 am, a group gathered at a barricade installed by Delhi Police near Deputy CM's house.

"A group of protesters jumped the barricade and entered inside the camp office of Deputy CM located in the house.

"The police staff on duty acted swiftly and held six persons who trespassed Deputy CM's house and were taken to Mandir Marg police station," they said. 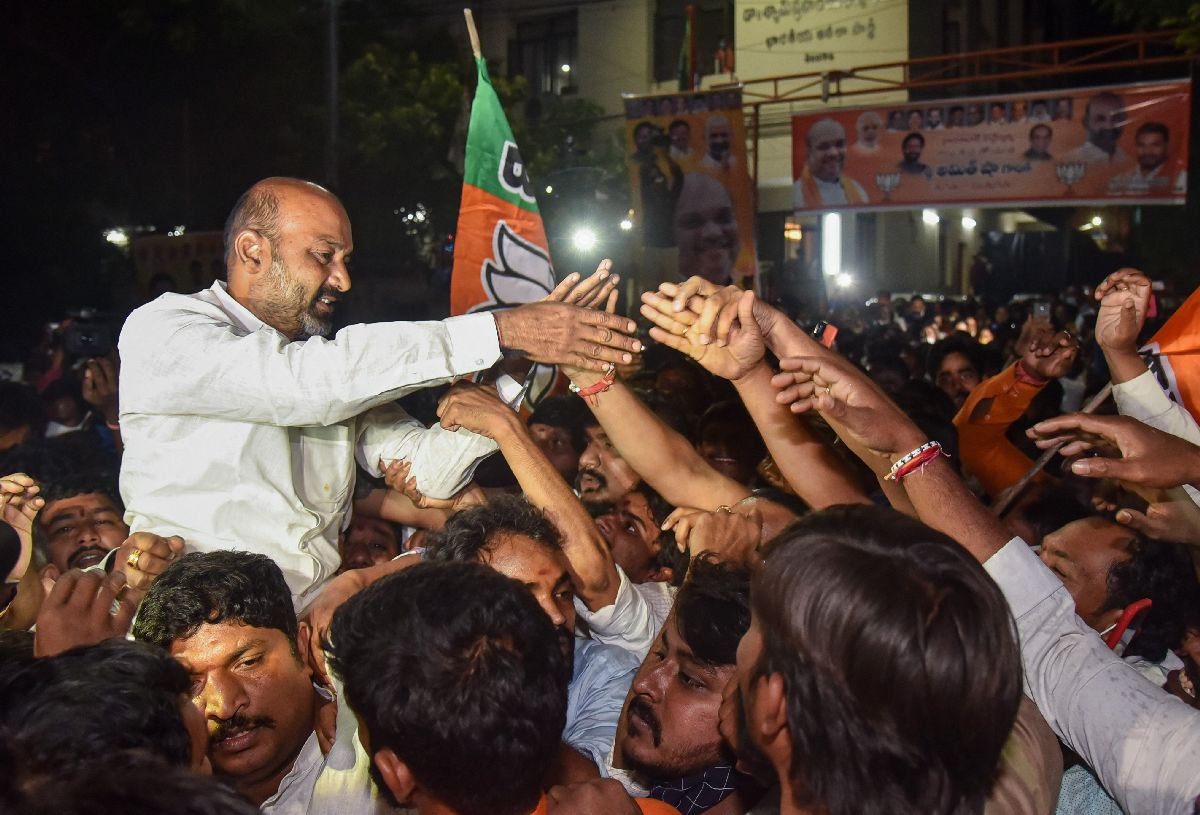 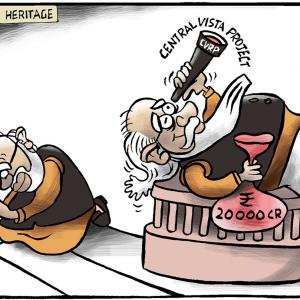