News
Business
Movies
Sports
Cricket
Get Ahead
Money Tips
Shopping
Sign in  |  Create a Rediffmail account
Rediff.com  » News » Why BJP won big in Hyderabad, and is on the way to win South India

Why BJP won big in Hyderabad, and is on the way to win South India

'They take each and every election with seriousness.'
'No other political party has that kind of cadre who is strongly aligned with the reason, motto and ideology of their party.' 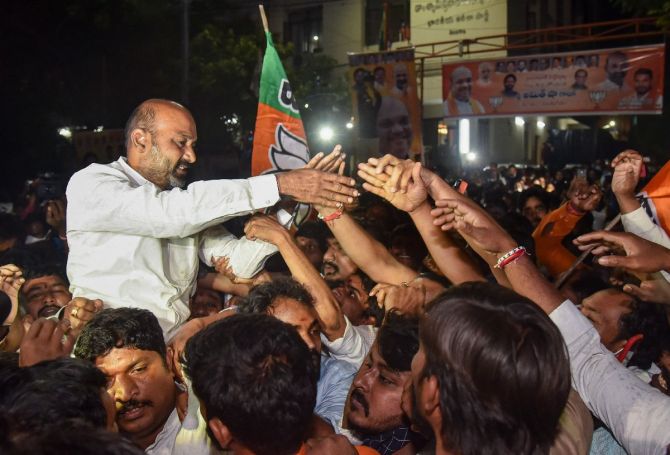 The Bharatiya Janata Party's electrifying campaign in the Greater Hyderabad Municipal Corporation election has made the BJP the second largest party in the civic body after the Telangana Rashtra Samiti.

The BJP's campaign focussed on polarising the electorate by calling All India Majlis-e-Ittehadul Muslimeen chief Asaduddin Owaisi 'an avatar of Jinnah', promising to end 'Nizam culture' and renaming Hyderabad as 'Bhagyanagar'.

In the previous GHMC poll the BJP had won a measly four seats, The TRS, which just last year won a big mandate in the assembly polls, has been forced to review its performance in the civic polls.

Dr Afroz Alam, professor and head of the political science department at Maulana Azad National University and the director of Social Exclusion and Public Policy, believes that the TRS ignored the BJP and focussed more on decimating the Telugu Desam Party and the Congress.

"The seats which the BJP won in the GHMC elections are heavily dominated by Andhra people, who were traditional TDP voters. The TRS bought those TDP leaders and the voters shifted their loyalty to the BJP," Dr Alam told Rediff.com's Syed Firdaus Ashraf.

What is your analysis of the outcome of the GHMC election?

Telangana is going to experience bipolar politics in the coming days. The Hyderabad local elections were a trailer to that competition.

Telangana was a multi-party state where the Congress, the All India Majlis-e-Ittehadul Muslimeen, the Telugu Desam Party and the TRS were contesting elections.

After the TRS came to power, they demolished all the Opposition parties.

And the fourth Opposition party, that is the BJP, which had no base in the state, came up from nowhere.

In a democracy, parties must contest elections to defeat their opponents, but not to destroy them.

The TRS, when they attained power, destroyed the Opposition. You can destroy Opposition parties but cannot destroy anti-incumbent votes.

Does it mean that the TRS created a vacuum which has been occupied by the BJP now?

Yes, that is what they did. You can buy the opponent politician, but you cannot buy anti-TRS voters who have different dynamics.

These voters were trying to find a way to vent their anger against the TRS. And they went to a party which had no base in Hyderabad at all.

In the 2014 election, when the TRS won, they lured Congress and TDP leaders to join them. Once you try to grab the entire Opposition space, the society will bounce back with whichever party finds any space.

The seats which the BJP won in the GHMC election are heavily dominated by Andhra people, who were traditional TDP voters.

the TRS bought those TDP leaders and the voters shifted their loyalty to the BJP.

Why could Chandrababu Naidu not hold back his leaders from going to the TRS?

They are not interested in Telangana politics. They have withdrawn as a party.

The TRS went heavily on the TDP by wooing their leaders and completely ignored the BJP's presence.

The TDP even lost their cadre base in Hyderabad as most of them joined the TRS. So, Opposition voters had nowhere to go except to the BJP.

Did polarisation of voters help the BJP as their leaders even openly stated that they will do a 'surgical strike' in Asaduddin Owaisi's stronghold of Old Hyderabad?

Local elections are all about civic issues and the BJP had no work to show to the voters as they were not in power.

They did not come out with a civic policy but came out with divisive issues that polarised.

They were not looking at the GHMC election, but to export the campaign to West Bengal.

Therefore, they amplified the image of Owaisi by stating that all Muslims are voting for the AIMIM so the Hindus must vote for the BJP, which represents Hindu interests.

When you appeal to the voters on a grand narrative of religion, then it affects them very deeply and they somewhere lose their rationality.

The BJP knew they will get the anti-TRS votes, but they wanted some additional 10 per cent votes, therefore they got into this sensationalism.

During the elections, Congress and TDP cadres were completely inactive while the BJP sent its top leaders to campaign in Hyderabad.

This created an image among the voters that the BJP was very serious about the election and can win too, unlike the Congress and the TDP.

What other mistakes did the TRS commit?

They became lazy in the last week of the campaign as they were certain that they will win.

They did not activate their cadres to bring the voters to the booth.

In the last assembly polls, the BJP were reduced to one MLA from five and the TRS won big.

They thought the BJP had gone away from the state. They did not realise that in general elections, the BJP won four parliamentary seats in the state.

The TRS was more involved in dismantling the Congress and TDP in the state and they thought the BJP will take time to develop as a party in Telangana.

This was a simple failure of their strategy. One also has to take into consideration the traditional caste conflict.

The TRS belongs to the Velama community and the other two castes which were dominant earlier were the Kammas and Reddys.

The power has now gone to the Velama community.

The Reddys, who were the traditional vote bank of the Congress, voted heavily this time for the BJP.

(So) there is a caste element (also) to the BJP's victory. And you see, there is an increase of 25 per cent of votes for the BJP in this election.

It secured around 10 per cent votes last time.

The TDP, which had 13 per cent votes last time, got reduced to 1.6 per cent. There was 20 per cent of anti-TRS votes sitting there with no political party to claim it, and the the BJP stepped in.

The AIMIM was very strategic this time. They knew their strengths and resources.

They did not want to antagonise the TRS as there was a tacit understanding between them.

If the AIMIM had contested 150 seats, then in that situation the fight would have been a bipolar contest and the BJP would have won a majority of seats.

The AIMIM remained concentrated on their strong areas.

Do you feel that the BJP won as there was no Opposition space, or did the people of Hyderabad vote on communal lines as the BJP polarised the election campaign?

Communal voting has always been there and there is no doubt that society is polarising very fast.

And it is because the space for the Opposition is shrinking.

In this scenario, when the AIMIM plays communal politics, it will naturally help the BJP and they know it.

After all, they are a political party and they will set a narrative to win the elections and they did that.

But then it does not mean that if there is no AIMIM, the BJP will not come to power. They will surely come to power because there is a fatigue against secularism that has set in in the country.

Voters are no longer interested in the narrative that is set by secular parties. And let me remind you, these voters were not secular, but they were communally harmonious before 2014.

I was offering namaz and wearing a skull cap. Hindus too were spiritual and were very much in their religion, but there was communication between the two communities.

There was celebration of the diversity and visiting each other's homes.

Earlier, this feeling was not there. There was a celebration of diversity of culture and believes.

And today, there is an attempt to curb it, though the entire society has not turned that way.

Do you feel this election has opened inroads for the BJP in South India?

There is no doubt about it. If you are walking without losing, then you will surely win.

The BJP has the cadre and they are not impatient. Their cadres work very hard on the ground.

They have strong convictions and have a goal to achieve.

If I visit rural areas in Telangana, I see their cadres work from morning to evening.

They are polarising society. They have micro management power. They have data-based study on every household.

They control mass media and social media. They control the narrative to win future elections.

They are not a political party which wins one election with seriousness and other elections with non-seriousness.

They take each and every election with seriousness. They maintain their consistency.

Even if the BJP gets one vote, they are serious about that one vote. Their cadres are fully charged up with their political ideology.

No other political party has that kind of cadre who is strongly aligned with the reason, motto and ideology of their party.

We are moving towards unipolarity of ideology.

Will their strategy work in Tamil Nadu and Kerala too?

This will work where there are Left voters. Left voters are radical voters. They do not hang in between.

They always switch towards the Right. You take the example of Tripura, Manipur and West Bengal. See the history of Left votes in India.

Wherever the Left vote has collapsed, it has gone to the Right. This happens because there is a Brahmanical domination in the Left.

Will it work against Jagan Reddy in Andhra Pradesh?

If you have to demolish a party then you have to create a transition phase. This is what happened with Jagan Mohan Reddy.

Their (BJP) cadres got mobilised to defeat the TDP first. In the same way, the BJP could not defeat the Left party on their own so their cadre got heavily mobilised to bring in Mamata Banerjee.

And now Mamata Banerjee is being challenged by them.

Similarly, in Tripura and Manipur they got in alliance with regional parties and later on co-opted them to rule the state.

You seriously believe that in 2011 Mamata was propped up by the BJP to take on the Left? Didn't she come on her own strength?

The BJP's first objective was to uproot the Left. The Rashtriya Swayamsevak Sangh and the right-wing people did not focus to launch their own party to defeat the Left.

The RSS was working in the tribal areas of West Bengal though. The BJP is the Bahujan Samaj Party in West Bengal now.

The Left rule was of that of political rule of upper castes and there was consensus.

Mamata was able to convince the lower middle class after the Singur episode.

The RSS cadres worked hard with the Adivasi Ashram. And moreover, Mamata tied up with Atal Bihari Vajpayee's National Democratic Alliance when she split with the Congress, if you recall.

Already, a lot of TMC leaders are quitting and joining the BJP. They have made huge inroads in West Bengal.

The BJP will surely give a tough fight to Mamata in West Bengal in the next election. 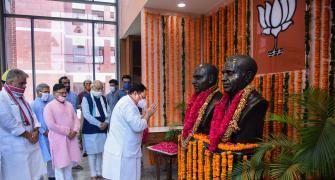 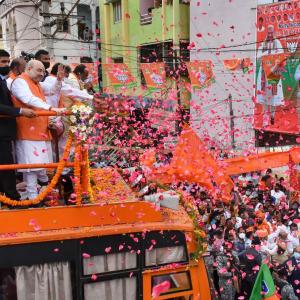