A group of an estimated 400 Maoists had ambushed security personnel who were part of a large contingent deployed for a special operation, leading to the killing of at least 22 personnel and injuries to 30 others, official sources said on Sunday. 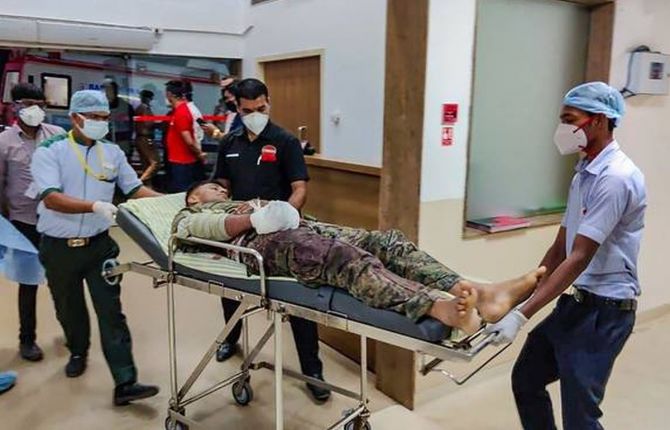 IMAGE: A security personnel is shifted for treatment after he was injured in an encounter with Naxals in Chhattisgarh's Bijapur district on April 3, 2021. Photograph: PTI Photo

They said the contingent of about 1,500 troops drawn from CRPF'S specialised jungle warfare unit CoBRA, some teams from its regular battalions, a unit of its Bastariya battalion, the Chhattisgarh Police affiliated District Reserve Guard and others had launched a search and destroy operation along the border of Bijapur-Sukma district around noon after they got inputs of some Maoists presence in the area.

At least 400 Naxals, an officer said, led by the most wanted Maoist commander and leader of the so-called 'People's Liberation Guerrilla Army battalion no 1'-- Hidma-- and his associate Sujatha are suspected to be behind the Saturday;s ambush that took place in an area that is a strong-hold of the ultras due to the difficult terrain, large tracts of forests and less number of security forces camps.

The Maoists rained bullets from light machine guns and used low-intensity improvised explosive devices to mount the attack that went on till evening.

He said that the Maoists carried their dead, estimated to be about 10-12, on tractor trolleys.

The total approved strength of security forces personnel for the operation was 790 and the rest were taken as auxiliary and support elements for the long haul operation, the sources said.

"Inputs were received that Naxals were undertaking their Tactical Counter Offensive Campaign campaign in the Jagargunda-Jongaguda-Tarrem axis, and hence security forces teams from six camps were deputed to intercept them.

"The Maoists drew the forces into an ambush with heavy gunfire soon after, and helicopter sorties were requisitioned to evacuate the injured personnel," a senior security officer told PTI.

He said the Maoists encircled the security personnel from three sides and a heavy gun-battle ensued in the jungles which are devoid of any foliage at present.

Another officer posted in Chhattisgarh said the operation was being monitored by two Inspector General rank officers of the state police and the Central Reserve Police Force from Jagdalpur in Bastar.

"The rescue choppers could not land in the ambush area around 2 PM when they were sent for a casualty evacuation mission as a heavy exchange of firing was taking place. The helicopter landed only around 5 PM to pick up the casualties," another officer said.

Out of the total 22 fatalities, the CRPF has lost eight men out of which seven are CoBRA commandos while one personnel is from the Bastariya battalion.

A CRPF Inspector is still missing, they said.

Officials said while maximum security forces personnel were killed due to bullet shots, one is suspected to have fainted and later died due to dehydration and other issues.

"The security forces personnel, especially CoBRA commandos fought very bravely and ensured that the Naxals could not prolong the ambush despite being at an advantage," the officer said.

The security personnel took guard against large trees and kept firing till they ran out of ammunition, he added.

At one location, he added, seven bodies of the troops were recovered and the tree trunks bore bullet shots, indicating that a heavy gun-battle took place in the area.

About two dozen sophisticated assault weapons of the killed personnel are also stated to have been looted by the Naxals even as security officials said the search of the area is still on and details are being collected from the ground. 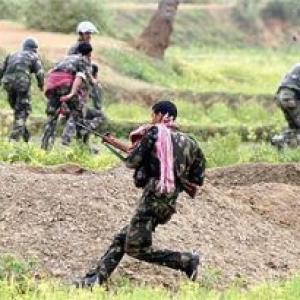 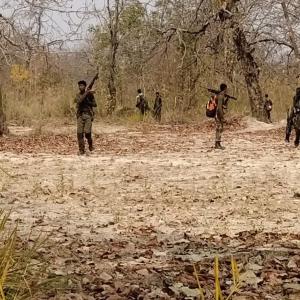