News
Business
Movies
Sports
Cricket
Get Ahead
Money Tips
Shopping
Sign in  |  Create a Rediffmail account
Rediff.com  » News » 'Naxals can sense the end is near'

'Maoists are enraged that the media is reporting the truth.'
'They want to physically isolate the media and psychologically isolate the villagers who have found the confidence to speak to the press about the real situation.'
'Like terrorism ended in Punjab, Naxalism will end in Chhattisgarh,' AIIMS doctor-turned IPS officer and SP of Dantewada, Dr Abhishek Pallava tells Rediff.com's Archana Masih. 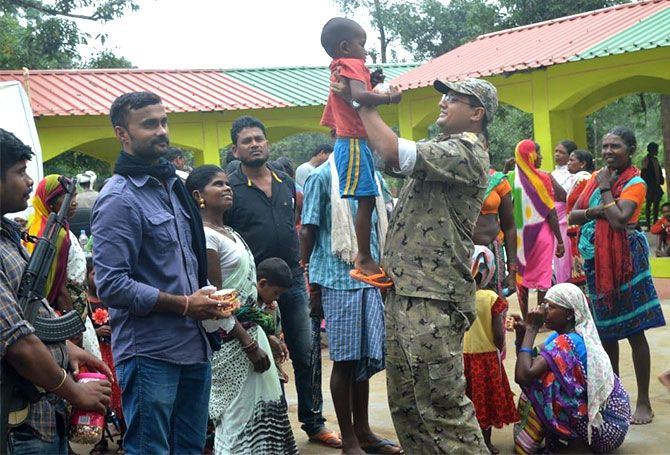 A little before video journalist Achyutanand Sahu was killed in an attack by a group of Naxalites on the road to Nilawaya village in Dantewada, Chhattisgarh, Sahu had recorded a conversation with a school teacher coming from the opposite direction.

"The teacher told him that the newly made road had made it possible to reach the school every day when earlier he could go only once a month," says Dr Abhishek Pallava, the superintendent of police, Dantewada, an MD from the All India Institute of Medical Sciences, New Delhi.

The three Doordarshan journalists were escorted by a small police team on motorcycles as they made their way to Nilawaya, six kilometres inside the jungles, where a polling station was going to be set up for the first time in an election.

Nilawaya falls in Dantewada, one of the worst Naxal affected areas in the state. Until now, the polling booth used to be located on the road outside the village.

"The administration wanted voting do be done in the village itself this time so that the fear of casting their vote is removed from the minds of the villagers, but a final decision is still not made," says Dr Pallava, a Bihar native who joined the Chhattisgarh cadre after graduating as an Indian Police Service officer in 2013.

Like previous elections, Naxals have again put posters warning the villagers not to vote.

The ambush took place as a police personnel removed one such poster from a tree trunk. Doordarshan journalist Dhiraj Kumar, a part of the team, who survived unhurt told the Press Trust of India that cameraman Sahu was shot while recording visuals on the road.

He fell to the ground and died almost instantly.

The other two journalists crawled to a ditch and were provided cover fire by another constable.

"When the Naxals started approaching the journalists, the constable crossed the road to stop the Naxals and was martyred," says Dr Pallava who rushed to the spot with a team of policemen to push back the Naxals.

While speaking to the media immediately after the tragedy, Dr Pallava was in tears.

In the run-up to the assembly election in Chhattisgarh, eight to 10 media teams had already visited villages down that road and the villagers had been telling them that the road had made it possible for ambulances and teachers to reach them. It had made it easier for the villagers to travel to the market, said the SP.

"This was weakening the basic construct of the Maoist ideology which wants people to break away from the government and propagates a false narrative that the Maoists are working to improve the life of the poor," says Dr Pallava.

"Activists Bela Bhatia and Soni Sori have written an article about how Maoists beat up 20, 25 villagers in Phulpad in September for not attending a meeting called by them," he adds.

"For the first time, Maoists abducted and killed a student from a Livelihood college in Sukma a few days ago." Livelihood Colleges provide employment training to young tribals in remote areas.

"Angered by this reportage, they have targeted and attacked the media for the first time in this manner."

When a village gets connected to development, it weakens the hold of the Naxals, he reasons. In the last two or three years, students who have passed Classes 10 and 12 want to come back as teachers, midwives or nurses and work in the village.

"Naxals feel if the link is broken with these villagers, their ideology will crumble and disintegrate. They sense their end is near," says Dr Pallava who administered medical treatment to a Naxal 'commander' after shooting and capturing him in a seven-hour anti-Naxal operation in 2017.

The timely treatment saved his life and the Naxal became a police informer. He went back to his village and has returned to farming. "I meet him when I go to the village or if he comes to the SP office," says Dr Pallava. Roads pose the biggest threat to the Naxals. Connectivity links remote parts to nearby towns, bringing government agencies to the villages.

"Three parallel roads are being constructed which is going to better lives. People can access the hospital, go on bikes, buy tractors -- this connects them to the modern world outside," says the SP.

The road work in Nilawaya started two months ago and will be completed in 15 or 20 days.

"The completion of the road was making them nervous because it was contrary to what they propagate that the police commit atrocities on tribals and the government does not bring development to the tribals," says Dr Pallava.

This was the second road attack in the run-up to the assembly election. An Improvised Explosive Device took the lives of four CRPF personnel on October 27 in Bijapur.

IEDs are difficult to detect. A large number of security personnel are deployed in securing roads.

The Dantewada district administration has called a meeting of all political representatives to apprise them about security. The extra sensitive villages in the interiors will be out of bounds for politicians and the media.

In the two years he has served in the area of conflict, Dr Pallava says villagers who did not come in contact have started connecting with the police.

"No abuse of human right cases have come up against us," says Dr Pallava, who carries antibiotics, multivitamins and other medicines whenever setting up camps in Bastar where the health care infrastructure is weak.

"Health care is the best way to win the hearts of villagers."

The doctor turned IPS officer says he left AIIMS because he did not want to be limited to a hospital and wanted to work for society at large.

His wife is also a doctor in the district hospital.

"Like terrorism ended in Punjab, Naxalism will end in Chhattisgarh," he says, "so that generations to come can live in peace."

"A large area is liberated. We are entering the jungle and the hearts and minds of the people."

"They day people break the connect with the Naxals, Naxalism will die." 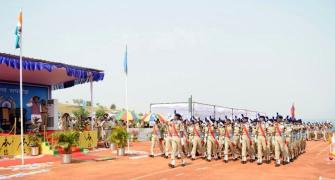 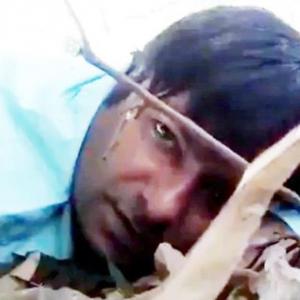 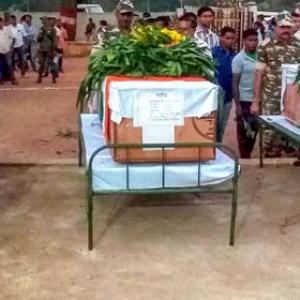