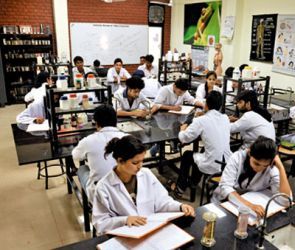 Nearly 300 teachers of a medical college on Monday submitted their resignation to Uttar Pradesh government, even as the agitation by doctors against arrest of 24 junior doctors entered the fourth day.

"300 doctors faculty have sent their resignation to Director, Medical Education K K Gupta and all teachers along with junior doctors are holding a peaceful agitation to protest against barbaric police action on 24 junior doctors and their subsequent arrest," said Aarti Lal Chandani, IMA Kanpur president and Head of Medicine Department of Ganesh Shankar Vidyarthi Medical College.

The agitating doctors have also written to the prime minister and the President apprising them about the "barbaric" action of the police and sought their intervention into the matter.

"All the doctors have resigned wilfully in protest against the police lathicharge on the junior doctors of the college and their arrest," Chandani said.

Kanpur police SP (West) Gaurav Singh said all 24 junior doctors, allegedly involved in stone pelting, were arrested on Sunday. He said police has been deployed around the medical college to avoid any untoward incident.

"We demand that guilty police officials be suspended immediately and the arrested doctors be released," Chandani said, adding, "till our demands are met, the strike at the medical college will continue and the services will remain suspend."

The IMA Kanpur chief claimed that nearly 2000 private doctors in the city are also not working in support of the strike and all nursing homes and private hospitals too were shut.

Medical services in Uttar Pradesh remained affected for the fourth day even as some patients have also reportedly died due to lack of timely medical assistance and the medical college administration is looking into the matter.

Meanwhile, Aam Admi Party leaders Kumar Vishwas and Sanjay Singh have also extended their support to the agitation saying the party is with the doctors on the issue.

Government hospitals Ursula and KPM Hospital are open and patients of the medical college are being transferred there for treatment.

Chandani accused supporters of SP MLA Solanki of registering fake FIRs against her and her husband and other doctors.

Meanwhile, senior government officials from Lucknow and Kanpur on Monday met striking doctors asking them to end the boycott but they were adamant on their demands.

At King George's Medical university, Lucknow agitating junior doctors locked the OPD to protest the alleged atrocities on their counterparts in Kanpur on February 28 and sat on a dharna at the university gate.

"The junior doctors are boycotting their duties to register their protest. We are holding a meeting later in the day to discuss the matter," KGMU Medical Superintendent, SN Shankhwar told PTI.

In Gorakhpur, private doctors on call of IMA local unit also joined the stir and closed down private nursing homes.

Services remain paralysed in the medical college, Gorkahpur following the protest of junior doctors, who are adamant on their demand.

"We have given a call for closure of private hospitals today to support the junior doctors. If the demands are not met we can resort to indefinite closure," IMA, Gorakhpur unit president BN Gupta had said.

Doctors in Allahabad and Varanasi were also reported to be protesting against the police action.

The strike at Ganesh Shankar Vidyarthi Medical College Hospital here, called by the Indian Medical Association, was called to protest the police action following a clash between the junior doctors and an SP MLA and his supporters, crippling services in various wards at the associated Hallett Hospital.

The stir was joined by private doctors.

A clash broke out on Friday night between supporters of SP MLA Irfan Solanki and junior doctors of the college.

The clash occurred when the Aryanagar MLA objected to some junior doctors of the college allegedly misbehaving with an elderly person at the Medical College Square, SSP Yashasvi Yadav had said.

Following unruly scenes, the police later resorted to lathicharge to disperse the crowd. The incident left several people, including police personnel, journalists and many civilians injured, sources had said.

The MLA was also injured in the clash, Yadav had said.

Thirty-six junior doctors were arrested after the incident. Twelve of them were later released.

Almost 400 medical students and junior doctors got injured and a dozen are serious, Chandani had said.

Image: Image for representation purpose only