As many as 10 central trade union on Monday announced their support to the nation-wide protest on September 25 by peasants and farm workers to oppose passage of two agri bills in Parliament, saying the Bharatiya Janata Party government should stop anti-farmers measures. The joint platform of central trade unions and sectoral federations declares its unstinted support to the initiative of Joint Platform of Peasants and Agricultural Workers Organisations -- the All India Kisan Sangharsh Coordination Committee to hold countrywide protest and resistance on 25th September 2020, the central trade unions said in a joint statement.

"We also join them in protesting against the disastrous Electricity Amendment Bill 2020," the statement said.

Two key farm bills, dubbed as the biggest reform in agriculture by the government, were on Sunday passed by Rajya Sabha with voice vote.

The Farmer's Produce Trade and Commerce (Promotion and Facilitation) Bill, 2020, and the Farmers (Empowerment and Protection) Agreement of Price Assurance and Farm Services Bill, 2020 have already been passed by Lok Sabha and will now go to the President for his assent before they are notified as laws.

Prime Minister Narendra Modi has termed it as a "watershed moment" in the history of Indian agriculture, asserting that the bills will ensure a complete transformation of the farm sector and add impetus to the efforts to double the income of farmers.

The Congress and other opposition parties have slammed the bills as "death warrants" of farmers.

Central trade unions and sectoral federations have called upon workers and their unions of all affiliations and across the sectors to join actively in the programmes of protest and resistance being organised by peasants' organisations in and around their respective areas, the statement said.

The trade unions alleged that the proposed laws are aimed at completely restructuring the management of the agricultural economy including farm trade in total favour of the big-landlord corporate nexus and multinational trading cliques on agricultural produce.

"They virtually kill the rights and entitlements of the agricultural population. The Essential Commodities Act and related anti-hoarding, anti-black-marketing regulations are going to be curbed," it sad.

They are of the view that the virtual withdrawal of government's role in ensuring fair and remunerative prices for farmers' produce will pave the way for ultimate doing away with government procurement of agricultural produce with minimum support price.

In totality, peasant agriculture will be totally ruined, on which survival of more than 60 per cent population is dependent, the statement said.

The joint countrywide action on September 25 which may turn into total Bandh in Punjab and Haryana and series of blockades in every corner of the country, is therefore a necessary action to protect farmers, food security and the country's economy, the unions stated. 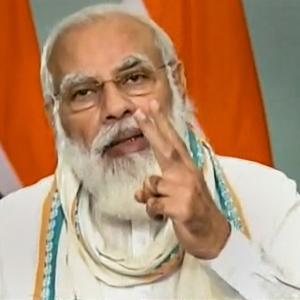