News
Business
Movies
Sports
Cricket
Get Ahead
Money Tips
Shopping
Sign in  |  Create a Rediffmail account
Rediff.com  » News » Why this student is protesting the citizenship law

'I came for my national service. I am the son of people like Gandhiji, Nehru, Patel, Dr Ambedkar and Maulana Azad.' 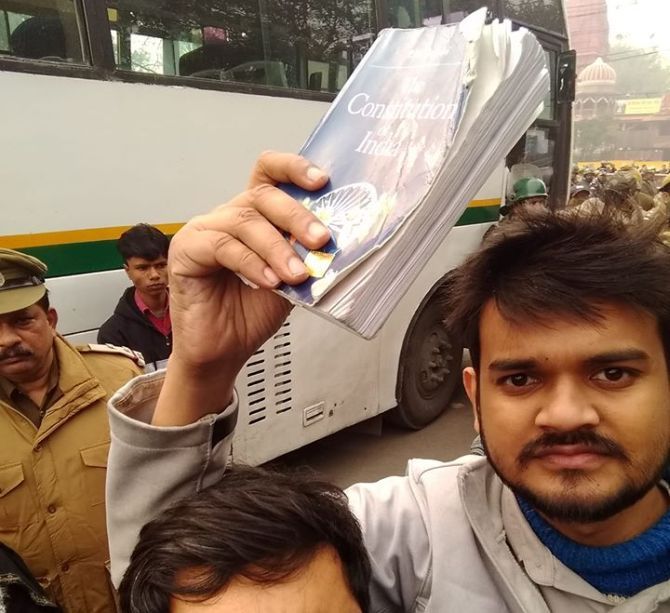 IMAGE: Delhi University student Aditya Krishna is protesting against the Citizenship (Amendment) Act. On Thursday, December 19, along with many others, he was detained for defying police orders and meeting at the Red Fort in Delhi.

Defying police orders and Section 144 of the Criminal Procedure Code (which bans the assembly of people), hundreds of people gathered at the Red Fort area in Delhi on Thursday to protest against the Citizenship (Amendment) Act.

The police quickly detained the protesters and whisked them away from the area. One of the detained is Aditya Krishna, a student at Delhi University.

"The CAA is a step closer to realising a Hindu Rashtra. Citizenship defines what kind of country it is. This model is exactly a way forward to establishing a Hindu Rashtra," Aditya tells Syed Firdaus Ashraf/Rediff.com.

Why are you protesting?

The Citizenship (Amendment) Act is unconstitutional. It violates Article 14 of the Constitution.

It is against the freedom struggle for which freedom fighters like Mahatma Gandhi, Jawaharlal Nehru, Dr Ambedkar, Sardar Patel and Maulana Azad fought for.

This legislation violates our freedom struggle and values enshrined in our Constitution. That is why I am protesting.

Why have you come out on the roads now? The bill was passed almost a week ago.

I have been on the streets since the bill was passed. I have been constantly protesting.

The police issued an advisory asking people not to come out to protest.

When Mahatma Gandhi came to Champaran, the police said the same thing to Gandhiji, you will be detained.

Gandhiji said, 'You are doing your duty and I am doing my national service.'

So I came for my national service. I am the son of people like Gandhiji, Nehru, Patel, Dr Ambedkar and Maulana Azad. Right now, we are more than 30 people in a bus who are being taken to the Bawana police station. We are all detained.

Are you associated with any organisation?

I am just an Indian citizen with no political affiliation. I am doing my master's from Delhi University.

The Bharatiya Janata Party states that the citizenship law is not against Indian Muslims. So, what is your reason to protest?

India is not a Hindu Rashtra, but a secular democracy.

Our freedom fighters like Bhagat Singh, Chandra Shekhar Azad or even Congress leaders, none of them fought for a Hindu Rashtra.

Sardar Patel called the idea of a Hindu Rashtra mad.

Dr Ambedkar said if a Hindu Rashtra came into existence it will be a great menace to the country.

Jawaharlal Nehru said as long as I am at the helm of affairs I will not allow this country to become a Hindu Rashtra.

Even Bhagat Singh and Subhas Chandra Bose were against communalism.

You think the Citizenship (Amendment) Act can make this country a Hindu Rashtra?

The CAA is a step closer to realising a Hindu Rashtra.

Citizenship defines what kind of country it is. This model is exactly a way forward to establishing a Hindu Rashtra. 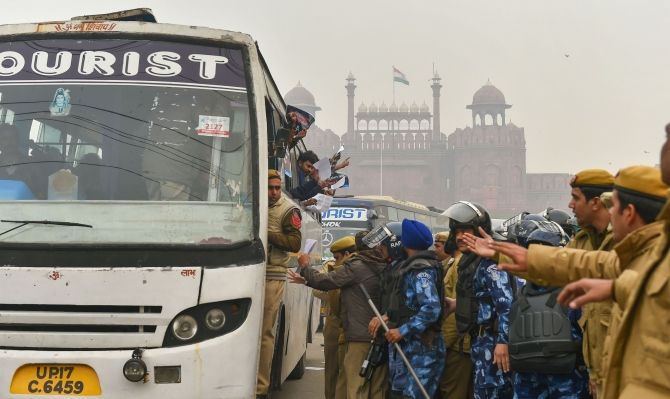 Home Minister Amit Shah has said the government will not withdraw the Citizenship (Amendment) Act, so what is the point in protesting?

The Supreme Court of India is the only hope. The people of India are also the hope.

We will do civil disobedience against the Citizenship (Amendment) Act.

The BJP mentioned the CAA in its manifesto. The BJP won more than 300 Lok Sabha seats. So what is there to oppose?

The Kesavananda Bharati judgment of 1973 says you cannot change the basic structure of the Constitution. This bill violates it.

Even if they get 540 seats in the Lok Sabha and 240 seats in Rajya Sabha some things don't change. And this is one of those.

Secularism is the cornerstone of Indian democracy and it cannot be changed.

Where will persecuted Hindus go, if not India?

We are not against the bill, but why are persecuted Muslims not included?

We are not against the bill if they had included all the religions including atheists. I would have been the first person to say I salute Amit Shah and Prime Minister Modi for this.

The CAA is discriminatory, therefore we are opposing it.

Syed Firdaus Ashraf covers national affairs for Rediff.com.
He can be reached at firdausa@rediff.co.in