Elections are due in Tamil Nadu and West Bengal that year.
Early indications show Bengal holds promise for the BJP, but the party may have to recast itself to win Tamil Nadu, points out Aditi Phadnis. Tamil Nadu appears to be fast becoming an independent republic.

It defied national sentiment during the 2019 Lok Sabha election to vote for the opposition Dravida Munnetra Kazhagam-Congress alliance.

The Congress may be wringing its hands about the loss of its leaders and might be ambivalent about its stand of Article 370, but DMK MP Tiruchi Siva's speech on August 5 was a stellar call for democracy and humaneness in Kashmir.

Speaking against the motion, he said: 'Sir, we have to re-assure in this situation that no force on the earth can take away the special status provided to Kashmir... Even Shri Atal Bihari Vajpayee initiated to hold talks with Kashmir. It is not only within the framework of the Constitution, it should also be within the framework of humanity... Kindly don't resort to force... We have to win the hearts and the minds of the people in Kashmir...'

His intervention revolved around an appeal to consult with stakeholders.

Last month, at a time when Prime Minister Narendra Damodardas Modi is at the height of his popularity, #modigoback hashtag started trending on Twitter during his Mahabalipuram meeting with Chinese President Xi Jinping.

Modi's gesture of appearing in a veshti apparently failed to melt Tamil hearts!

In the rest of India, the Bharatiya Janata Party seems invincible.

But in Tamil Nadu, it is seeking props.

It has a willing partner in the ruling All India Anna Dravida Munnetra Kazhagam which was also its ally in 2019.

However, new political challenges could appear in the coming months and the BJP might face a struggle in putting down roots in the state.

In October, Jayalalithaa aide Sasikala completed two thirds of her four-year prison term in the Parappana Agrahara prison near Bengaluru where she is lodged for corruption charges.

According to Karnataka parole and furlough rules, a prisoner who has demonstrated good conduct is eligible for early release after completing two thirds of the tenure depending on the judgment of the statutory advisory board.

So she could be out of jail sooner than expected.

An early release will give her time to reorganise the Amma Makkal Munnetra Kazhagam currently led by her nephew T T V Dhinakaran.

The AMMK and the rump of the Jayalalithaa's party, the AIADMK (which is currently in power in Tamil Nadu), are pitted against each other in a fight for survival.

At stake is a significant vote bank: The legacy of Jayalalithaa.

In the Lok Sabha election, Dhinakaran's AMMK was able to win only about 5% of the votes and not a single seat.

But a lot has happened since then.

The party has a new symbol, many have walked out and it opted not to contest the Vikravandi and Nanguneri assembly by-elections in a bid to conserve its energies. (AIADMK candidates wrested both seats from DMK and Congress when the results were declared on October 24.)

Elections for the Tamil Nadu assembly are still some distance away.

But it is clear that Sasikala's early release will have an unpredictable impact on politics in the state.

Will she be able to bring about a realignment of forces loyal to Jayalalithaa, thereby preventing a division of votes between the AIADMK and the AMMK?

Or is the field free for the DMK (and its ally, the Congress)?

Can the BJP spread its wings in Tamil Nadu however unlikely that proposition might appear at present?

At this point there are no clear answers.

2021 promises to be the year of the Great Test for the BJP, with elections due in Tamil Nadu and West Bengal.

But it may have to recast itself significantly to win over the people of Tamil Nadu. 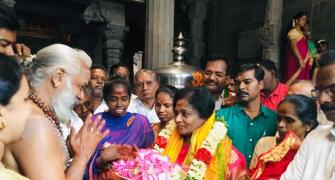 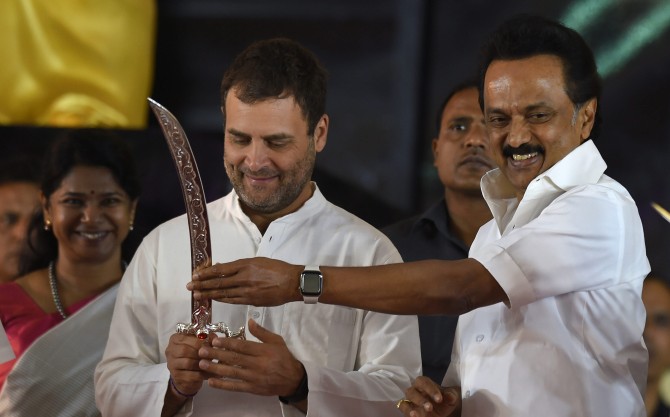