'Modiji's programmes are efficient and with foresight, and needed for the country.'
'I also like his way of functioning. So, in whatever way I can, I would like to contribute.' When G Madhavan Nair, former chairman, Indian Space Research Organisation, joined the Bharatiya Janata Party, the question many asked was: What is a scientist doing in a political party?

"I worked with him when he was chief minister of Gujarat. He made use of technology in a very effective manner to reach out to villages. Then itself I noticed that his style of functioning was quite unique," Nair tells Rediff.com's Shobha Warrier.

Why did you decide to join the BJP?

I have been working for various programmes of (Prime Minister Narendra Damodardas) Modiji for quite some time. It is only a formal induction that has taken place now.

I feel Modiji's programmes are efficient and with foresight, and needed for the country. I also like his way of functioning. So, in whatever way I can, I would like to contribute.

Are you talking about the programmes he launched after he became prime minister?

I worked with him when he was chief minister of Gujarat also, in fields like village resource centres, tele-education, tele-medicine etc. That was in early 2000. He made use of technology in a very effective manner to reach out to villages.

Then itself I noticed that his style of functioning was quite unique. He was against corruption and wanted to eliminate it from the system, and he succeeded in it at the state level. Now at the national level also, he has achieved the results to a great extent.

That might be true, but the impression is that people expected a lot from Mr Modi and they are disappointed, especially because not many jobs were created. What is your assessment of the four years of the Modi government?

If you are talking about employment in government offices or creating more factories, there is definitely not much growth. But he has adopted a philosophy that the whole economy grows and the growth of the economy is made use of by creating self-employment.

If you take every state, you will see that lakhs of people are being employed on their own.

According to me, the Ayushman Bharat Mission is a pathbreaking idea that was for the health of the entire country. Also, the programme to provides house to everyone.

Most of these programmes have to be done through state authorities and some states do not take up these initiatives only because they were initiated by Modiji.

Kerala is the typical example. Practically no programme announced by the prime minister is taken up by the state. If at all, they take up any, they give it a different colour and different name to make it look like their idea, and they do it half-heartedly.

Now that you have joined the BJP, in what way are you planning to contribute to the party?

I would like to stress on the development agenda in Kerala so that we can send at least a few people to Parliament. 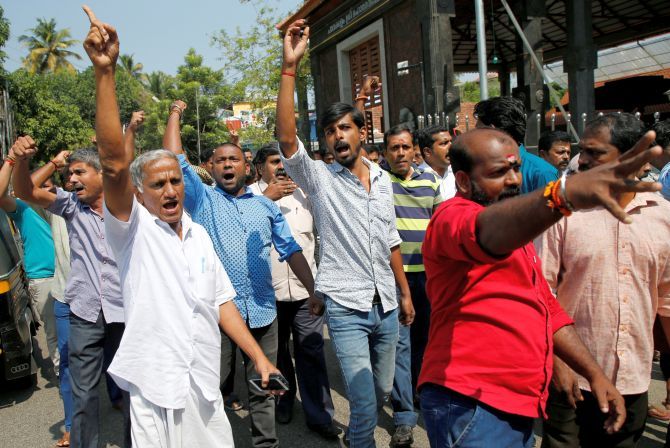 One issue that rocked Kerala is the Sabarimala issue. Are you happy with the way the BJP responded to it?

I don't even look at it as an issue because there is no question of women being treated differently in Sabarimala as has been propagated by some.

Women have been going to Sabarimala for ages and the restriction is only to those between the ages of 10 and 50. That is because of the religious custom followed in that particular temple and this kind of a restriction is not there in any other Ayyappa temple.

What is happening in Sabarimala is government-sponsored terrorism.

The Pinarayi (Vijayan) government has sponsored the whole thing to trigger the masses and what is happening on the streets is the reaction of the masses.

It is not something started by the BJP. When the government has hurt the sentiments of a certain section of the people, they will definitely react.

I feel the BJP would have provided leadership in the Sabarimala issue but they didn't take a view like that. They said we are with the devotees and their interests will be safeguarded.

They didn't take a firm stand on the issue and defied the court order. They have left it to the court.

According to me, neither the court nor the government has anything to do with religious customs and faith. It should be left to the people.

In Kerala, there are thousands of temples for the Hindus and an equal number of churches and mosques. Every religion has its own customs and beliefs which have been followed for ages. And it should be left to the people who worship to decide how they want to do it.

The BJP's central leadership also did not take a strong stand on the issue. Do you feel the BJP not taking a strong stand will adversely affect the party in Kerala?

No, I don't think that will be a factor here. The factor will be the terrorism sponsored by the government versus the peaceful beliefs of the people. In general, people want a peaceful state, a corruption-free state.

What kind of impact will the kind of violence seen on the streets have on the political scenario?

The violence will not continue forever. The reaction of the people was spontaneous in response to the cowardly acts committed by the government and their agencies. Everything will die out once the temple closes.

Do you feel people will forget the issue altogether?

People will never forget what the LDF (Left Democratic Front) government has done.

Have you ever heard of a state government sponsoring terrorism in the state and creating a wall spending tens of crores of rupees and asking people to leave the office early to be a part of the wall? This has never happened in the history of any country.

I am sure the people will pay back for these acts. These people do not believe in God and worshipping.

The agenda they have is to destroy any institution that propagates worshipping. That is the ulterior motive behind all this.