News
Business
Movies
Sports
Cricket
Get Ahead
Money Tips
Shopping
Sign in  |  Create a Rediffmail account
Rediff.com  » News » 'UP is what Modi wants India to be'

'This government puts poor people behind bars, demonises women after their death, puts out the call records of deceased raped victims and robs her of her dignity.' 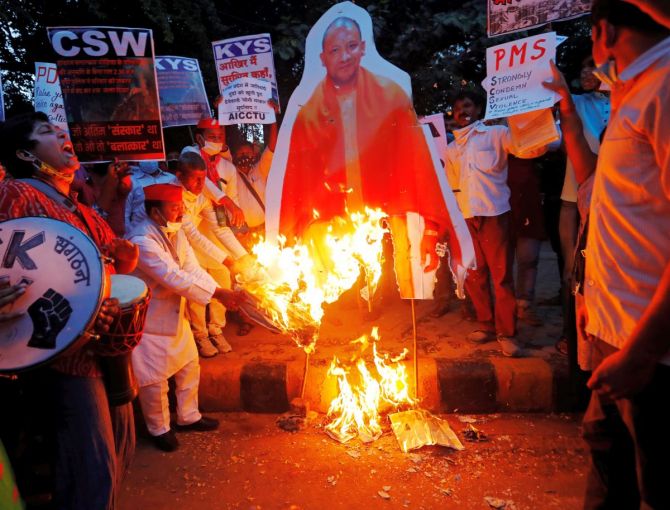 When the Gandhi siblings -- Rahul and Priyanka -- met the family of the Hathras victim, political pundits and the public applauded them.

At the same time, political pundits asked: Where is Akhilesh Singh Yadav? Why hasn't the Samajwadi Party taken centrestage in the protests over the Hathras horror?'

Ghanshyam Tiwari, national spokesperson, Samajwadi Party, in an interview to Syed Firdaus Ashraf/Rediff.com, claims that on the ground it has been the SP fighting against the injustices of the Bisht government and goes on to say, "Yogi is a dictator. He is petty and he is weak. He misuses the law."

When it comes to Hathras, it appears as if only the Congress is opposing the Bharatiya Janata Party. The Samajwadi Party, which is the main Opposition party in the state, seems to be missing in action.

The battle in Hathras is against injustice and the fight against the crime was led by the deceased girl and her family. The girl fought against all odds for her life without any support from the government for two weeks and lost her life. The family stood with the truth exposed by the girl.

Independent media then picked up the story and it is here after which political parties and civil society raised the issue so that the plight of the girl and her family is not diluted.

Other parties have protested in their own ways. We do not see such injustices, which are a daily story in UP, as a road to competitive politics. We see this as a way to continuously expose the unjust dictatorial policies of Yogi Adityanath and the BJP. We welcome any party to protest in their own way.

It looks like Priyanka Gandhi and Rahul Gandhi were the only ones who were opposing the Yogi government while the SP somewhere seems to be left out.

I believe that if one is observing the situation from afar, then you are only seeing the leaders who were in Hathras, but if you analyse the situation from ground zero you will realise that we are the ones who are standing formidably with the girl's family. And not just in this particular case.

Our party's delegation went to Balrampur, Benares, Kanpur Dehat and the entire state. Hathras is the epitome of injustice and indignity.

The BJP has decided to stand with the rapists and defame the girl further. And even threaten the girl's family. That aside, in every other case, the Samajwadi Party has stood by victims and have demanded compensation for the families.

Your leader, the former chief minister of Uttar Pradesh, Akhilesh Yadav, is missing in action. Is it causing trouble as he is not in India now?

He was in Parliament and voted against the unjust passing of farm bills. In the intermediate he was not there and I don't think one incident defines people's choice as to who is the principal Opposition party in Uttar Pradesh.

Is the BJP too strong a foe in Uttar Pradesh?

Yogi Adityanath is like Kim Jong Un of Uttar Pradesh. When a dictator thinks he is at his peak, he has no idea how popular or unpopular he is. He is so scared that he burnt the body of the girl (in the early hours of September 29-30). And now, he is saying the girl was not raped.

He is leaking call records of the dead girl to the media. Earlier, he filed an FIR against retired bureaucrats (during the protest against the Citizenship Amendment Act).

He is a dictator. He is petty and he is weak. He misuses the law with force to do injustice.

Has the kind of laws he has introduced in UP made it difficult to be in the Opposition?

UP is the perfect picture of what Modi and Amit Shah want India to be.

Protesters will be bullied, shamed and put behind bars in fake cases.

Nearly 50 per cent of cases filed under the National Security Act as quoted by the media were related to cow slaughter.

The first thing the Yogi government did after the girl died in Hathras was to burn her body and then they defamed the family and leaked her call records to the media.

And why does the BJP want such tyrannical figures to rule? The answer is because this is their vision for India.

Your party's rule was dubbed as 'goonda raj' and therefore the people of UP elected the BJP. And they feel that Yogi is taking on goondas of UP which is good.

When a large section of the media ran a fake campaign against Rhea Chakraborty for three months and in those three months nearly three thousand farmers committed suicide, the media did not write a word.

India's coronavirus cases went up, they did not write a word (against the government's handling of the pandemic crisis).

Around 7,000 rapes more than and 6,500 murders took place and no word was written against the government. This is the media that is building a narrative.

And such a media built up a narrative against the Samajwadi Party leader who as chief minister always presented himself before the media humbly. He met them and accepted the criticism of his regime. And to this day, his work is recognised. And such a government was called goonda raj.

This government puts poor people behind bars, demonises women after their death, puts out the call records of deceased raped victims and robs her of her dignity.

It is harsh to compare Yogi to Kim Jong Un. You are criticising him freely and yet no one will arrest you. You know this wouldn't happen in North Korea.

Give me an example which proves where you find Modi or Yogi having a democratic temper.

No government has the capacity to put lakhs of people in jail, but when they have the capacity, they will do it after which no Opposition voice will be left. There are hundreds of people who are in jail for criticising their government.

Look at UP, the journalist travelling to Hathras was arrested under the terror law.

Look at the case of Umar Khalid or the Delhi riots case.

The Yogi government can arrest you and me under the terror law without any proof, irrespective which part of the world we are.

Umar Khalid's lawyer told the court he was not in Delhi when the riots happened. And all they do is to blame Nehru.

If Nehru was not cremated but buried, they would have even exhumed his body to prove their point. 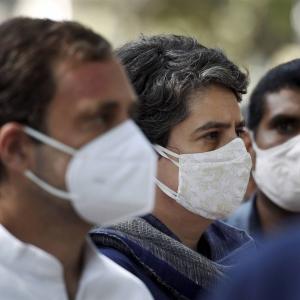