IMAGE: Cops stand guard behind a roadblock along a deserted street in Srinagar during restrictions. Photograph: Mukesh Gupta / Reuters

In an interview to Rediff.com's Prasanna D Zore on the implications of scrapping Article 370, he says the dust will soon settle down in the Kashmir valley.

"Sooner the people realise that today is no different from yesterday things would just settle down," he says.

Writing for the ORF, you said the scrapping of Article 370 is a stroke of legal genius (external link). Why do you think so?

Everybody was of the view that the only way to undo Article 370 is by doing it the way listed in Article 370, which is by seeking permission or concurrence from Jammu and Kashmir assembly or the Constituent Assembly and also requiring a two-thirds majority for making a constitutional amendment.

I thought it would be extremely difficult for any government to do it. But clearly, what the BJP-led NDA government has come up with is that one of the clauses within (Article) 370 provides for altering whatever is contained, or whatever falls within the purview of Article 370, with a Presidential Order. Which is what they have done.

They have simply passed an amendment which says that the Constituent Assembly will be replaced with the government of the state (Jammu and Kashmir) and the government currently is the governor.

From this viewpoint one does not have to go through the rigmarole of going through a constitutional amendment. Using this, the present government has managed to undo Article 370 which has been hanging on for so long in quick time.

Can't one turn this legal genius argument around and call it unethical and Machiavellian?

Like, how can a government not follow the constitutional norm of scrapping Article 370 by not getting the permission of the state assembly which under the governor's rule does not exist currently?

If one wants to go through this ethical step then I could raise a whole lot of what-aboutery.

Like, was abolishing privy purses an ethical thing to do? You had given a solemn commitment on the basis of which a lot of states acceded (to the Indian Union). One could go on and on about this ethics argument.

When you are talking about realpolitik then you can't say that this is stretching the bounds of the Constitution and legality to the extreme. An argument can be certainly made on that account.

How ethical was it to have a system where the entire state of Jammu and Kashmir was being ruled only by a privileged few? Was that an ethical way of governing a state?

What in your view were the provisions of Article 370 that prevented the people and the state of Jammu and Kashmir from integrating with rest of India?

If Article 370 prevented the integration of Jammu and Kashmir into India, then how does it differ from many other constitutional provisions that confer special rights to people of, say, Himachal Pradesh, Mizoram or Nagaland?

But there is a difference between land being given on the basis of citizenship of a state, which is a state subject, and general restrictions on outsiders buying land.

A lot of people bought land in Himachal Pradesh on the basis of that particular provision. There is no blanket ban on purchase of land (in these states).

While I did say that, I also offered a counter argument that it remains to be seen how the 'known unknowns' unfold in the days to come.

There are possibilities that 'this', 'that' or 'something' could happen but these are the things you (the government) can still prepare for.

How will politics, for example, play out?

Will Kashmiris realise that this was a good thing to happen to them and the state? All this fear-mongering that is happening that people (outsiders) will swarm in and change the cultural landscape of Kashmir is an unfounded fear. Why would anybody want to settle out there and what will these migrants do out there?

It is entirely possible that everything falls into place and settles down without much ado. The home minister (Amit Shah) has made it clear that security will be needed till the militancy lasts and the central government needs certain controls on the law and order machinery.

Whether everybody agrees with that or not is a different matter but that's the rationale the government has given.

And he (the home minister) has clarified that as and when situation normalises, full statehood is quite likely. So, we don't know how that will play out. These are the complete unknowns.

The point is that the decision has been made and it is a done deal now and I don't know how this will be overturned. I don't know how the courts are going to intervene in this matter. Indian judiciary is quite conservative on any decision that is going to shake up things very badly.

What happens as we go along is a very big question mark. One can only hope that the dust will settle down and the situation will normalise.

How will the scrapping help the resettlement and reintegration of Kashmiri Pandits in the valley?

I am sceptical about that. That may not happen but the bottom-line is that those who have settled in Bombay, Bangalore, Delhi or Pune have their lives, their businesses, their jobs and their families will not go back. But there is this emotional attachment that connects and this is more important.

This is why I say that there is lot of fear-mongering that lots of people (from outside the state of Jammu and Kashmir) will go there, purchase land and settle there is leading to xenophobic ideas that the identities of Kashmiris will be drowned by the outsiders makes no sense.

The point I am making is, does a Kannadiga when he moves to Delhi loses his identity or changes the identity of the people around him? Regional identities have strong roots and to think that allowing people from other parts of India settle down in Kashmir will dilute their identity is nonsensical.

I am a Punjabi settled in Delhi but that has not diluted my identity; I am as much Punjabi as I am an Indian. This is a country that actually celebrates diversity. We relish each other's food; we relish each other's custom and this is not just across regions or languages but also across religions.

This is a country where homogeneity has no place. It doesn't work here.

How will the valley react once the curfew is lifted and once communications lines are opened?

Your guess is as good as mine. I will not be surprised if there is some kind of disturbance or protests from the people there. The question is, will it get totally out of control and how long these protests will last. Or, perhaps things will settle down after people vent out their anger.

But sooner the people (in the valley) realise that today is no different from yesterday things would just settle down.

But nobody knows how that is going to play out.

You had earlier tweeted that the trifurcation of Jammu and Kashmir will be an unmitigated disaster. How do you look at the bifurcation of the state now?

Why would you think that trifurcation of Jammu and Kashmir into three entities — Jammu, Kashmir and Ladakh — would be an unmitigated disaster?

I think the region of Ladakh may not have a legislative body but there will be a representative  body. It could be a council for Ladakh.

The kind of communal passions the trifurcation would have ignited would lead to unmitigated disaster and we could have well said that the Muslim valley can go back to Pakistan. 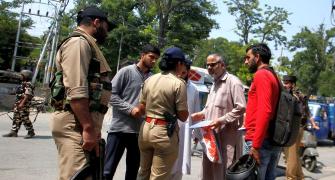