News
Business
Movies
Sports
Cricket
Get Ahead
Money Tips
Shopping
Sign in  |  Create a Rediffmail account
Rediff.com  » News » 'Connecting the boys to a plot to kill the PM is utter nonsense'

'It is a concocted letter and we suspect the IB (Intelligence Bureau) to be behind this game.'
'All the investigation agencies should have quietly gone about finding more about this alleged plot to kill the prime minister.'
'Why are you leaking such a letter that reveals the plot to the press as well as to BJP spokespersons?' 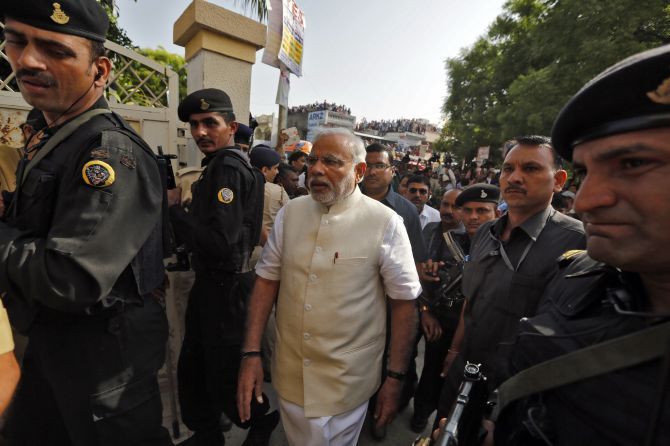 Justice B G Kolse Patil, a retired judge of the Bombay high court, is co-founder of the Elgar Parishad that organised the December 31, 2017 event to commemorate 200 years of the Bhima-Koregaon battle in Pune.

Justice Kolse Patil believes the Devendra Fadnavis government in Maharashtra and the Narendra D Modi government at the Centre are trying to frame the founders of the Elgar Parishad through the arrests of five activists on charges of being Maoists and hatching a controversy to assassinate the prime minister in a 'Rajiv Gandhi-type operation'.

"Their main target was (Sudhir) Dhawale. Since they could not directly get at him, they played this charade of arresting the others and linked all of them as being Maoists and planning to kill Prime Minister Modi only to build a case against Dhawale," Justice Kolse Patil tells Rediff.com's Prasanna D Zore.

"How can these innocent people plan to kill the prime minister?" he asks.

Justice Kolse Patil alleges that the government is targeting him and retired Supreme Court Justice P B Sawant because they have been at the forefront of a movement that dissuades Dalits, Muslims and Adivasis from supporting Modi in the next general election.

Why do you think the Maharashtra government arrested Sudhir Dhawale, Mahesh Raut, Rona Wilson, Shoma Sen, Surendra Gadling on charges that they are Maoists and were planning to assassinate the PM?

Justice (retired) P B Sawant (of the Supreme Court) and I have been working against the Modi government from day one.

We had also taken one Elgar Parishad in October 2015 at Shaniwarwada and announced that we want an RSS-mukt (free) Bharat.

Justice Sawant and Justice (V R) Krishna Iyer did inquire about (the 2002) Gujarat riots and they had recommended Modi's prosecution for genocide.

Our enmity is about 15 years old.

Thereafter, the Elgar Parishad travelled throughout India, asking people, especially Dalits, Muslims and Adivasis, to pledge that they will never again vote for Modi or the BJP (Bharatiya Janata Party).

We have been telling them that this government is not for you. It is only meant to serve the capitalist lobby.

In short, we are fighting moneywaad (crony capitalism) and manuwaad (casteism) forces.

Therefore, these innocent people were arrested.

In fact, only Dhawale was at the (Elgar) Parishad (organised at Pune's Shaniwarwada fort on December 31, 2017 to commemorate 200 years of the Bhima-Koregaon battle; following the Elgar Parishad, incidents of rioting were reported from different parts of Pune) and the rest (the other four who are arrested) have got nothing to do with it (the Elgar Parishad).

Why did the government arrest the other four?

They wanted to arrest Dhawale who was helped in his acquittal by Gadling (Advocate Surendra Gadling had fought Dhawale's case after his arrest in 2011 on charges of being a Maoist; Dhawale spent 40 months in prison before his release).

He was not only acquitted (of all the charges), but the court also passed strictures against the government.

Their main target was Dhawale.

Since they could not directly get at him, they played this charade of arresting the others and charged all of them with being Maoists and hatching a plan to kill the PM only to build a case against Dhawale.

How can these innocent people plan to kill the prime minister?

Gadling, for that matter, has fought for the rights of the poor throughout his life.

Now, through Dhawale, they want to defame Justice Sawant, me and the Elgar Parishad because we have been working against the Modi government.

Justice Sawant has made many statements against manuwaad, moneywaad, Brahminical forces through his writings and public meetings.

Their problem was how to defame Justice Sawant and so they have built this case against Dhawale through whom they want to suppress the voice of the Elgar Parishad.

They claim that Dhawale took money from the Maoists to fund the Elgar Parishad.

MIT-WPU (MIT-World Peace University) had a function on the morning of January 1, 2018, where they felicitated renowned scientist Dr R A Mashelkar.

We had our programme at night on December 31. They (MIT-WPU) told us that since they won't have enough time to decorate the ground after our function, they would decorate it on the morning of December 31, which we could use for our programme too that night, and the same would be used by them the next morning.

Accordingly, they (MIT-WPU) paid all the expenses for our meeting for their convenience.

When we take any public meeting we make use of only a few trucks and address the people from there.

Why is the state government trying to implicate the Elgar Parishad as you allege?

They are afraid of us.

Not just us, but can you imagine that after the Justice Sawant and Justice Krishna Iyer report (on Narendra D Modi), the whole world refused a visa to Modi.

Even today those reports are world famous and circulated throughout the world.

Whatever trouble Modi had in the beginning it was only because of us, our team.

They want to get back at us, but they can't because we have done nothing wrong or against Indian law.

The state government is trying to intimidate and suppress us by such arrests, but they may still arrest us using any ruse.

Have you gone through Rana Ayyub's book on Gujarat (The Gujarat Files)?

They (Narendra D Modi's then government in Gujarat) used to make use of the law and order machinery to arrest people on false charges. They did whatever they wanted.

So far they have not touched us, but they may do it (arrest Justice B G Kolse Patil and Justice P B Sawant on false charges). They are looking for ways to get us into this (Maoists link).

Connecting the boys to a plot to kill the prime minister is utter nonsense.

What are the gaps that you find in these arrests? How will the case against these five proceed in the days to come?

That letter produced (by Public Prosecutor Ujjwala Pawar) involves Prakash Ambedkar, the BJP and whoever their opponents are, all at once.

Are these Naxalites fools to write such letters?

It is a concocted letter and we suspect the IB (Intelligence Bureau) to be behind this game.

This is a plot, whose only purpose is to defame us.

Justice Sawant has asked for a thorough probe into the matter. Will the State entertain such a demand?

I don't believe any investigation agency can be trusted to conduct a free and fair probe in this country today.

All institutions, including the bureaucracy, the IB etc, are dominated by the (people belonging to or affiliated to the) RSS.

If you look at the 2014 (Lok Sabha) election, all heads of the various government departments and autonomous institutions like the accountant general (the comptroller and auditor general), the army chief, the head of the IB and police, all fought the election as BJP candidates or were given sinecures.

The question is: What were these gentlemen doing throughout their lives?

We have always maintained that the RSS ideology has penetrated each and every institution and political parties like the Congress and the BJP.

So, I don't trust this government to conduct any free or impartial inquiry.

Let them do anything that they want. We are prepared for the worst.

What legal help is the Elgar Parishad offering the five people arrested?

On Tuesday (June 12), we held a press conference in Mumbai and legal luminaries like Indira Jaising, Mihir Desai were there to help them.

The Nagpur Bar Association has passed a resolution and petitioned this government (about these arrests).

The question is: Will the government listen to any of our pleas?

I don't think so because we have been creating awareness among the Dalits, Muslims and Adivasis how this government is working against them and they will never help them.

The Act (the Unlawful Activities Prevention Act) under which they (the five people accused of being Maoists and charged with a conspiracy to assassinate Modi) are arrested doesn't permit bail.

They can keep anybody, for anytime, in jail using such draconian laws.

How will the case against these five people proceed in the days to come?

They are now in police custody and when that gets over, they will be again produced in court.

Is there any hope for these five people arrested on the charge of being Maoists?

Yes, there is always hope. The courts are still there.

The government will use all means to see that they remain in jail, but we have the courts.

Does the letter produced by the public prosecutor have any evidentiary value in a court of law?

The letter has no value at all. Zero.

Under the Evidence Act for this letter to be taken on record they (the investigators) will have to show (produce) the sender and receiver as well as all other people connected to this letter. Otherwise, it doesn't satisfy the legal test.

Also, why are you leaking such a letter that reveals the plot of killing our country's prime minister to the press as well as to BJP spokespersons?

Actually, this letter should have been kept a secret.

All the investigation agencies should have quietly gone about finding more about this alleged plot to kill the prime minister.

If you are producing such a piece of evidence not only in the court but also to your own party spokespersons and the media, then what exactly is your strategy?

This is being done with the only purpose of defaming and discrediting us. Nothing is going to come out of it.

The Evidence Act will come into play only when the trial begins.

Then there will be cross examination of this letter, but prima facie this letter will not be taken on record unless they find the sender and all other people associated with this letter.

How long before the trial starts?

75 per cent of undertrials in Indian jails are Dalits, Muslims and Adivasis.

Even if the punishment for their alleged crimes, once proved, is for one year after conviction, they spend almost 12 years inside jail as undertrials.

I can understand criminals who are convicted facing punishment in jail for such long periods, but in India, Dalit, Muslim and Adivasi undertrials face long periods of incarceration.

Keeping undertrials in jail for such a long period is in itself an offence, but no court in India takes cognisance of this issue.