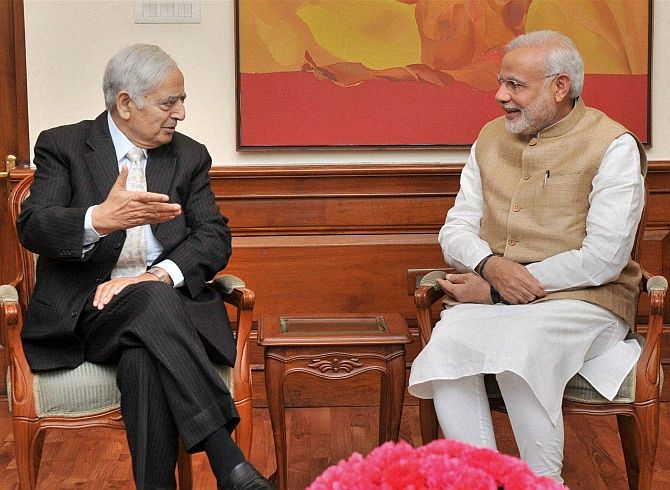 'I could have never imagined any other prime minister giving time to a separatist leader.'

'I think the Hurriyat should not be ignored. I think like Pakistan, they are being unnecessarily ignored.'

Politics in Jammu and Kashmir is set to change like never before. It will reach the tipping point soon when the issue of granting citizenship to war-time refugees and of inviting back Kashmiri Pandits, sons of the soil, to the Valley reaches its climax.

The Peoples Democratic Party and the Bharatiya Janata Party, two most unlikely and most unsuitable political allies, are ruling the state with a mismatched agenda and conflicting goals. 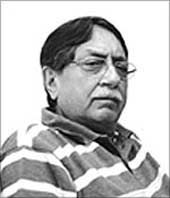 Dulat, image, left, also advised then prime minister Atal Bihari Vajpayee on Kashmir. His book on his years in the Prime Minister's Office will be published soon.

In a conversation with Sheela Bhatt/Rediff.com Dulat provides his assessment of how Prime Minister Narendra Modi has handled the Kashmir issue in the last one year and explains the fault-lines of the coalition experiment in the troubled state. The first part of an exclusive interview:

How do you look at the handling of Kashmir by Prime Minister Modi from May 2014 to May 2015?

In the rest of the country there was apprehension that once Modiji comes, there would be a lot of mess. But in Kashmir there were huge expectations because of the Vajpayee experience. So they said the NDA (National Democratic Alliance) government is coming to power and this is the best thing we could have.

In that sense, of course, there has been a huge disappointment as far as the separatists go because they feel left out -- they do not know where they are and where they will go.

In the meantime, in a situation like this, naturally because Kashmir is so fluid, something keeps happening so Pakistan keeps taking advantage of that.

There are basically three factions today -- the Syed Ali Shah Geelani faction, Shabir Shah's faction and Mirwaiz's faction. So Pakistan is making constant efforts that all three be brought together and they have put all their stakes with the Geelani group. They believe that as of today Geelani is the best bet in Kashmir. Because he talks the pure Pakistani language.

Now if you recall the (then Pakistan president Pervez) Musharraf period, Geelani had become persona non grata with Musharraf. He once even told Geelani, 'Old man, get out of the way, you are hindering the process. We do not need you anymore.' But that whole thing has been reversed and Pakistan is banking mainly on Geelanisaab and they want the three factions to get together.

Also, Mirwaiz understands that he is in the best situation to be in. After all, he is the Mirwaiz, he is the religious head of Kashmir, the pope, so why not remain in that position?

This is not a common statement, but a very strong one being made about Geelanisaab. So I still do not visualise, despite Pakistan's strong efforts, the three factions getting together.

But I think Delhi needs to rethink its separatist policy.

The second thing that will happen is that Modi, during his campaigning, had also made this point in Kashmir that there was no way but the Vajpayee way, these were his exact words. Now, the state election results have satisfied nobody.

As for Muftisaab, he was expecting, speaking realistically, at least 32, 33 seats. That would have made a difference for him. In his party there were people claiming 35, 40, 45 seats just like the BJP was claiming 44. I think the BJP has also fallen short, they have swept Jammu, but have not got a single seat in the Valley.

I had once argued with some friends that the BJP will find it very difficult in the Valley. The same reason for which they won in Jammu, they would not win in the Valley because polarisation became so strong, which is unfortunate.

Sajjad Lone says that he is with them, he is an admirer of Modiji. I think Modiji has also helped him to get him into the state cabinet. Muftiji might have had some reservations, but Sajjad is there. But let us not forget that Sajjad is also a Kashmiri so sooner or later he will start thinking the Kashmiri way. So that is the situation as of now.

As for the alliance, because of the election results and the peculiar numbers, there was no other way for the BJP and PDP but to form a government. It was a very obvious alliance, although very unnatural, but very obvious.

Don't you think this is fundamentally an opportunistic alliance?

If this alliance holds, then it matters to India.

I thought when the alliance took place, and I went for the swearing-in ceremony to Jammu as I was invited by Muftisaab. My feeling was that the chemistry and body language of everyone on the dais looked very good. I thought this coalition will last six years. After having visited Srinagar I have some doubts now whether it will last or not. But I must state that it must last.

When this alliance was made, what was the framework under which they were supposed to work? You said it was imaginative...

Even now Muftisaab is very restricted. So that would never work. So I think Muftisaab has done the right thing.

What about an National Conference-BJP alliance?

The National Conference and BJP could have done it, but I think it would have been more unethical than this. Because, you know, the reason is obvious.

If you remember, six, eight months before the elections I had told you that Muftisaab will become the CM. I had also said there would be an alliance between Mufti and Modi. This relationship is a bit old and is not as new as we might think it to be. It goes before the parliamentary elections. There have been contacts and messages have come and gone.

I call the alliance imaginative because it is good for the state. If it lasts, if it works, it will bring Jammu and Kashmir closer together. It might be wishful thinking, but it is the best thing.

Is the alliance going good?

The government has just been formed. It came to power only in March. So, give him a chance at least, give him two or three years and then see. But the main disappointment there is that all the promises are not being kept.

The floods had caused a lot of havoc, people were looking for some kind of compensation, rehabilitation, reconstruction, which is not happening right now. So there is a huge disappointment on that.

There is also a lot of apprehension in Kashmir as to where this coalition is headed. Like there is apprehension in the Valley that if Mufti remains under Modiji's or Delhi's control, what will happen to Kashmir. So it is that kind of a situation, and at this point my feeling is that Mufti must be supported, the coalition must continue because the alternatives will be worse than this.

What is your reading of Modi's Kashmir policy fundamentals?

Very imaginative. I could have never imagined any other prime minister, not even Manmohan Singh -- Vajpayeeji in any case never gave so much time to anyone -- there was no question of it, giving time to a separatist leader.

I think his handling of Sajjad is an example of his imaginativeness, and his reaching out to people. But it should not stop with one Sajjad alone. You know what happened to Sajjad, he came out so impressed. He talked about the development of Kashmir with Modi. For some months Sajjad only sang praises of Modiji. But it should not stop there.

But you do know what happened to the Hurriyat. When they spoke to the Pakistani high commission, the government cancelled the secretary-level talks which had created some hope.

But that was a baby step needed for...

I agree that a beginning should have been made, you should never stop talking to Pakistan. I think the Hurriyat should not be ignored. I think like Pakistan, they are being unnecessarily ignored.

Every Kashmiri is not a Pakistani. I think this is a wrong feeling in some quarters, all of them are not Pakistani.

But the Kashmiris fall-back position always is Pakistan -- if you are not there, then there they are waiting on the other side. The green flags are a message that if you do not want your flags, then we have green flags too.

This is done by a very small group in Kashmir. If India ignores the moderates in the Hurriyat this game goes on. I can't say Geelani doesn't matter, as he has started to matter more and more.

Because we are ignoring the moderates, you see, this balance game goes on all the time, when you ignore the moderates the hardliners get into this Pakistan game. When you ignore Pakistan the generals become stronger there, the rhetoric becomes stronger, the body language becomes adverse. 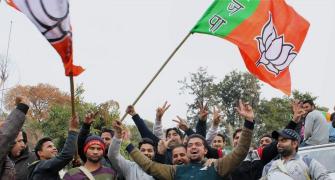 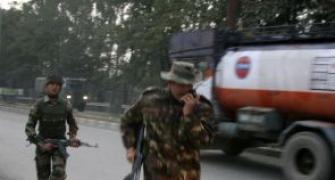 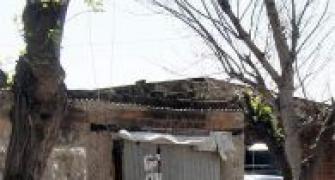 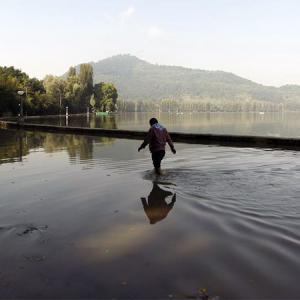 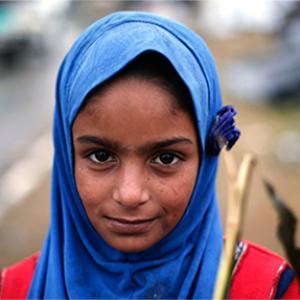