'It is not the duty of the government to protect minority religions or promote it.' The Supreme Court has issued a notice to the Centre over a petition that seeks to challenge the budgetary allocations for welfare schemes for minorities and also challenges the Constitutionality of a minority commission.

The petitioners claim that the government is spending Rs 4,800 crore (Rs 48 billion) towards teaching skills to minorities and promoting culture which, they allege, is a violation of Article 27 of the Constitution.

Article 27 says 'no person shall be compelled to pay any taxes, the proceeds of which are specifically appropriated in payment of expenses for their promotion or maintenance of any particular religion or religion denomination'.

Advocate Vishnu Jain is appearing for the petitioners in this case, who wish to remain anonymous.

"What we are arguing is that a minority as a class cannot be treated as one," Jain tells Rediff.com's Syed Firdaus Ashraf.

Why did you move this petition?

Our Fundamental Rights under Article 14 (equality), 15 (social equality) and 27 are being violated by the National Commission for Minorities Act, 1992.

We are taxpayers and the central government is spending around Rs 4,800 crore on minority communities.

This is a direct violation of Article 27. Therefore, we filed this public interest litigation.

Why is Rs 4,800 crore being spent on minorities? What is the purpose of this budgetary provision?

There are various schemes for minorities. For example, the Waqf Board gets funds to commercialise their properties.

(Money is also spent) on education and upliftment of minorities. So there are different categories.

What is the respective share of each minority community from this allocation?

The government has not specified that. There are Jains, Buddhists, Christians and Muslims among minority communities.

The word that has been used in the budget is 'minority'.

All religious minorities of India have a share in this allocation.

What we are arguing in the Supreme Court is that minority as a class cannot be treated as one.

In our petition, we are saying be it Jains or Muslims, you cannot categorise the entire community as backward educationally or socially.

The Justice Rajinder Sachar commission report says Muslims are the worst community in India in terms of education and economic well-being. Don't you think they need upliftment and government help?

Muslims who are socially and educationally backward get reservation under Article 340.

They get benefits as they fall under 'other backward castes'. They have a place in it.

If more is needed, they can create an OBC commission and look into this issue.

The government on its own cannot run minority schemes.

The condition of Muslims in India is very bad -- economically and socially -- do you dispute this?

Ask this question to a politician. I am only a lawyer who is representing facts and giving a legal angle.

How can I say what the government needs to do to uplift the Muslim community, or for that matter the Sikh or the Jain community?

There must be some reason for such schemes or do you think they only amount to appeasement?

There is appeasement as they are spending Rs 4,800 crore of taxpayers' money on minorities.

You are accusing the Modi government of minority appeasement. But the general perception is quite the opposite.

I am a lawyer and I am talking in legal terms. I am not a politician.

In 1992, the National Commission for Minorities Act came into force.

Under this Act, the government can identify minorities and run welfare programmes for them.

We are saying this (violates) Article 29 and Article 30 under which the minorities have a right to run their own educational institutions and maintain it.

They have their rights to protect and promote their culture and religion. It is not the duty of the government to protect minority religions or promote it. 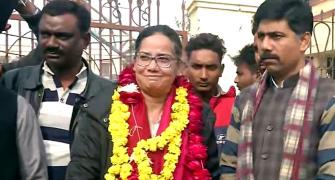