'The worst case scenario for Pakistan is a full-scale Taliban takeover of Afghanistan.'
'Pakistani militants would be inspired and emboldened and seek to replicate the Taliban's successes in Pakistan.' 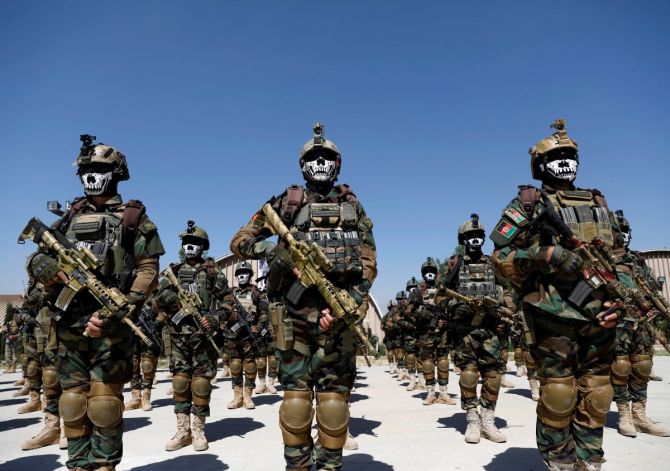 "Pakistan's sponsorship of the Afghan Taliban is beginning to look like another case of the Frankenstein's monster effect."

Dr Michael Kugelman, deputy director and senior associate for South Asia at the Wilson Center, a think-tank in Washington, DC discusses the intensifying war in Afghanistan with Rediff.com's Archana Masih.

Do you believe that the region itself will see prolonged security tension if the Taliban entrenches itself in Afghanistan, with India and Iran bearing the brunt of unemployed jihadis out to create mayhem?

An intensifying war will have major spillover effects across the region, with bordering States like Pakistan, Iran, and the Central Asian States bearing the brunt.

One of the initial impacts of cascading violence will be new surges of refugee flows. The drug trade will also receive boosts.

International terror groups like al-Qaeda and ISIS will also benefit from the growing violence, enabling them to solidify their strongholds in Afghanistan and to pose threats to regional actors.

If there's any silver lining from the US withdrawal -- and it's certainly not easy to find any good news in this context -- it would be that all of the regional players face the same types of threats post-US withdrawal, suggesting that there is an opportunity for the region to work together to figure out how to mitigate the impact of these threats.

Do you think the Afghans who have come of age post 2001 will push back against the Taliban? Or will they like communities in Iraq and Syria be pulverised into submission by a never-ending reign of terror?

Certainly, one can argue that in a country where young people are demographically dominant, there are large numbers of people who have never experienced Taliban rule, and who are determined to do whatever is possible to ensure that the country's post-Talban gains --especially major improvements in health and women's rights -- are not squandered.

But the question is what, on tangible levels, can these people do. Some of those that have benefited from the gains have already been gunned down -- think of the democracy activists, journalists, and female lawyers caught in the crosshairs of the target killing campaign.

One area where we could see young people mobilising to take on the Taliban is with the people's resistance movements -- the anti-Taliban militias resurging across the country.

It is heartening that despite the insurgents' best efforts to snuff out resistance --including in traditional anti-Taliban strongholds in the north -- we are seeing a rise in these anti-Taliban groups.

Certainly, the longer term implications of these militias -- armed, violent actors that in most cases have no allegiance to the government -- are deeply troubling.

But in the near term, they can take some of the heat off Afghan forces in the seemingly herculean effort to regain some momentum back from the Taliban. 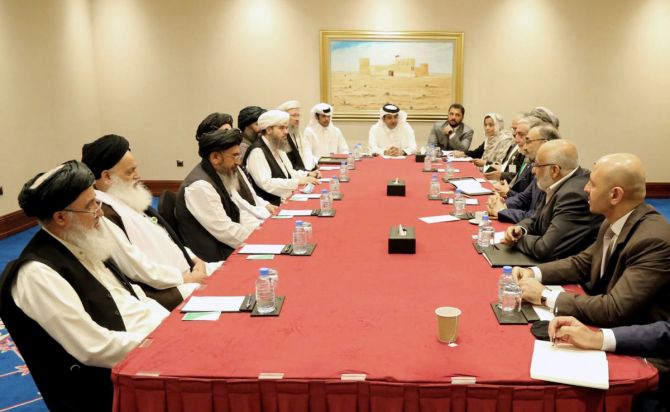 Can China take the Taliban at its word (no doubt at Pakistan's insistence) that it will not interfere in Xinjiang? Or will the continued suppression in Xinjiang provoke the Taliban to open a new front?

Frankly, I'm not sure the Taliban has ever been terribly concerned about the plight of the Uighurs.

The group, like other Islamist militant organisations, including the Pakistani Taliban, may try to tap into Muslim grievances -- such as the plight of Muslims suffering around the world --to gain support. But at the end of the day, the Taliban's focus is parochial: It's fixated on Afghanistan only.

The Taliban may have ties to global jihadist groups, and to other countries. But its operations strategy revolves around Afghanistan, and Afghanistan only.

This is why Beijing shouldn't have much to worry about. I seriously doubt that the Taliban is conniving with Uighur militants in Afghanistan to wage attacks on Xinjiang.

If China asks the Taliban to deny space to these militants, I don't think this is an ambitious task at all. 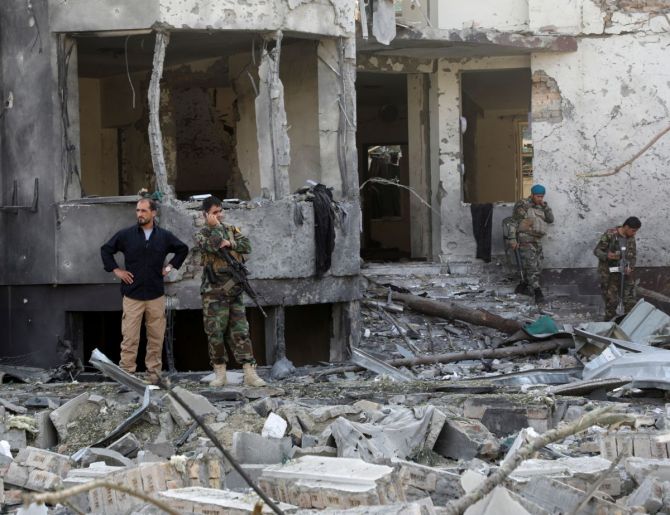 What does China hope to gain by keeping the Taliban in good humour? Is it primarily motivated by its concerns over Xinjiang? Or worry that a restive Afghanistan could undermine the CPEC?

China has two core goals in Afghanistan, and it believes the Taliban can help them achieve both.

First, it wants to degrade the threat posed by the TIP, the Uighur militant group. I really think Beijing exaggerates this threat, in order to have a pretext to crack down on Uighurs in Xinjiang.

At any rate, China is keen to get the Taliban to agree to deny space to the group, to make it harder to have a stronghold in Afghanistan.

China's other goal is to pursue infrastructure investments in Afghanistan. While Beijing is often willing to invest in violent spaces, it has not been a major economic player in Afghanistan, because of the war.

Beijing wants to bring the Belt and Road Initiative to Afghanistan, and it can only do this if there's more stability.

If Beijing can get the Taliban to promise it won't try to obstruct the development of Chinese infrastructure projects in areas controlled by the insurgents, it will have a greater chance of moving forward.

In effect, by cultivating the Taliban and engaging with it more, Beijing is in a better position to get some understanding from the Taliban that enables China to pursue its interests in Afghanistan.

Ambassador Hussain Haqqani warned in his Foreign Affairs piece 'Pakistan will regret aiding the Taliban's resurgence', that it may not be able to run with hares (the Taliban) and hunt with the hounds (the anti-Taliban international front). Do you agree?

Playing a double game is a risky gambit. But one could also argue that on one level, this strategy has paid dividends for Pakistan.

Its close ties to the Taliban has enabled it to become a major player in the peace and reconciliation process, leading it to work closely with the US, the UK, China, Russia, Turkey, and other key players.

Of course, if, as is likely, the peace process never takes off or collapses, Pakistan will be blamed for this failure.

Islamabad may claim its leverage over the Taliban is limited. But the Pakistanis have provided safe haven to the group's leaders, allowed the group's fighters to receive medical care, and provided recognition and legitimacy to the Taliban since the 1990s.

There is clearly much leverage to draw on. If the peace process fails, I think we can expect some of the same countries that Pakistan is working with now on the peace process to lament that the Pakistanis didn't do enough to raise the costs for the Taliban of not agreeing to reduce violence and commit itself to talks. 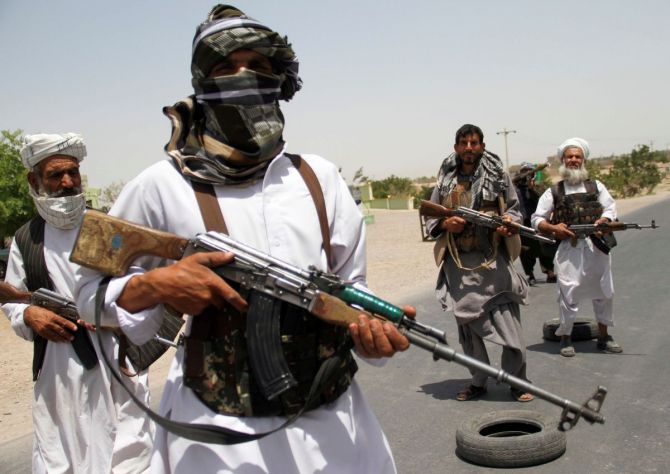 IMAGE: Mujahideen support Afghan government forces in their fight against the Taliban on the outskirts of Herat province. Photograph: Jalil Ahmad/Reuters

What is the worst case scenario for Pakistan -- from a Taliban government in Kabul, a civil war in Afghanistan with no victors and a flood of refugees?

There's an irony here, given that Pakistan's longstanding support for the Taliban has helped strengthen the insurgency, and yet a strong insurgency in Afghanistan can have very dangerous spillover effects for Pakistan.

Increasing violence and Taliban gains will spark refugee flows at a moment when Islamabad is reluctant to take on new refugees.

Additionally, more and more destabilisation in Afghanistan will aid the Pakistani Taliban leadership, which is based in Afghanistan and will be able to consolidate its bases and organise more attacks in Pakistan.

But the worst case scenario for Pakistan is a full-scale Taliban takeover of Afghanistan. This would pose major security risks for Pakistan as Pakistani militants would be inspired and emboldened and seek to replicate its (the Taliban's) successes in Pakistan.

This is nothing to sneeze at, given the horrific campaign of anti-State violence waged by the Pakistani Taliban -- a group that has resurged in recent months -- for nearly a decade, until Pakistani soldiers launched a counterterrorism offensive against it in 2014 that badly degraded it and sent its leadership into Afghanistan.

Pakistan's sponsorship of the Afghan Taliban is beginning to look like another case of the Frankenstein's monster effect. 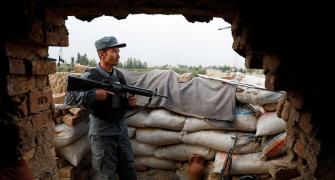 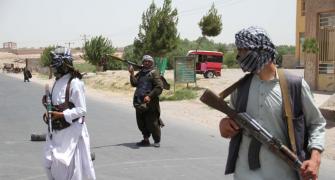 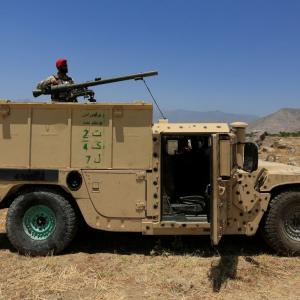 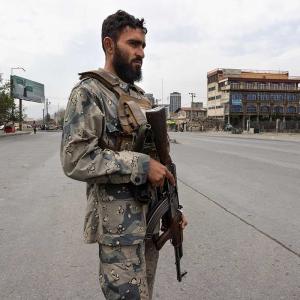