News
Business
Movies
Sports
Cricket
Get Ahead
Money Tips
Shopping
Sign in  |  Create a Rediffmail account
Rediff.com  » News » Why Delhi is concerned about the Taliban

India is apprehensive about the Taliban's return as it would mean loss of access to Baluch rebels and help to the restive tribals of Waziristan.
This would be a setback to the Indian strategy of returning the compliments of death by a thousand cuts to Pakistan, notes Colonel Anil A Athale (retd). 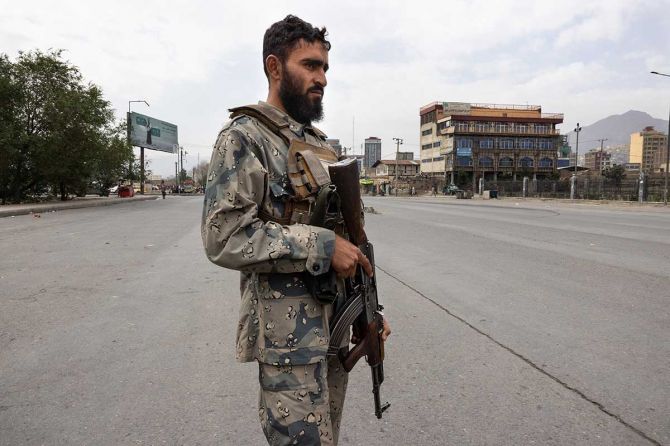 The Americans returned to Afghanistan in 2001 when it became the victim of fundamentalist Muslim terrorists it had created.

As the leader of the 9/11 attacks was traced to Afghanistan, the US found a ready target to lash out.

The ragtag Taliban regime was no match for American might and succumbed within a month. Instead of declaring a victory and withdrawing its forces, the US stayed on to totally eliminate al-Qaeda.

As the operations continued, as a long term measure, the US set itself the goal of nation building in Afghanistan. A mission that was the usual trap that superpowers fall for, of expecting to bring about social change with force.

$3 trillion and 2,000 deaths later, the Americans realised the futility of the mission and decided to leave Afghanistan.

Since the beginning of the American withdrawal from Afghanistan, there has been a general sense of foreboding that a Taliban takeover of Afghanistan is imminent. Recent history tells us otherwise.

A Taliban victory is neither inevitable nor easy. Besides past events, this notion betrays a lack of understanding of the co-relation of forces and its interaction with tactical outcome.

As the Taliban shift from fighting a guerilla war to fighting in large groups and holding ground, they also become vulnerable to air power and weapons like artillery that a regular army possesses. 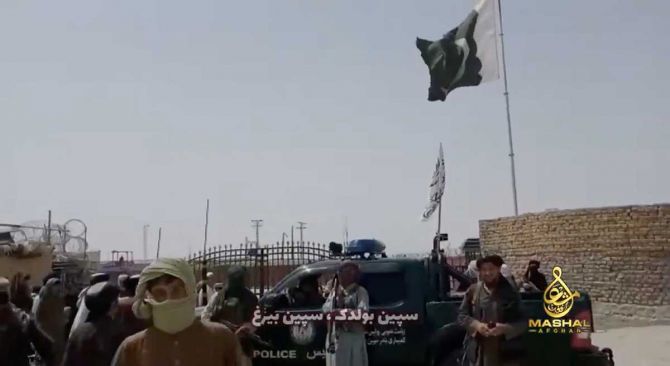 In Jihad 1.0, the Russians withdrew from Afghanistan in 1989. The Soviet Union collapsed in December 1991 and all military and economic aid to the then Afghan regime in Kabul ended. Yet the Afghan regime survived till September 1996 when the Taliban finally captured Kabul. It needed direct participation by the Pakistani army that 'loaned' its officers and tanks to the Taliban to achieve victory.

One of the main reasons for the Russian defeat was the modern anti-aircraft weapons supplied by the US to the Taliban that checkmated the Russian airpower.

Afghanistan went through a six-year long civil war wherein the Taliban were opposed by the Northern Alliance largely consisting of the Tajik/Uzbekh minority.

The Taliban were and are seen as a largely Pashtun-dominated force. Inspiring leadership by Ahmed Shah Masud -- often called the Lion of the Panjsher valley -- also played a role in the Afghan resistance to the Taliban.

Cut to 2021. While on the surface military situation may seem a repeat of 1996, there are indeed major differences. Sure Pakistan is likely to back the Taliban with heavy weapons and trained officers, yet there is no supplier of modern arms.

China could be tempted to help the Taliban, but would be cautious as to what the Taliban's attitude will be towards the Ughur Muslims in Xinjiang. Pakistan too will be cautious as Washington has kept the sword of the anti-terrorism funding blacklist hanging over Islamabad's head.

An economically weak Pakistan can ill afford loss of IMF/World Bank financial support. Unlike the last time, Saudi Arabia is no longer an enthusiastic supporter of the Taliban brand of Islam.

Once the Taliban shift from guerilla tactics to conventional war and begin to hold ground, they would provide targets for American air/missile/drone power.

The situation in Afghanistan is more likely to develop on the lines of the civil war that took place in the country between 1992 and 1996. The Taliban is likely to control the countryside while the Afghan goverhment will control the cities. 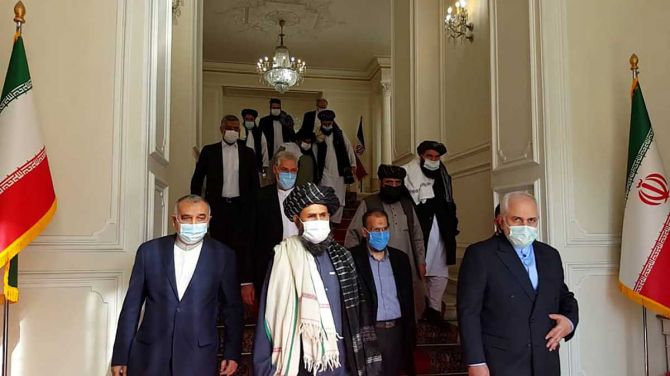 Iran is another major player as the western Herat province in Afghanistan is largely inhabited by Shias. The Sunni Taliban's known antipathy to Shias is well known and Iran will do everything in its power to stall the Taliban.

Even Russia, although pleased at American discomfiture, would be wary of the Taliban as it could have a spillover effect on the Central Asian Republics, presently under Russian influence.

The only country keen on a Taliban victory (at least in the short term) is Pakistan. It fulfills its long held dream of 'strategic depth' whereby Pakistan hopes to use Afghan territory to base its aircraft and missiles to keep them safe from the reach of Indian airpower.

China may also see some advantage in a Taliban victory as it may gain access to Afghanistan's mineral wealth.

Another major benefit for Pakistan is that a Taliban controlled Afghanistan will limit India's ability to influence events in restive Baluchistan. 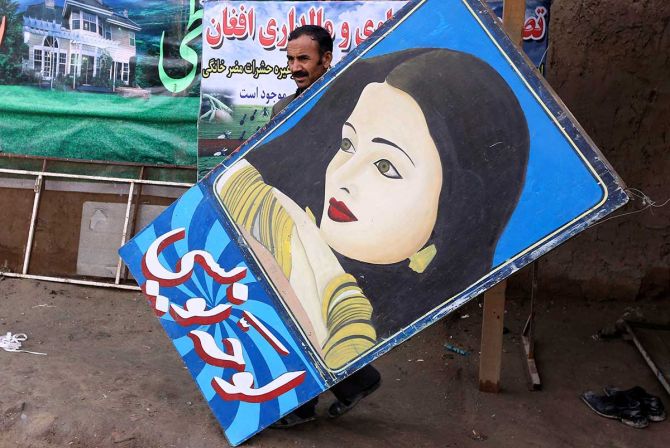 IMAGE: An artist carries a caricature of a Bollywood actress in Kabul. Photograph: Omar Sobhani/Reuters

India is apprehensive of the Taliban's return as that would mean a loss of access to Baluch rebels and help to the restive tribals of Waziristan. This would be a setback to the Indian strategy of returning the compliments of death by a thousand cuts to Pakistan.

India has invested heavily in soft power by building dams, roads and hospitals in Afghanistan. A further boost to Indian influence was given by India's cricket diplomacy (India has mentored Afghanistan cricketers). Bollywood's popularity and cultural and educational exchanges have given India a positive image in Afghanistan.

All this may come to naught as under the Taliban the Pakistani ISI would undermine/destroy Indian built assets.

Another worry for India is that leftover American armaments could ultimately land in Pakistani hands. But given the thoroughness with which the Americans cleared the Bagram airbase, it is possible that they would have rendered most leftover arms non-functional before withdrawal. However, Afghan army units defecting to the Taliban with arms cannot be ruled out. 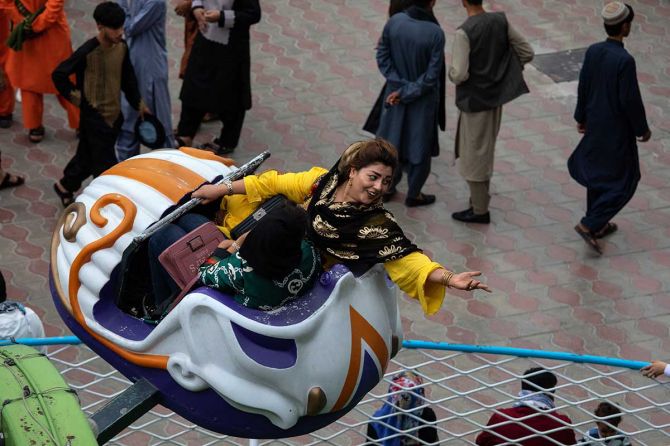 The biggest sufferers of a Taliban takeover will be Afghan women. The Taliban with a combination of Sharia law and tribal customs have already begun a crackdown on women's education and freedom.

It is a shame that a region that gave brave women like Gandhari (Kandahari from Kandahar) to the world should be the oppressor of women.

Ultimately, the best check and opposition to the barbaric Taliban can come from women power. If women who comprise 50% of Afghanistan's population were to rise and fight the injustice, the Taliban can never win! 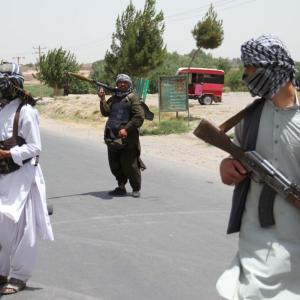 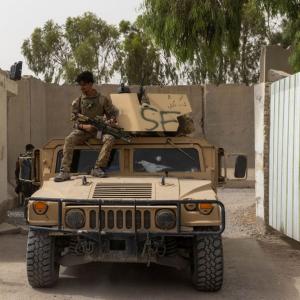