'Tiger reserves were created to protect areas from developmental activities.'
'If we go ahead with these projects, then it is a complete mockery of our institutions and our laws, it is against everything we have stood for, our Forest Conservation Act, our Wildlife Biodiversity Act.' 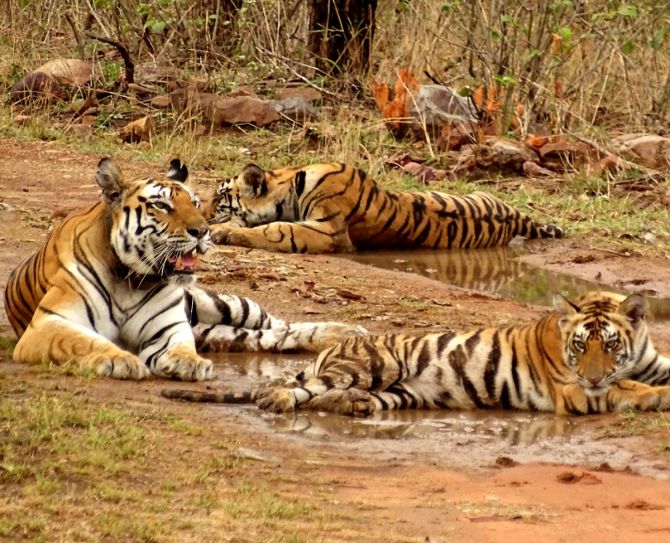 The most impressive achievement of tiger conservation in India -- rarely lauded -- has been its ability to hold on to the tiger's geographical distribution.

Not many conservation programmes around the world can achieve this.

In India, despite a few hiccups, we still have tigers occupying all the habitats they were occupying at the beginning of Protect Tiger.

This no longer seems to be the case with tiger reserves and sanctuaries being brought under the umbrella of development projects.

Dr Raghu Chundawat who has done pioneering work on the snow leopards of Ladakh, arrived at the Panna Tiger Reserve in 1995 to understand first hand the problems that the tiger community there were facing.

He has been living in Panna for the last 25 years along with his wife Joanna Van Gruisen, a wildlife photographer and writer who is also deeply committed to the conservation of wildlife.

"It is unfortunate that the government sees development and growth only from the financial aspect ignoring all other aspects," Dr Chundawat tells Rediff.com Senior Contributor Rashme Sehgal.

The development paradigm adopted by our government is putting our tiger reserves and sanctuaries increasingly under threat.
The Panna Tiger Reserve with which you have had a long association is facing vivisection with the ministry of water resources having green signalled the Ken and Betwa river interlinking.

Our protected areas whether they be our tiger reserves, sanctuaries or national parks but generally all our forest areas are under threat from the present developmental paradigm.

These linear projects are fragmenting our forests making it more and more difficult for our wildlife population to crossroads, railway lines and canals all being built in the name of development. This has become a serious problem. 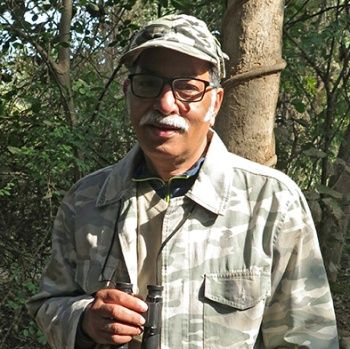 What is shocking is that in all this developmental planning, the government either at the state or central level has made no attempt to involve scientists and environmentalists who have worked on issues of water, wildlife and ecology when these blueprints are being drawn out? Why is that?

It is unfortunate that the government sees development and growth only from the financial aspect ignoring all other aspects.

They are concerned only with the amount of money they can earn from a project whereas other aspects such as clean air, clean water, the quantity of water available, all these inputs that make for a healthy environment, are being ignored.

What is the point of economic development if the public ends up having to spend a great deal of money on their health?

You have had a long association with the Panna Tiger Reserve going back over 25 years?

Yes. I came to the Panna Tiger Reserve way back in 1995. Since then I have been associated with the reserve in one form or the other.

I understand you were one of the leading wildlife experts who highlighted how Panna Tiger Reserve was losing all its tigers to poachers?

I realised around 2004-2005 that the population of the tigers in this reserve was declining and we raised this issue.

Then we ran a campaign on this for four to five years.

Of course, the tigers did not disappear in a period of one year rather the decline took place over four to five years between 2004-2009.

I raised the issue as did many others. The problem with the authorities is that they went into a state of denial hoping they would able to restore the tiger population. 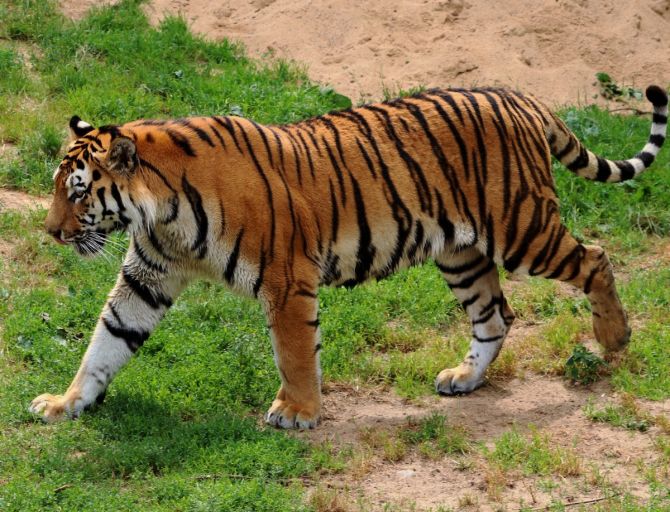 You have been living in Panna all these years. What is your reaction to the recently announced Ken Beta interlinking program?

I find it a very badly planned project. Just because you want to do something, they have come up with this very poorly conceived argument.

But this is a complete lie. Their calculations are completely false because they are depending on how much water is being utilised.

There are very few districts in Madhya Pradesh that are not water scarce. Ninety per cent of MP is water stretched because they over utilise water.

Panna is not one of them. Water utilisation in Panna is less because they are growing wheat and chickpeas which use less water.

The other areas are growing sugarcane and other high water-consuming crops.

There are already dams on the Betwa river which are downstream.

The new dams are coming up upstream and this will create a situation where they will no longer be in a position to give water to Uttar Pradesh.

So they are planning to take water from Ken to Betwa for these new dams that are being built upstream. This water deficit will be met by the Ken River.

But the Betwa already has seven dams built on it?

That is what I am saying. The new dams are being built upstream.

There will not be enough water downstream so this deficit will be filled by the Ken river. Diversion of water is being done to fill that deficit.

But the Ken river is no longer perennial water. I understand that in the last two to three years, it has been drying up during the summer months?

Ken is a perennial river though yes, in the last few years, the water flow has gone down drastically.

Another problem is that the water calculations for this project were done 30 to 40 years but the water situation has changed and a fresh reassessment should take place now.

No fresh assessment has been done of late. The other problem is that the government has refused to put the water flow data in the public domain.

Have you not asked for this data?

We have asked for it but they say it is international water data so they cannot give it.

Yes. The Ken and Betwa water goes into the Ganges and the Ganges goes to Bangladesh so it becomes international water.

This interlinking will result in the bifurcation of the Panna tiger reserve, it will lead to the submergence of a large chunk of forests and adversely impact the entire habitat of this region?

We all know the consequences and the effectiveness of dams. We have built more than 2000 dams in the last 70 years.

South Asia Network of Dams Rivers and People has documented all this very well and shown that none of these dams works.

The West is breaking down dams. We have enough information in the public domain all over the world to know that dams are ecological disasters. I don't know why we are pursuing it.

Tiger reserves were created to protect areas from developmental activities.

If we go ahead with these projects, then it is a complete mockery of our institutions and our laws, it is against everything we have stood for, our Forest Conservation Act, our Wildlife Biodiversity Act.

The world will want to know where we stand on conservation, on the protection of tigers, on our institutions that have been put in place to protect our forests and wildlife. How will this impact the Panna Tiger Reserve?

A large area of the reserve will go underwater with the creation of a 100 square kilometre reservoir.

About 60 to 70 per cent of the tiger habitat will end up being submerged and we will lose a huge chunk of forest.

At a time when we are trying to protect every single tree we have, we will end up losing 30 lakh to 40 lakh trees that will never be replaced.

What will happen to the tiger population?

They will become isolated. I don't think the tiger population here will remain viable enough to survive on its own.

But you must have taken up this issue with the concerned authorities?

The problem starts with the people who are responsible for the forests, namely the forest department.

Before any proposal is forwarded, the file is first placed before officials in the forest department.

There is a Form Three which the concerned forest official has to fill which states clearly whether he agrees with a project or not.

All he has to do is sign and say one word no. The forest department has this authority, but if they do not do their job properly, there will be no one to protect these forests. They did not say it.

But for their selfish purpose, an entire reserve is being destroyed. This is not just a tiger reserve, it is also a UNESCO World Heritage Site.

Absolutely. We losing the entire flora and fauna of a region, an entire virasat as it were?

Yes. We all know that this is an ecological disaster, but what is more worrisome is the complete disregard for all established norms, laws and institutions both at the national and international level.

After all, this is a UNESCO Biosphere Reserve.

What has the reaction been of the local villagers living in and around this reserve?

They are quite happy. Bundelkhand is a very feudal society.

The majority of farmers are landless or possess very little land.

They will get some money as compensation and so, they can restart their lives somewhere else.

Farmers living along the Kathar area along the Ken river flood plain will be very unhappy because this is a very productive area. 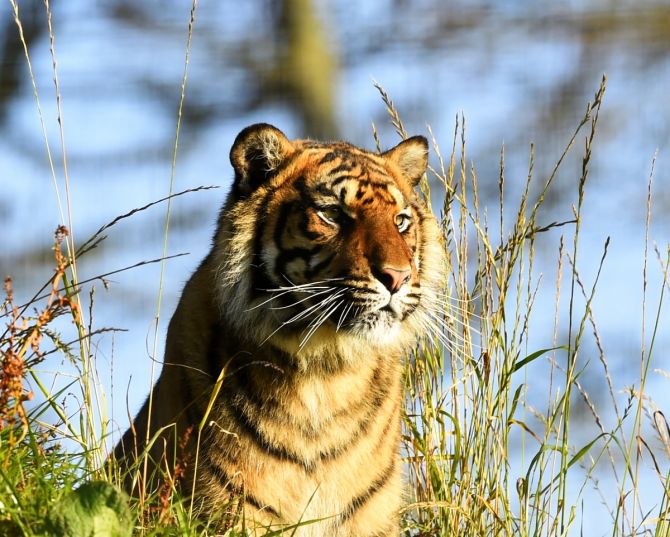 I understand creating a dam will also affect the Ghariyal sanctuary further downstream?

Some amount of water will continue to be released through one does not know what amount that will be. But going by the past experience of dams, the rivers environmental flow will be affected and that will adversely affect the gharial sanctuary also.

Most of our rivers are becoming akin to drains. Do you see the Ken and Betwa going the same way?

When you build a dam, you change not only the flow of the river but also halt the minerals that flow in it. You change the river's entire ecology.

Shocking, to say the least?

They are blinded by their development push, They do not see any other way of achieving their goals. This is the sad reality.

Also, I don't know what their agricultural plan is. We are over producers of wheat and rice.

By giving more water and allowing our farmers to produce more, our farmers will not become richer. Overproduction will see prices go down.

Input costs have increased but prices are decreasing and farmers earnings are becoming less and less.

We need to rationalise our approach to agriculture. In no way can this be called a visionary project.

On one hand we hear of the government keen to promote tourism but if we are not going to preserve our tiger reserves, how will they achieve this goal?

Of course, the entire Panna tiger reserve will not be destroyed, but the concept and philosophy behind creating these reserves will be destroyed.

At a personal level, I feel very angry and frustrated that the government is not able to see the way we see things and continue to push for a completely outdated developmental model.

Will a time come in the near future where we see fewer and fewer tigers?

The revival of our tiger population will be hampered by these present activities.

Rather, we will be stuck with these present numbers of 2,000-30,00 tigers and not be able to double the numbers as could have happened.