News
Business
Movies
Sports
Cricket
Get Ahead
Money Tips
Shopping
Sign in  |  Create a Rediffmail account
Rediff.com  » News » Is this why Modi is nervous?

'In this country, if any government acquires one of these images -- anti-farmer, or anti-poor or corrupt -- the government doesn't survive.'
'The Modi government is fast acquiring that anti-farmer image, that is why it is nervous.' 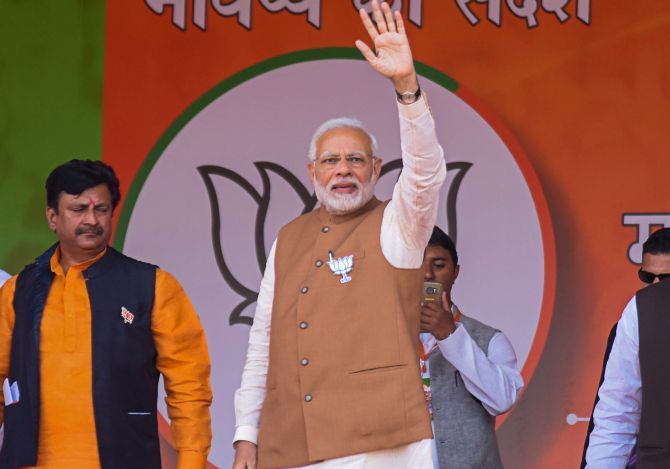 "If farmers's prosperity could be measured by words that the government offers them, then the Modi government would have definitely made the farmers more prosperous. But if you measure it by actual action and actual money spent, then there is actually nothing on the ground," Swaraj Abhiyan President Yogendra Yadav tells Archis Mohan.

What is your assessment of the recent farmers protest by the Naresh Tikait-led Bharatiya Kisan Union and the Narendra Damodardas Modi government's response?

We should look at the protest in the context of the widespread farmers upsurge that we have seen all over the country in the last year-and-a-half, to be precise beginning in Maharashtra on June 1, 2017, followed by Mandsaur in Madhya Pradesh. Since then we have seen a series of protests, under different banners.

Occasionally some big banners like the All India Kisan Sangharsh Coordination Committee (AIKSSC) have also emerged. We saw a protest by the AIKSSC (which comprises nearly 190-farmer outfits) last November, a kisan bandh, gaon bandh call in June this year, this particular BKU march and the proposed AIKSSC protest on November 30.

What unites these apparently diverse organisations in protests is the disquiet with the existing regime -- the current regime is anti-farmer; and the two demands that every single farmers' protest has asked for.

These two are: Firstly, remunerative price defined as input plus 50 per cent as the statutory right of the farmer and secondly, a one-time farm loan waiver.

So interestingly in this protest march last month, these were the top two demands farmers raised. They are not part of the AIKSSC banner and the organisation that is seen to be somewhat close to the current regime even they were constrained to raise these issues.

But I am not sure what the farmers march achieved. The BKU, led by Naresh Tikait, is an influential caste-based farmer organisation. It led a fairly peaceful and large demonstration and I thought the decision to prevent them from entering Delhi was completely unjust. Their charter of demands had almost no demand which was outlandish.

The BKU, of late, has been seen to be close to the BJP (Bharatiya Janata Party). I thought the BJP would wish to make some concessions to shore up its own image, but finally when I saw what the government has apparently conceded, I must say I was disappointed.

I am not sure what has been gained on two critical issues of remunerative prices and loan waiver.

There is not a word on income guarantee for farmers.

On old diesel tractors being phased out, the government simply said it will appeal to the National Green Tribunal.

You don't walk 300 kms from Haridwar to Noida for a ride to Kisan Ghat. I am not sure, unless something I have missed, or was unspoken or unwritten, I don't know what was achieved for the farmers of India.

You said the Modi government is anti-farmer. But some might argue that it has been proactive in announcing several schemes to improve the farmers, including increasing the minimum support price.

One thing that the government has been very proactive about is publicity.

If farmers's prosperity could be measured by words that the government of India offers them, then the Modi government would have definitely made the farmers more prosperous.

But if you measure it by actual action and budgetary allocation and actual money spent, then there is actually nothing on the ground.

The problem is the government speaks so much about MSP that it has led ordinary people to believe that it must have done something nice on MSP.

In reality, all the three claims on increasing MSP -- including in the Budget and most recently after the farmers march -- made by this government are factually false.

The government said it had fulfilled their electoral promise, which it has not, because the promise was to provide farmers income based on the Swaminathan Commission recommendations, that is input cost plus 50 per cent.

However, what the government has done is announced partial cost, called A2+FL in technical terms, plus 50 per cent.

The government has claimed it to be a historic increase, which is patently false.

If you look at the entire five-year tenures, UPA-I saw the highest, while that during UPA-II was the lower. The current NDA's is much lower than both of them.

The third claim was they have given a big bonanza to farmers, that is currently being tested because the important thing is not what you declare as MSP, but what the farmers get.

We are in the first week of procurement and a recent analysis (by Harish Damodaran in The Indian Express) showed every commodity, except cotton, farmers were getting prices much below MSP.

The government procurement has failed in two of three crops that have arrived -- moong, urad, soybean and now bajra.

In all of these, with some exceptions, the government is simply not procuring.

MSP is purely on paper. All the claims of the government with regard to MSP are false.

What is different about this government is the scale and amplification of propaganda which is extraordinary, I must say.

But do you think any government has the wherewithal to procure on MSP? Secondly, how do loan waivers help?

I have increasingly come to think that there is a limit to State intervention in the market.

Frankly, I do not think the government can procure all the 24 crops for which MSP has been declared and handle it in any intelligent way. So, we have to think of ways.

I have looked very closely at the Telangana experiment under the Rythu Bandhu scheme, that encompasses direct income support. So, unlike many friends in the farmers movement, I am open to income support rather than price support.

But in the short term, price support is the only way and this is the promise the BJP made in its election manifesto. That is what it should begin with, but gradually think of transitioning to direct income support.

On loan waiver, frankly it is not a solution by itself, and if done frequently can hit rural banking and damage those very farmers for whom these are demanded.

We are demanding farm loan waiver as a one-time waiver to be done to supplement the income support that we want.

If you waive someone's loan without giving him income support, the farmer will be back after two years demanding another loan waiver.

To my mind, a loan waiver is a necessary component at this stage of a package of which central component is income support.

Today, if you give farmers such an income support, they won't be able to utilise it as it would go into debt servicing. So, it is only a one-time solution.

The reason why a one-time solution is required because farmers have simply no capacity to pay.

The reason they don't have the capacity is not because of their own lethargy, or their own mistakes, but because of a systematic policy bias that has kept price of farm produce suppressed for almost five decades.

In any sector of the economy, if you are in a debt trap for reasons that are not of your making, the economy should step in to rescue you.

This happens for industry, for the corporate sector and the same logic must apply to farmers.

But I must reiterate I am against the culture of repeated loan waivers.

Farmers, it is said, are too divided to vote as a bloc. What is your assessment of the influence, if any, these farm protests would have on the coming assembly and the Lok Sabha elections?

In the last one-and-a-half years, if you look at several struggles -- in Maharashtra, the Nashik to Mumbai march, milk agitation; several agitations in Madhya Pradesh, Rajasthan, rise of farmer polticians, gherao in Punjab by farmers, struggle in Chhattisgarh, ongoing agitations by Karnataka farmers -- this is an unprecedented phase in the history of the farmers movements.

Something like this packed in such a short time has not been witnessed since the late 1980s.

I think what the cumulative impact of all this is that the current government is acquiring the reputation of being an anti-farmer government.

In this country, if any government acquires one of these images -- anti-farmer, or anti-poor or corrupt -- the government doesn't survive.

The Modi government is fast acquiring that anti-farmer image, that is why it is nervous.