'Digvijay Singh has lost all credibility'

January 18, 2011 14:07 IST
Congress General Secretary Digvijay Singh is facing brickbats once again -- this time for his remarks that the Bharatiya Janata Party leaders from Madhya Pradesh gave financial help and shelter to three Samjhauta Express blast accused. These allegations have certainly not gone down well with the BJP-led government in MP.

How has the BJP in Madhya Pradesh reacted to Digvijay Singh's remarks on the Samjhauta blasts case?

Digvijay Singh is being reckless in his choice of words and the latest statement by him has made him a laughing stock in MP. Earlier, this man used to be known for his credibility but today the general impression in the state is that he has gone berserk.

But it's a fact that the three persons he refers to are from Indore and they managed to get away.

We are all framing opinions and passing judgements on the basis of a confessional statement (by Swami Aseemanand). Let me assure you that if there are people allegedly involved in the Samjhauta case, then be assured they will be brought to book.

Has the government opened its eyes to the concept of terror by saffron elements?

To me, it all seems like mindless politics. The likes of Rahul Gandhi say that the Lashkar-e-Tayiba is less dangerous compared to Hindu radicals. Whatever happened to the claim by American investigators who too had pointed out that the Samjhauta blast was the handiwork of the Lashkar?

Are all of you in denial about this new phenomenon in the world of terrorism?

A statement by Aseemanand is not enough to substantiate things. Just because Rahul Gandhi says that Hindu terror is more dangerous, that does not become the truth. These people have gone public with their mindless statements without understanding its repercussions.

Coming back to Digvijay Singh, has his statement caused a dent in the image of the BJP in MP?

Not at all. I do not understand why he is making such baseless statements. If he continues to do so then the Congress will also lose its opposition status in the state. Personally, I feel Digvijay has lost all his credibility and if he thinks he will return to power by making such statements then he is mistaken.

Has the MP government been cooperative in the Samjhauta probe?

Yes. The investigations are not taking place within the state. There are links to the state, which have been spoken about. Aseemanand's claims are yet to be substantiated and Sunil Joshi is dead. The MP government has nothing to do with the probe. The investigation is being carried out by the National Investigation Agency. Let them do their job. I do not think it is fair for Digvijay to make statements at such a juncture and trust me, if he continues to do so it will only help the BJP in the state.

Will the state government cooperate with the NIA?

If a formal request is made then it will surely cooperate. Any state government is obligated to extend support in such matters. The government will be fair in this case.

According to investigations, the accused are from Indore. Is the government aware that there are fringe elements who can carry out terror activities?

RSS chief Mohan Bhagwat already said that none of the three accused belong to the organisation. If they were linked to the outfit in the past, it's unfair to blame it now. If there are fringe elements in MP and they are traced, the government will deal with them strictly. The government will clean the mess and as I said the culprits will be brought to book.

Is MP a hub of fringe elements spreading terror?

That is incorrect. Those accused in the Samjhauta blast say a lot about the case. The MP connection to the attack has been stretched to no limits to serve political motives and this will boomerang. Have all the other terror-related cases been solved? Barring the 26/11 case, no other case has been taken to its logical end.

Why is there no word on the Jaipur blasts? Why are people not talking about the twin blasts in Hyderabad and also what about the Mumbai train bombings of 2006? There seems to be no progress in the 2008 Delhi blasts case as well.

On the contrary, Congress leaders go to Azamgarh and convince the people there that they have nothing to do with the investigations in these blasts. What sort of a precedent are they setting?

I agree, but I must add that there should be no over-enthusiasm in cracking these cases only to create a hype to serve political ends. This will only harm the parties politicising the issue and will add to the security threat. At no point am I suggesting that the culprits should not be punished. 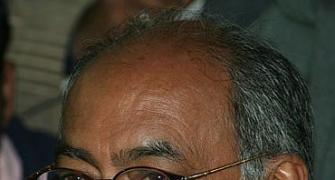 'RSS is worried, BJP is scared, Congress is confident' 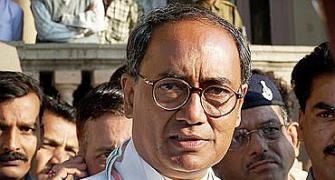 Those who called me a liar should apologise: Digvijay
I don't need BJP's certificate, says Digvijay 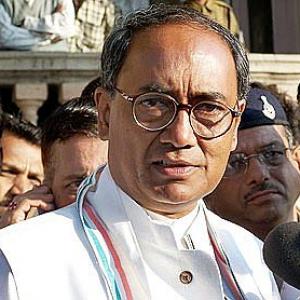 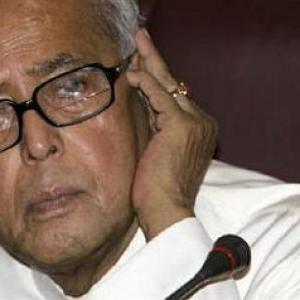