News
Business
Movies
Sports
Cricket
Get Ahead
Money Tips
Shopping
Sign in  |  Create a Rediffmail account
Rediff.com  » News » 'If anyone tries to bring pressure on me, they will face the music'

'If anyone tries to bring pressure on me, they will face the music'

December 10, 2010 13:10 IST
Retired Supreme Court judge Shivraj Patil has been requested to probe the allotment of spectrum policies since 2001, when the National Democratic Alliance was in power. He has been asked to complete his investigation in four weeks.

The judge will probe the appropriateness of procedures adopted by the Department of Telecommunications while issuing licences and allocation of spectrum between 2001 and 2009.

By announcing the probe into the 2G spectrum scam, which has already claimed the job of telecom minister Andimuthu Raja, the Union government may hope to silence intense criticism that it did nothing while a scam of gargantuan proportions -- the Comptroller and Auditor General estimates the loss to the exchequer from faulty telecom policies to at a whopping Rs 176,000 crores -- was being perpetrated.

Bengaluru-based Justice Patil, who has also served as chairperson of the National Human Rights Commission, will leave for New Delhi on Sunday.

In an interview with Rediff.com's Vicky Nanjappa, Justice Patil says he is glad to have been handed this responsibility, and warns that if anyone tries to pressurise or influence him during the course of duty, they will face the consequences.

How do you feel about your new assignment?

I am happy I have been asked to head this commission. It is an important issue and I will strive to the best of my ability to do my job.

A scam of such a magnitude, and the time given to complete it is just four weeks. Is it sufficient, Sir, in your view?

I am leaving for New Delhi on Sunday. I will go through the terms of reference of the commission. I will also need to see the volume of work that is before me once I reach New Delhi.

I hear it is four weeks and I will need to submit my report in that time. The issue is an important one and the government needs this report to come out in quick time.

I do not mind working overtime to finish it in the time allotted to me. However, I must assure that at no point of time will the quality of work suffer.

Commissions in India have this history of dragging on and on with extensions and so on.

I will do my best to ensure that it is completed in four weeks. time. I will need to examine the volume of work before me. However, if I am unable to complete it in the time given to me, I may seek an extension but be assured that it won't be too long.

The other question is about the seriousness of a commission of inquiry. More often, a commission submits its report and the government, at the Centre and in the states, sits on it and doesn't act upon it.

This has been the trend in many cases. Several commissions have been constituted in the past and the reports have never been tabled in either Parliament or the state assemblies. However, I feel differently towards this commission.

I have reasons to think that the government is serious about this commission. They wanted a one-man commission to head it and also want the report in four weeks' time.

I am sure the government is serious about this one.

Moreover, this is an important issue and the interest of the country is involved in this. Hence, I feel the government is serious about this commission.

You say that four weeks is good enough. Once again I would like to ask, how do you propose to complete it in four weeks' time?

This commission does not fall under the purview of a commission of inquiry. I am not expected to call for records and objections. These procedures are usually time-consuming. The issues pertaining to this scam are already before the CAG, the Public Accounts Committee and the Supreme Court.

My job is restricted to find out whether procedures have been followed or not and also to see if there have been any lapses.

I am not expected to record evidence, but am supposed to assess it.

In such an event, I would think four weeks are enough. The period that I am supposed to examine is between the years 2001 and 2009 and my endeavour would be to ensure that the whole process is completed early.

Looking at the magnitude of the scam, there is bound to be pressure. How will you cope with it?

Pressures do not mean anything to me. I have been a Supreme Court judge and have handled many pressure-packed cases in the past.

Pressures come to those on whom pressure can be brought upon. I have had no such instance in the past. So these pressures do not matter to me.

I will do what is before me and I have always believed that the only one who can put pressure on me is my conscience.

Hypothetically, sir, what would you do if anyone brings about pressure on you?

What is your view on the scams breaking out in the country and, in particular, the 2G scam?

I am afraid I will not be able to comment on that now. Today I am not just a citizen to make a comment. I head a commission which has to look into this issue and it would be unfair for me to pass a comment.

It would cause prejudice if I happen to pass a comment.

Let me inquire into the matter and give my findings.

ALSO READ:
Subramanian Swamy: 'A Raja did not take the whole money'
Arun Shourie: 'No one fears Sonia Gandhi'
India needs more of her PM than just integrity
The dark cabals that rule Delhi
View: Niira Radia did no wrong 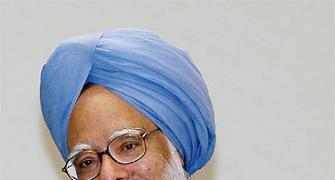 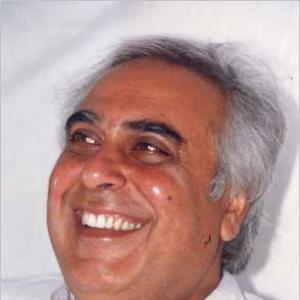