'The people are angry. They feel let down.' Sinha, the BJP member of the Lok Sabha from Patna Sahib, said on Saturday that while during then prime minister Atal Bihari Vajpayee's time there was lokshahi (democracy), what prevailed now was thanashahi (dictatorship).

Further rubbing his party the wrong way, the dissident BJP MP also said, 'If you keep suppressing facts, people will continue to say chowkidar chor hain (the watchman is a thief),' Sinha told the rally.

BJP leader and Bihar Deputy Chief Minister Sushil Kumar Modi said Sinha has 'fallen into bad company' and should quit the party if he was so unhappy in it.

"As for leaving the party, let the high command say it. I will leave at once," Sinha tells Subhash K Jha.

There is a lot of speculation about your political future. Would it be correct to say you are done with the BJP? Sushil Modi seems to think so...

Who is this Modi? I only know one Modi in the BJP. The real action hero, our prime minister, the honourable Narendra Modiji.

Who are these small fries to tell me what to do? Yeh bujhte hue diye itna phad-phada kyon rahe hain? (why are these dying lamps flickering so much?) Tell them to please find some other way to get publicity rather than by using my name.

As for leaving the party, let the high command say it. I will leave at once.

At Saturday's rally you all but declared Mamata Banerjee as the next prime minister.

She is certainly the perfect fit for the job. Look at her struggles and sacrifices for her state. She has risen from the grassroots and she cares for the poor and the underdogs.

Inaction has driven our current prime minister away from the masses. The people are angry. They feel let down.

So you see Mamata Banerjee as the next prime minister?

Yes, why not? Lekin abhi Dilli dur hai (Delhi is still far away). We need to focus on the current political crisis in our country. Which is what the gathbandhan (alliance) is trying to do.

You are being criticised by the BJP for not announcing your preferred candidate for prime minister.

Arrey wah, there are states where the candidate for chief minister has not been announced by them.

As the great Sohrab Modi said in the film Yahudi: Tumhara khoon khoon hamara khoon paani? (your blood alone is blood, mine is water?)

Woh karen toh raas leela, hum karen toh character dheela? (if they do it, it is divine love, if we do it it is loose character?)

This politics of double standards has brought the country to the brink of disaster.

So you admit you don't have a prime ministerial candidate?

On the contrary we have several potential prime ministers in our ranks whereas they have only one face and only one candidate.

Who are the political players you are planning to align yourself with?

Let the holy festival of Basant Panchami arrive, everything will be clear.

In the meanwhile everyone can see who my political allies are, be it Mamata Banerjee or Arvind Kejriwal. These are people with whom I share mutual respect.

For any political alliance to work, there should be respect within the ranks. 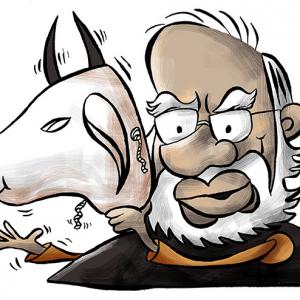