'When the Congress tied up with Chandrababu Naidu, they helped trigger Telangana pride.' 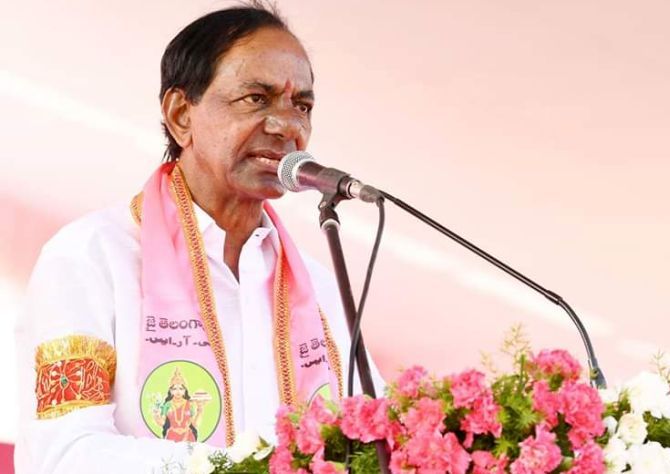 Taking a big risk and calling an assembly election six months ahead of schedule has paid off richly for K Chandrasekhar Rao and his party, the Telangana Rashtra Samithi, which is projected to win around 85 seats out of the 119 that went to the polls.

"It would have been much more difficult for KCR to win in this manner if assembly elections were held in 2019," Professor K Nageshwar, political analyst and former member of the Telangana legislative council, tells Syed Firdaus Ashraf/Rediff.com.

Why have Telangana voters given KCR such a landslide victory?

This is a positive vote for KCR. There is a general approval for KCR among Telangana voters.

When the Congress tied up with Chandrababu Naidu's Telugu Desam Party, they helped trigger Telangana pride.

Telangana's sentiment took centre stage and this contributed to the Congress's rout.

Did the Congress err by tying up with the TDP?

Joining hands with Naidu was not a mistake, but it played a very intense role in the campaign.

Naidu's involvement became counterproductive as the people of Telangana consider him the chief minister of Andhra Pradesh.

The Telangana movement was against the political dominance of Andhra; so, when Naidu came here and played a major role, this sent wrong signals to voters.

So, KCR's gamble of calling an election six months ahead of schedule paid off.

It paid off really well.

KCR was worried that 2019 would be a referendum on (Prime Minister Narendra Damodardas) Modi and, therefore, he called for early elections.

It would have been much more difficult for him to win in this manner if assembly elections were held in 2019.

I was expecting 70 plus seats and I said this on the day of the polling, but it has crossed that figure and that is a positive vote for KCR.

KCR must have done a lot of development work on the ground for such a huge victory.

Firstly, he launched many welfare schemes for the people.

Secondly, he had only one term as chief minister since the state of Telangana was formed. The people of Telangana felt he needs another chance to prove himself.

His role in agricultural reforms too has been very good which has benefited the farmers of Telangana. He has also given pensions to unmarried girls. These were good schemes. 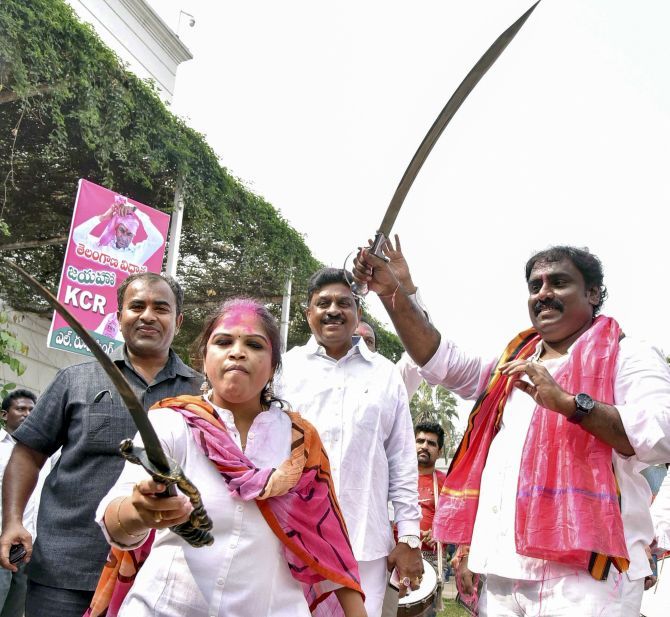 It was a no-show for the BJP in Telangana.

The BJP is unable to find any political space in Telangana. They are neither here nor there.

So, the people were unable to find a political space for the BJP.

Either you have to be in favour of the TRS or oppose the TRS.

If you are somewhere in between, then you are nowhere.

And there is a general decline of the BJP as other state results show.

What about KCR promoting family members in the TRS?

If family politics was not working, then the Congress would have lost elections long ago. For generations, the same family is ruling the Congress party.

What about allegations of corruption against KCR's family?

Corruption issue is always there. As long as corruption does not affect the common man, it does not matter. And who is not corrupt in Indian politics? You tell me.

If the Congress talks about corruption, then they talk as if they are a very honest party.

And when the Congress speaks of family rule in TRS, people laugh at them.

People only vote if they believe you. If they don't believe you, they will not vote for you.

What about the AIMIM (All India Majlis-e-Ittehadul Muslimeen)? It did well too.

They have retained most of their seven seats. It was expected.

The Congress could not make a dent in the AIMIM bastion. Why do you think it was so?

No mainstream party ever tried to penetrate the AIMIM bastion as they have an understanding with them.

The AIMIM cleverly exploits their strength from the mainstream political parties.

Does the AIMIM do any ground work? Or is it only polarisation of votes that helps the party to win?

They do the largest polarisation. People depend on the AIMIM for every damn thing -- be it a (water) tap or a house.

People are disempowered there (in Telangana's Muslim areas). They are desperate and, of course, communal polarisation adds to that. 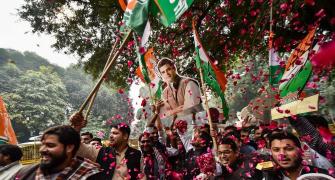 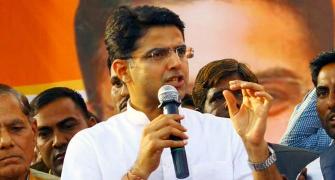 5-state battle: Who's leading and who's trailing 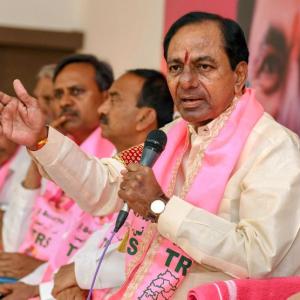 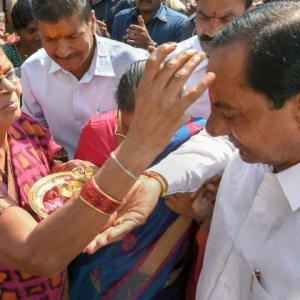