News
Business
Movies
Sports
Cricket
Get Ahead
Money Tips
Shopping
Sign in  |  Create a Rediffmail account
Rediff.com  » News » 'His statement is almost like him making a threat to the Supreme Court'

'It is a very irresponsible statement.'
'He is saying all the wrong things.' 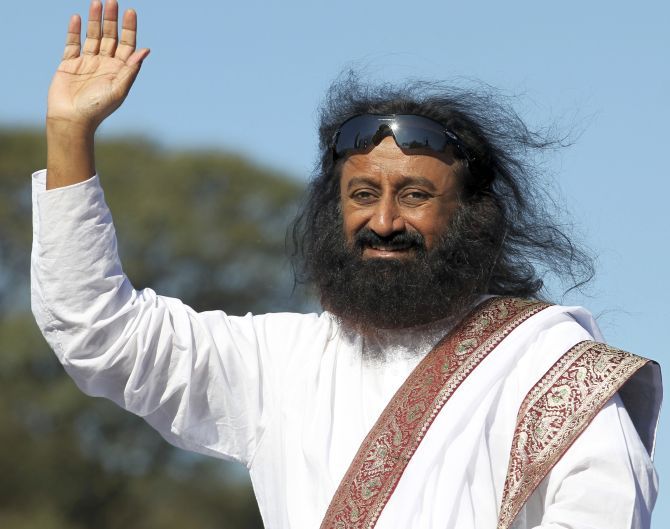 On Monday, March 5, speaking to a television news channel, Sri Sri Ravi Shankar -- the Art of Living founder -- shocked many when he declared, 'If the Ram mandir issue is not solved, we will have a Syria in India.'

Speaking to India Today TV, Ravi Shankar added: 'Muslims should give up their claim on Ayodhya as a goodwill gesture. Ayodhya is not place of faith for Muslims... We cannot make Lord Ram to be born in another place.'

While speaking to NDTV on the same issue, Ravi Shankar said, 'If the court rules against a temple, there will be bloodshed. Do you think the Hindu majority will allow it (ruling against a temple)? They will garner resentment towards the Muslim community.'

On Tuesday, Ravi Shankar followed up his efforts with an open letter addressed to All India Muslim Personal Law Board members urging them to consider an out-of-court settlement as he feared a 'large-scale' communal flare-up if the case was settled by the court or through legislation, Press Trust of India reported.

Sri Sri Ravi Shankar has warned that India can become like Syria if the Ram Mandir-Babri Masjid verdict goes in favour of any one party.

It is a very irresponsible statement. His statement is almost like him making a threat to the Supreme Court of India.

Don't you think if the Supreme Court pronounces a judgment in favour of one party, then the other party is bound to get upset?

That is the usual path of any judgment.

If everyone starts feeling this way, then there will be no litigation and courts in this country.

The (Allahabad) high court had given a judgment on the Ram Mandir-Babri Masjid issue in 2010 and there were no riots then.

But this will be a judgment passed by the Supreme Court, and hence final.

If all parties had not appealed in the Supreme Court, then the Allahabad high court's judgment would have been final. Nothing happened then.

Do you think mediation is a good thing?

These things do not happen in a hurry. I can understand this mediation happening after the Supreme Court of India's judgment. All the people will accept the apex court's judgment. Salman Husaini Nadwi, a senior cleric and sacked member of the All India Muslim Personal Law Board, spoke in favour of the construction of the Ram Mandir. Don't you feel there is a genuine feeling among Muslims that the Ram Mandir must be built at the disputed site?

This voice is coming only from 0.001 per cent (in the Muslim community).

If 10 to 20 people say such things, how does it make a difference?

Even 1 per cent of Muslims are not ready for this (Ram Mandir).

Don't you feel that Muslims must give up their claim to the Babri Masjid and a mandir must be constructed at Ayodhya as it will send a message of brotherhood in the country? This is what Sri Sri Ravi Shankar too is saying.

We do not have the right to do so Constitutionally and even legally too we cannot do this.

Isn't this what Sri Sri Ravi Shankar is saying, that many masjids have been shifted from their original place in other Muslim countries?

We have heard these arguments many times before and it is nothing new.

Sri Sri Ravi Shankar's talks are only a waste of time.

Do you think India will become a Syria as Sri Sri Ravi Shankar said?

If a full opportunity is given to hear all parties and after that a judgment is pronounced, then every party will abide by the law.

But if there is a hurried hearing on this issue and Muslims are not given a full opportunity to represent their case, then I don't know what will happen.

Somehow there is a feeling that only radical Muslim leaders are holding onto the Babri Masjid issue. The Muslim masses are not interested in where the masjid is constructed.

The best solution is that you do a survey in the Muslim localities of India on this issue.

I am giving an open invitation to anyone to do a survey in a Muslim locality on this issue and you will get the answer.

(Interrupts). Why are you wasting my time on what Sri Sri Ravi Shankar is saying? He is saying all the wrong things.