News
Business
Movies
Sports
Cricket
Get Ahead
Money Tips
Shopping
Sign in  |  Create a Rediffmail account
Rediff.com  » News » 'In 2024, Indians will boot out this government'

'In 2024, Indians will boot out this government'

'Let me assure the nation on behalf of the Sanyukt Kisan Morcha that our protests have not weakened at all or lost steam.' 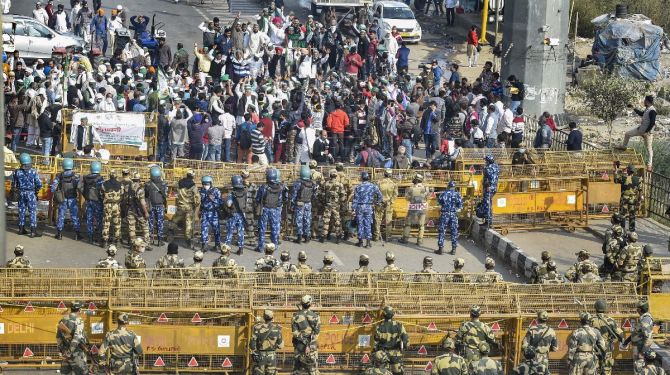 Shiv Kummar Kakka -- national president of the Rashtriya Kisan Mahasangh, a constituent of the Sanyukt Kisan Morcha, the umbrella organisation spearheading the farmers' protests against the three farm laws enacted by Prime Minister Narendra Damodardas Modi's government -- speaks with Prasanna D Zore/Rediff.com about the farmers's resolve after their eight-month long protest and why he thinks the government and the Opposition are engaged in the politics of adjustment.

What has the Kisan Sansad (Farmers' Parliament) at Jantar Mantar done since it had its first session on July 22, 2021?

We began the Kisan Sansad on July 22 and since then we have had a session of women farmers, in which women from all parts of India participated and debated the three black laws; the first five sessions dissected the APMC Act. After that we have been deliberating on the three black laws enacted by this government without listening to farmers' voices.

While this is a somewhat novel form of protest adopted by the farmers who are demanding repeal of the three farm laws, what purpose does it intend to serve in the interest of farmers?

The most important message we want to send to the people of India and this government is 'aap na toh kisano ki aawaz sunte hai; na unki haalat dekh sakte hai (your Parliament is not serving the interest of India's poor farmers).'

The most shocking aspect is that the Opposition and government did not care to even hold discussion on these three black laws in the last eight months. The Opposition is also mum about our demands.

We want to send home a message that our parliament is bigger than yours. And we are out there in the streets holding our parliamentary sessions since you didn't deem it necessary to call a special session of Parliament to debate and discuss the three black farm laws that will drive India's farmers to penury and slavery of corporates.

Farmers are conducting their debates exceptionally well demolishing all logic furnished by this government as to why and how these three laws will benefit farmers.

Our rulers should know that the road to Parliament passes through the streets and farms where we toil.

Have you invited anybody from the government or the Opposition to participate in farmers' parliamentary sessions?

We have not invited anybody. Everybody is coming to support us on their own. Three MPs from Kerala have joined us in the last few days. More elected representatives want to join us. You will see.

We don't want to make our parliament political. Support us from a distance and go back to your work in Parliament.

How are you dealing with the 200-people limit set by Delhi Lieutenant Governor Anil Baijal because of the COVID-19 pandemic?

We have not received any official letter yet (from Baijal about keeping the number of protesters limited to 200).

We are not worried about Covid. We have been sitting around Delhi for more than eight months now and none of our farmer brother or sister has died due to COVID.

We have got nothing to do with what the lieutenant governor says or has imposed about number of people who could attend the Kisan Sansad. We wanted to bring 100,000 people at Janar-Mantar every day.

The Delhi administration has been pleading to keep the number of people coming to join our protests at the minimal. Since gathering large crowds here could lead to problems for the law and administration officials we also didn't want to take that risk. We don't want outside elements to do what they did during the January 26 tractor rally.

We have voluntarily decided to keep the number of protestors limited to 200 every day.

The farmers' protest against the three farm laws seems to have lost momentum for some time now. What's the reason behind this agitation losing steam?

We may not have been in the limelight as there was no news about our peaceful protests in newspapers or on TV channels.

And what does the government need to recheck?

When the COVID-19 pandemic assumed dangerous proportions we had called an emergency meeting of the Sanyukt Kisan Morcha. We realised that the nation was going through a rough time and we didn't want the government to blame it on us. The nation would have taken us to task (had we continued with our aggressive protests).

The nation has already taken this government to task over the mishandling of the Kumbh Mela and West Bengal election. We were not worried about how the government would stigmatise our agitation taking advantage of COVID-19, but we are worried about our people.

Thinking this through thoroughly, we decided to continue our protests at the Singhu border and other border areas around Delhi by strictly following COVID-19 protocols of maintaining safe distance and restrict our movement. The farmers of this country were with the people of India at that time.

While we did continue our protests the media focus shifted, and rightly so, to counting dead bodies across crematoriums and the Ganga.

The media was busy exposing the government's mishandling of the COVID-19 pandemic by highlighting the dead bodies floating along the Ganga, buried along its shores and burning in its crematoria.

The media was exposing the scarcity of oxygen cylinders, ICU beds, which at that time were bigger stories for the nation to know than what was happening at farmers' protest sites. That did sideline media coverage of our protests, but we are more than happy about it.

But there are some sections of our society and media who are quietly wishing that the farmers' protest would die a silent death and we can't do much about that.

Let me assure the nation on behalf of the Sanyukt Kisan Morcha that our protests have not weakened at all or lost steam.

You must appreciate that not a single person died due to Corona during our protests. There was a controversy over the death of one farmer when a doctor declared COVID-19 as the reason of his death, but when we got his post mortem done it became clear that he died of cardiac arrest.

Despite the eight-month long protest, which is still continuing, the Modi government is still observing a wait and watch policy. Has that weakened the resolve of the farmers?

Kisan ka manobal bohot mazboot ho raha hai (Our resolve is only strengthening with each passing day). Three days ago we did a press conference in UP and prepared our programme for Mission UP, Mission Uttarakhand, and Mission Punjab. We already successfully launched our movement in West Bengal and now time has come to take it to other states.

We have chalked farmers' protest plans till 2024. In 2024, Indians will boot out this government.

What could be the reasons why the Opposition is not raising farmers' demand aggressively? Rahul Gandhi even tried to ride a tractor to Parliament to highlight the cause of farmers.

Is the Opposition paying only lip service so far as the farmers' demands related to the three farm laws are concerned?

Is the Sanyukt Kisan Morcha planning any protests on August 15?

There is no big plan. We will be hoisting the Tricolour at our tents wherever we are located.

If someone says farmers will be organising protests on August 15 then that should not be considered as the official position of the Sanyukt Kisan Morcha. Whatever we decide at the meeting of our topmost committees we share it with the nation through a press conference on the same day. 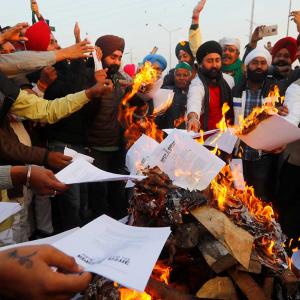