'Vice Presidential Election Was Not Fair!'

'Parties which supported me were all threatened. This could hardly have been called a fair election.'
'This is Modi's India.' Veteran Congress leader Margaret Alva may have entered politics by accident way back in 1974, but she is not afraid of putting up a brave fight.

She has done so throughout her long innings in politics. She did so most recently when she put her hat into the ring to fight the collective might of the Bharatiya Janata Party-led National Democratic Alliance when she agreed to be the vice presidential candidate for the Opposition combine.

Looking back at this unequal battle, Alva has her own take as to why she was defeated by Jagdeep Dhankar, now India's vice president.

Speaking exclusively to Rediff.com Senior Contributor Rashme Sehgal, Alva maintains that given her close relationship with leaders across all political formations there was no way that they would not have supported her candidature.

"I had expected the support of 21 political parties. These included the Trinamool Congress, the Biju Janata Dal, the Janata Dal-United and the YSR Congress.

"My relationship with leaders of all these four parties has been very good and we have remained good friends. My ties with Mamata (Banerjee, West Bengal chief minister and Trinamool supremo) go back several decades when she was a member of the Congress party.

"But I understand that during the course of the three-hour long meeting that she had in Darjeeling on July 13 along with Assam Chief Minister Hemant Biswa Sarma and (then West Bengal governor) Jagdeep Dhankar, she was warned that there would be serious repercussions if she voted for me.

"I am not saying it. It was there in all the papers," says Alva.

"It was the same with Jaganmohan Reddy who is a Christian like me. I have been very close to his father Rajasekhar Reddy (the late chief minister of Andhra Pradesh) but we all know that the CBI is after Jagan, so he had no choice but to toe the line," alleges Alva.

Alva's ties with (Odisha Chief Minister and BJD supremo) Naveen Patnaik also go back several decades given that she had great admiration for his late father Biju Patnaik.

"When I rang up Naveen, he informed me that he would have been happy to support my candidature, but I had contacted him too late as he had already come out in support of Droupadi Murmu," she discloses.

"I understand that (Delhi Chief Minister Arvind) Kejriwal had also been received similar warnings, but he came out in support of me," says Alva.

Alva had been hoping that Bihar Chief Minister Nitish Kumar and his JD-U would have supported her. That didn't happen.

Three days after the vice presidential election, Nitish Kumar walked out of his alliance with the Bharatiya Janata Party in Bihar. "I wish he had done so earlier," Alva says wryly. "The question to be asked is how fair were these elections?

"The leaders of practically all the political parties in the NDA received threats and warnings. All this has happened before the entire country.

"The Shiv Sena came out in support of me, but they too received multiple warnings. Parwhich supported me were all threatened.

"This could hardly have been called a fair election. This is Modi's India," Alva says, distress written across her voice.

"With my long years of experience in Parliament, having served four terms in the Rajya Sabha and one term in the Lok Sabha before going on to become governor of Rajasthan, Goa and then Uttarakhand, people were aware of my track record.

"I would have been committed (if elected) to forging a consensus on all matters of crucial importance in contrast to the way Parliament is functioning today.

"I fought the battle as best as I could. This is the essence of politics," she says. IMAGE: Margaret Alva gives the victory sign during the filing of her nomination papers.

The leadership issue of who will lead the Opposition parties for the 2024 Lok Sabha elections remains wide open with Bihar CM Nitish Kumar having recently visited Delhi to hold deliberations with leaders across several parties.

Did she see Nitish Kumar as becoming the face of the Opposition for the 2024 general election? Equally important, who did she see as leading the Congress party?

Alva chose to sidestep these question with a rather ambiguous reply.

"There is no other party except the Congress with a strong all India presence at the grassroot level. Go to any rural part of the country and see the number of Congress workers across all strata of society.

"When I travel across the rural parts of Karnataka and Tamil Nadu, I witness this all the time. People will come to attend these meetings carrying food and other items. They have so much goodwill towards us.

"Nor am I going into the question of who will emerge as the leader of the Congress. When the time comes, the leader will emerge. Till then there will be many twists and turns.

"We witnessed this following the death of Rajiv Gandhi. P V Narasimha Rao emerged and he proved a very capable leader. Many questions were being asked in 2004 when Dr Manmohan Singh was selected and he also did an excellent job," says Alva. What did she think of the way minorities are being treated given that she herself belongs to a minority community?

"It is very scary. Nobody is reporting on the number of churches that have been burnt down or how many homes belonging to Muslims have been demolished because people had gathered inside a home to do namaaz.

"By closing down meat shops, thousands of Muslims have lost their means of livelihood. But nowhere is the fact that the largest number of meat exporters in the country are Hindus being highlighted," she says, maintaining that Dalits, Muslims and Christians have been at the receiving end of the majoritarian politics embraced by the current regime.

In her memoir Courage and Commitment, Alva criticised Indira Gandhi for imposing the Emergency. "But even during that period," she recalls, "communication channels to meet Indira Gandhi were always open. We could meet her and voice our criticism of what was going on."

"She had the courage to remove the Emergency and call for elections in which both she and Sanjay Gandhi lost.

"Today there is an undeclared Emergency and no one can communicate with Modi." 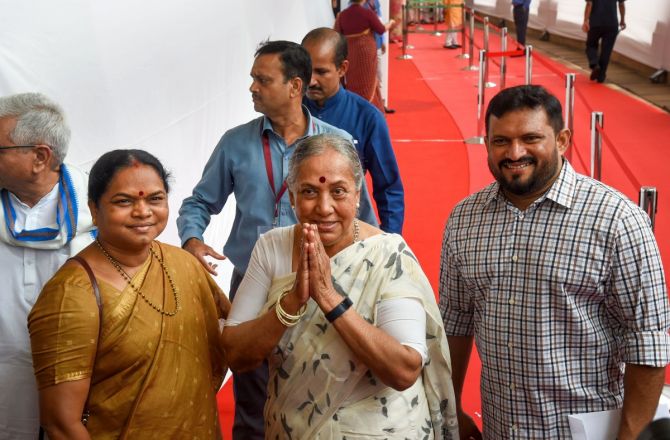 In 1977, when Karnataka Congress leader Devraj Urs was expelled from the party, Alva chose to leave the Congress with him as did several other state leaders.

"I went on to be elected to the Rajya Sabha with the support of the Opposition parties including the CPI-M. Mrs Indira Gandhi wrote me a letter of congratulations telling me how sad she had felt with my decision to leave the Congress."

Alva rejoined the Congress subsequently and went on to be appointed minister of women and child welfare under then prime minister Rajiv Gandhi who won a landslide majority in the December 1984 general election.

"I somehow managed to enter Rashtrapati Bhavan and found a seat right at the back when Arun Nehru came up to me and said, 'What are you doing here? Your name is on the list.'

"It was then that I realised I was being made a minister. Politics then was so informal. We were like one family.

"We would argue with Rajiv, differ with him; he would joke with us...so different from what it is today. There was so much friendship across all parties." 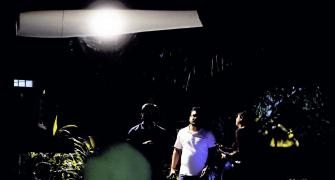 Does India Need Another Freedom Struggle? 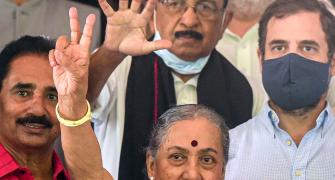 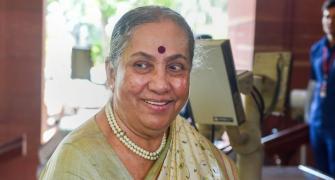