News
Business
Movies
Sports
Cricket
Get Ahead
Money Tips
Shopping
Sign in  |  Create a Rediffmail account
Rediff.com  » News » COVID-19: 'We should not drop our guard thinking the vaccine is coming'

COVID-19: 'We should not drop our guard thinking the vaccine is coming'

'If we take such an approach, we may find ourselves in a tough situation.'
'COVID-19 doesn't spread through water or air or mosquito; it only spreads from person to person.'
'We should make wearing a mask as part of our life.' 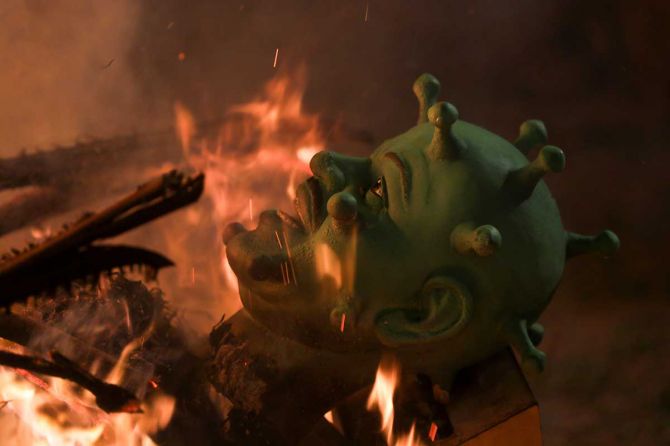 IMAGE: An effigy representing the coronavirus disease burns after it was set on fire on New Year's Day in Mumbai, January 1, 2021. Photograph: Francis Mascarenhas/ Reuters

The scientists in the UK have found a mutant variety of the novel coronavirus which is 70% more contagious than the one that was prevalent before.

A different strain of the virus, again more contagious was found in South Africa also.

Does that mean the virus is mutating to conquer human beings even when vaccination has started in a big way in some countries like the UK, US, Latin America, etc?

In June 2020, scientists at the Centre for Cellular and Molecular Biology at Hyderabad led by its Director, Dr Rakesh Mishra had found a new strain of the novel coronavirus, Clade A3i that infected around 41% of the cases in India at that time.

Dr Mishra discusses the new mutant virus and why it is mutating so fast with Shobha Warrier/Rediff.com.

Mutation is a normal biological process for all living things to create variety and thereby increase their chances of survival and propagation.

This is the law of life and fundamental principle of evolution.

We are all different because at some point, our ancestors have accumulated mutations which are viable and beneficial.

When a copy of the genetic material is made, errors are also introduced.

This error in certain species like humans or complex organisms is largely corrected by proof reading mechanisms, so our error rate is very low.

But in the viruses, there is no proof reading of the error, so more errors are made.

Because every time an error is made in the genetic copy, and it's not corrected, a number of variations are produced all the time.

Since viruses are very large in numbers, they can afford such error prone system.

If a virus somehow acquires a property by which it can infect faster, it will increase chances of survival in the host.

Survival of the fittest?

Yes, survival of the fittest.

In this case, the fittest infect more people, and at a faster rate.

That's the way to survive for the virus.

It is very normal that whenever a new variant emerges, it spreads faster.

The others that don't have this ability will not be detected as they don't make much headway.

Remember we had identified the Clade A3i in India.

It had some defect in it and its replication was thought to be slower.

That's why after a few months, A3i was completely replaced by A2a.

It could have survived if there was no other stronger strain.

But A2a was faster and A3i was slower; so slowly it got eliminated completely. 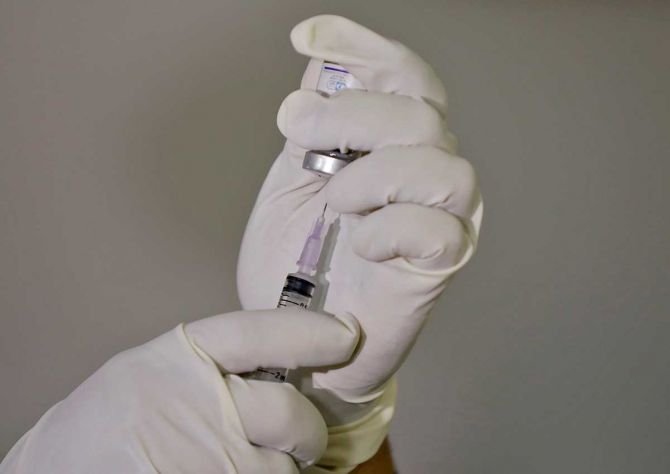 IMAGE: A paramedic fills a syringe with a vaccine against the COVID-19 before administering it to a health worker during its trials at the Civil Hospital in Ahmedabad, January 5, 2021. Photograph: Amit Dave/ Reuters

No. When I say, environment, I am talking about the human system.

In India also, there may a large number of variations going around.

Out of the >4000 genomes India has sequenced, there are several thousand mutations that we have catalogued.

Since they are of no consequence, they don't make much difference.

We are also doing genome sequencing in our lab, and many other labs in India.

In a few days, we will know whether the UK variant or any other new variant is in India or not.

The mutation is not intentional or engineered; it is a random process.

Most of the mutations do not make any difference.

Gradually you will see more and more variants appearing which may be equal in infectivity or even better, like the new strain.

In this case, the virus is more infectious. Otherwise, it is just the same.

We now see a more powerful second wave happening in the UK, many European countries, Canada, etc.
Has it anything to do with the virus mutating to more infectious forms?

Mutation also has contributed because if the mutant variety is more infectious, it spreads faster.

You have to also realise that an infection is not one-way traffic.

As viruses cannot fly more than 1 or 2 metres; people's contribution is also needed in infections.

People are moving around without any protection and spreading the virus.

So, it all depends on the behaviour of the people.

Of course, the virus will do its bit by making it more efficient.

In the UK and Europe, people are partying more and because of the winter, they are working in close doors, thus helping the virus spread faster.

The spread of the virus depends equally on human behaviour also. 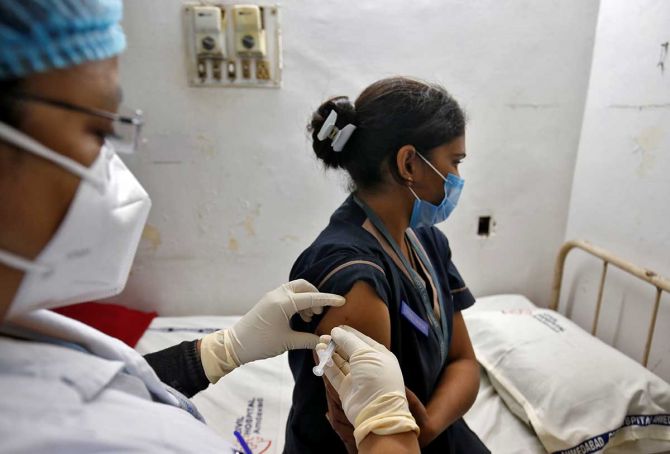 IMAGE: A paramedic administers a vaccine to a health worker during its trials at Civil Hospital in Ahmedabad, January 5, 2021. Photograph: Amit Dave/ Reuters

Many experts say India is still experiencing the first wave, and the chances of a second wave coming is less.
Do you think so?

I don't think India is still in the first wave.

Many waves have come and gone.

For example, in Delhi, they had even officially announced a second wave.

How will you find there is a wave?

Only when you test large number of people.

When you test more people, you will know that there are more infections.

Now, we are not testing enough.

Whatever testing we are doing, we are using the Rapid Antigen method to a great extent which is only 50%-60% sensitive.

It means, while we are testing we are also missing large numbers as false negatives.

If the same test was done with RT-PCR, we would have found 30-40% more cases.

Then, we would have been able to figure out waves more accurately.

So, it all depends on how good your system is in recording testing, and conducting sufficient number of testing.

If positivity is less than 5%, then, you can say you are testing enough.

That's why the data available from many cities is not good.

Another thing is, India will not have a single wave at the country level.

There is nothing called a single wave or a national wave in India.

We see a large number of multiple waves happening in different parts of the country.

We have to be more local, and that's the more effective way of tackling the problem.

That is because people's behaviour in each part of the country, population density, other conditions etc. are is different.

We cannot use the same parameter which smaller countries use to depict a wave as they are more homogeneous in nature.

On the other hand, India is likely to have multiple waves in multiple regions.

Can we say the worst is over in India?

I wish I could say the worst is over!

I don't see any reason to say the worst is over.

At present, India has the second largest number of infected people in the world.

It means we have a huge reservoir of virus in the country.

It also means a new variant can emerge here.

Unless data is generated, we do not know how many people have antibodies in their immune system.

I feel we should generate more data on sero-positivity.

Only then, we will be able to say a large number of people have developed immunity and there will be like a speed breaker for the virus.

Even then, a new variant can emerge and infect people with more vigour.

So, I will say, we have to be more cautious and careful, and take a lesson from the new UK strain.

We should not drop our guard thinking the vaccine is coming, and the worst is over.

If we take such an approach, we may find ourselves in a tough situation.

Whether it is a new variant or the old variant, the method of spreading for this virus is the same; person to person.

It doesn't spread through water or air or mosquito; it only spreads from person to person.

We should make wearing a mask as part of our life.

We should wear the mask like we wear the shirt or the shoe.

We should consider it as our civic duty or social responsibility to wear a mask. 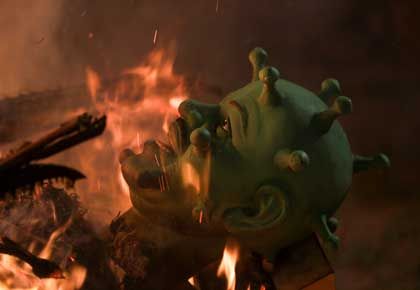 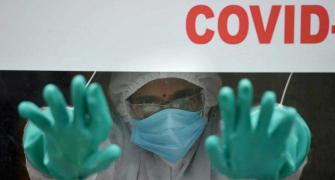 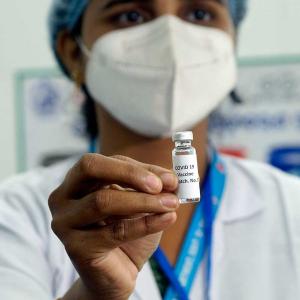 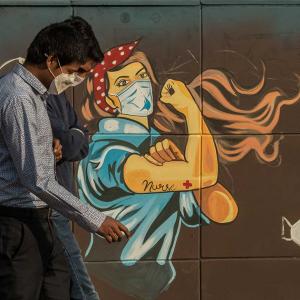