'Given that the globally most prevalent clade of SARS-CoV-2 is also predominant in India, any vaccine or drug that gets developed in the world should also prove effective in India' 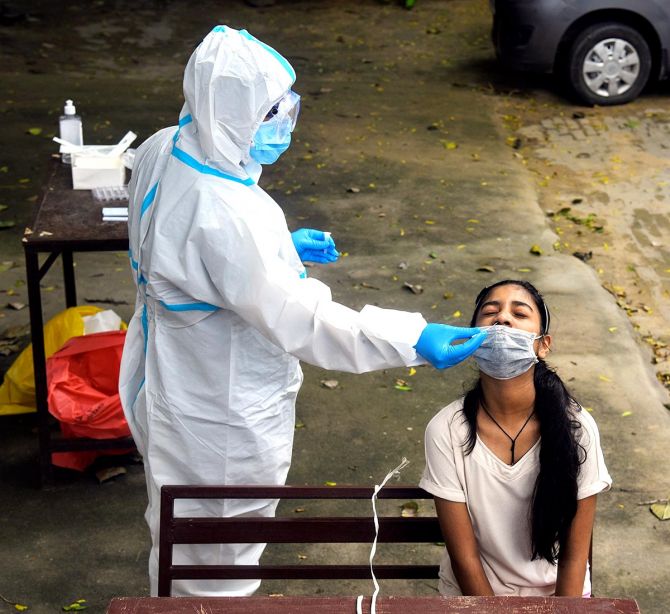 Geneticists from Delhi's Council of Scientific and Industrial Research-Institute of Genomics and Integrative Biology, Vinod Scaria and Bani Jolly, tell Abhishek Waghmare how they are tracking the evolution of SARS-CoV-2, also known as the novel coronavirus, in India.

What is a phylogeny study? How would you explain the evolution of SARS-CoV-2?

As the virus mutates and evolves, its genetic structure changes, and the relation between these different SARS-CoV-2 genomes can be represented via a 'phylogenetic tree', akin to the family tree of the virus.

Do you find different variants of the virus, then?

Slight changes in the genetic structure of the virus does not change the strain, but alters only a few characteristics.

The group of genomes who share common mutations form a 'clade', akin to a family.

The phylogenetic study helps in tracking the disease outbreak by identifying the diversity of the virus and determining how the virus has travelled around the world.

What are the primary insights from the study?

As against 10 globally prevalent clades of SARS-CoV-2, seven 'families' of this coronavirus have been observed in India: and they are named A1a, A2a, A3, B, B1 and B4, and I/A3i.

The predominant clade A2a, which possibly originated in Europe, is seen in 60 per cent of the spread in India.

This variant is defined by a mutation in the spike protein of the virus, a protein that has been shown to be responsible for aiding the virus in infecting a host body.

Is there any 'clade' or family that is unique to India?

Yes, the I/A3i did not classify under any of the 10 previously labelled clades, and was the second-largest set of SARS-CoV-2 genomes found in India.

It is present in a distinctly large proportion in India (a fourth of the samples), with limited representation outside the country.

There seem to be two variants dominant in India, then. How different are they?

For the dominant family A2a, we found that there are multiple points of introduction of the infection -- the infections can originate in different places at the same time -- followed by the subsequent spread to other regions.

However, the transmission pattern of the clade I/A3i suggests that the clade diverged from a single point (or a few points), then spread to other regions, possibly as the result of a large outbreak event.

Would this study help us arrest the spread of COVID-19 in India?

Mutations in genomes helps us do 'molecular contact tracing', or tracing the spread of the virus based on the mutations that it has accumulated while jumping from one human to the other.

Thus, the identification of clades is important from a public health point of view.

If a large number of genomes is made available in India, the information gained from documented cases of infection in the country can be used to uncover undocumented sources of infection, which can be quarantined to prevent the recurrent spread of the disease.

Can this study help in vaccine development?

Looks possible. Given that the study has shown that the globally most prevalent clade of SARS-CoV-2 is also predominant in India, any vaccine or drug that gets developed in the world should also prove effective in India.