News
Business
Movies
Sports
Cricket
Get Ahead
Money Tips
Shopping
Sign in  |  Create a Rediffmail account
Rediff.com  » News » 'China, like US, is not dependable and trustworthy'

'Only when China treats India as an equal can we consider them real friends.' "The 'unequalness' in the India-China relationship is partly due to our conduct. We are not vision-driven like China," Colonel R Hariharan, an associate with the Chennai Centre for China Studies, tells Rediff.com's Shobha Warrier.

What impact will the informal meeting have on the India-China relationship?

If I were to rate the meeting, I will give it 3/5. The meeting was cordial. Both leaders met in a friendly atmosphere and discussed long term strategic issues of global and regional importance.

The informal meet was able to repair the slightly fractured relationship after China's conduct at the UN security council in support of Pakistan after India abolished Article 370.

After Imran Khan met Xi in China on October 9, Xi said China would continue to firmly support Pakistan on issues concerning its core interests and of major concern to it.

This is the first time Xi has used the term 'core interests' in relation to Pakistan.

China has made contrarian statements on the Kashmir issue, not only now but in the past also. It has said it should be settled bilaterally as also settling through the UN etc.

But this time, before the informal summit, India took pains to explain to China that abolishing of Article 370 was an internal matter, related to amending the Constitution.

After this explanation, China went to the UN security council to help Pakistan out, though no resolution on Kashmir was brought as it could not muster adequate support.

That itself showed China was favouring Pakistan on Kashmir. After that the Chinese ambassador in Pakistan made a very serious statement in support of Pakistan.

Xi's use of the term 'core interest' shows China has taken a position to support Pakistan.

India, unhappy with the development, had sent another strong signal by participating in the ministerial level meeting of the US, Australia, Japan and India to formalise the Quadrilateral alliance, which had been a loose network to formulate collective strategies in the Indo-Pacific.

These developments sent negative vibes before the meeting, just like what happened after the Doklam standoff before the Wuhan meeting. The external affairs ministry in a statement said Kashmir was an internal matter and India would not like any external interference.

So Xi probably thought Modi might bring it up Kashmir issue at the informal summit.

Do you feel Modi deciding not to raise the Kashmir issue is to India's credit?

Modi did the right thing by not raising the Kashmir issue after maintaining it was an internal issue. And the comfort level for Xi increased when Modi did not raise the issue.

So, you can say India while being firm, took a number of measures to improve the comfort level between the two leaders.

China noticed the signals. The mood of the leaders at the meeting was quite good, enabling them to cordially discuss larger issues.

It seems trade and trade deficit dominated the summit. Does that mean Modi and Xi considered trade as the most important issue to discuss?

I will view it slightly differently. The same subject came up at Wuhan also. After the Wuhan meeting China agreed to India's export of sugar and non-Basmati rice.

In the current year, our exports to China have slightly gone up though still (it is) low. Imports have also come down.

Perhaps encouraged by this, the two sides discussed trade issues and agreed to setting up a high level mechanism headed by Finance Minister Nirmala Sitharaman and Chinese Vice Premier Hu Chunhua to look in detail at trade, investment and services. So, there is hope that there would be positive gains.

Against the background of the US-China trade war, would China be looking at India as a huge market? Would India also want to have a share in the huge Chinese market?

Exactly. The problem is China restricts imports from India. For example, in the pharmaceutical industry, though India imports organic chemicals for manufacture of drugs from China, China does not allow the import of Indian drugs.

India has been negotiating hard on the terms as it could result in Chinese imports going up. This issue also came up at the summit.

There was a lot of emphasis on trade. There was an effort on India's part to create a congenial atmosphere to take these issues forward. Issuing long term visas for the Chinese is one such effort.

Chinese tourists are not coming in large numbers to India unlike Sri Lanka where they top the number of foreign tourists. There is a great opportunity for India in promoting tourism. Personally, I am of the opinion that no nation should trust any other nation 100%.

In the case of China, it has more meaning. India has very close defence relations with both France and Russia and both have proved they are dependable. Though Russia has sold weapons and France sold submarines to Pakistan, we can trust them.

But China, like the US, is not dependable and trustworthy.

China is brazenly self-centred. China is probably the only country which has gone to war with almost all of its neighbours over border disputes.

China has been investing heavily in all of India's neighbours. Is it to isolate India?

Chinese investment in our neighbouring countries serves China in two ways: It furthers China's quest to become a global power. At the same time, it can strategically contain India, which is a potential challenger to China in Asia because of its size and growing economic power.

It is not easy to isolate India which dominates the sea lanes of communication in the Indian Ocean. China has developed a blue water navy to protect its maritime trade as China is a very big importer of petroleum and other mineral resources.

How much will such informal summits help build a better relationship between India and China?

The advantage of an informal meeting is you do not have to come out with a joint statement.

Though they say there was no fixed agenda, the ministers accompanied them shows they have an agenda. It is not a formalised agenda, but a free-flowing one. So this creates a friendly atmosphere, to further the understanding of each other.

The body language of both leaders showed that they were quite comfortable with each other...

These meetings were both formal and informal, summits as well as on the sidelines of international conferences. So, they seem to have built a rapport and appear to be quite comfortable with each other.

Can India and China ever be true friends?

Only when China treats India as an equal can we consider them real friends.

Unfortunately, the Chinese try to equate themselves with the Americans. The 'unequalness' in the India-China relationship is partly due to our conduct too. We are not vision-driven like China.

Also, China is a highly materialistic, Confucius-driven, society where the ruler is accepted as all powerful. So they are able to realise their vision better.

Yes, we are two different systems, but we have to co-exist. Like Vajpayee said, you can choose your friends, not your neighbours. 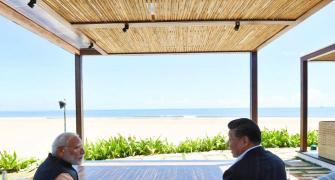 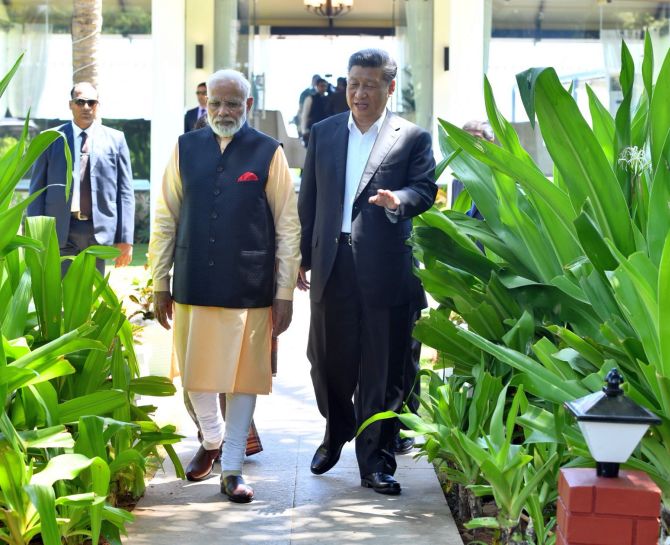