'According to politicians, farmers are the fourth grade citizens of India.'
'We farmers could meet the prime minister and ministers during Congress rule.'
'But none of the BJP ministers want to even meet us.'
'The prime minister has time only for foreigners, but has no time to meet us farmers.' P Ayyakannu grabbed national attention when he, along with many farmers from Tamil Nadu, staged a prolonged protest at Jantar Mantar, New Delhi.

While the political parties were disappointed with the Supreme Court judgment on the Cauvery water, you remarked that the farmers are happy and satisfied. Why?

The Cauvery tribunal was appointed in 1990. In 1991, the tribunal pronounced an interim order that Karnataka should release 205tmcft of water to Tamil Nadu.

28 years have passed, but Karnataka has not fulfilled the tribunal order, which is equal to the Supreme Court judgment.

In 2007, the Cauvery tribunal passed the final order and asked Karnataka to release 195tmcft of water to Tamil Nadu. But Karnataka has not followed the order.

In the last 11 years, they have released only 100tmcft of water.

In June and July last year, they did not release any water at all.

What I want to reiterate is that all judgments are only on paper.

In the last 28 years, we have suffered a lot. We used to cultivate three crops in the Cauvery delta before 1974, but we have not been able to cultivate a single crop this year.

For this, we have borrowed money from banks, but have not been able to repay the loan due to lack of water.

Then the bankers came to the house of the farmers and said, 'You have money to buy saris for your wife and dhotis for yourself, but no money to repay the loan.'

That was why we decided to protest without a dhoti and shirt in Delhi. Why do you feel you will get water now because of the Supreme Court judgment?

Because of two reasons.

One, the Supreme Court said that Karnataka was not the sole proprietor of the Cauvery water; the river belonged to all and nobody could claim its ownership.

Then, the Supreme Court asked the Centre to constitute a Cauvery management board and a regulatory board within six weeks.

If the central government fails to do so, we can file a contempt of court petition against the prime minister of India and the chief minister of Karnataka.

Even though the Supreme Court has reduced the quantum of water to 172.25 tmcft from 192tmcft, we are happy because we did not get the amount of water the tribunal asked Karnataka to release in the last 28 years.

They released water only when there were floods there.

Karnataka was using Tamil Nadu as a drainage till now.

According to the 1892 agreement, Karnataka (then Mysore state) could cultivate only 90,000 acres. It also said it should not construct any dam.

But in 1910, they were allowed to construct the Krishna Raja Sagara dam in Kannambadi. Tamil Nadu constructed the Mettur dam, but Karnataka (then Mysore state) was allowed to use Cauvery water only for 590,000 acres of land.

Tamil Nadu can cultivate 24.89 lakh (2.489 million) acres of land using Cauvery water, but how much are we doing?

Another aspect in the landmark judgment is the Supreme Court asked Karnataka to adhere to a monthly quota.

In a federal state, in the case of any state government refusing to obey the orders of the Supreme Court, the central government can dismiss the state government under Article 356 of the Constitution and impose President's rule.

We are happy that the Supreme Court has given such an instruction to the central government.

We can file a writ petition if they do not follow the Supreme Court's orders by not constituting the Cauvery management board within six weeks.

How do you think the Cauvery management board, which the Supreme Court has asked the Centre to constitute, will help Tamil Nadu's farmers?

When the Cauvery management board is formed, the CPWD (central public works department) and other secretaries from the central government have to come and calculate the area of land in which Karnataka can cultivate, which is 18.85 lakh acres of land.

The board also will see to it that water is released every month to Tamil Nadu.

Politicians in Tamil Nadu say they are disappointed with the judgment...

But we farmers are not disappointed. In fact, we are happy and satisfied.

Do you think the Cauvery water dispute between Tamil Nadu and Karnataka will end after the Supreme Court judgment?

We believe that the Constitution is the supreme authority in India.

We believe in the federal structure of our country.

We also believe in the Supreme Court judgment.

So, we are sure that the Cauvery water dispute will end with this judgment.

As the person who led the farmers protest in Delhi, are you happy with the 150% increase in the MSP announced in Budget 2018?

It was in 2006 that Professor M S Swaminathan submitted the report recommending a 50% rise in MSP.

In 2014, Narendra Modi announced that if he became the prime minister, he would give a profitable price for agricultural products, and that he would interlink all the rivers in India.

But he had forgotten these promises in the last four years. He remembered them only before the next elections.

When they should have allotted Rs 24.42 lakh crores for farmers in the Budget, the finance minister has allotted just Rs 40,000 crores.

Farmers form 70% of the population but in the Budget, we have been allotted only one-and-a-half percent.

Has it not been the case irrespective of whether the Congress or BJP ruled the country?

According to politicians, we are only the fourth grade citizens of India.

The difference between the Congress and BJP is that we farmers could meet the prime minister and concerned ministers during Congress rule.

But none of the BJP ministers want to even meet us.

The prime minister has time only for foreigners, but has no time to meet us farmers.

While experts are against inter-linking of rivers, you say it is a good idea. Why?

According to me, inter-linking of all rivers is a good idea.

As per the report submitted by the water resource department, the Mahanadi, Krishna and Godavari can be linked.

They can also link the Brahmaputra and Ganga with the Mahanadi.

If the flood water is diverted to south India during the floods, it will be a win-win situation for them and also for us.

(Union Minister) Nitin Gadkari has announced he will link the Mahanadi, Krishna, Godavari and Cauvery and we believe he will do it.

When it happens, it will be a boon for all farmers. 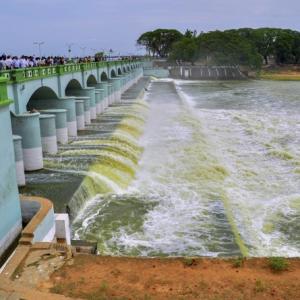