'Today you have 30 to 40 per cent of bureaucrats who are not parrots of the government, but what happens if you change the system?'
'If implemented, this can disrupt the system, which will have more adverse consequences than demonetisation.' 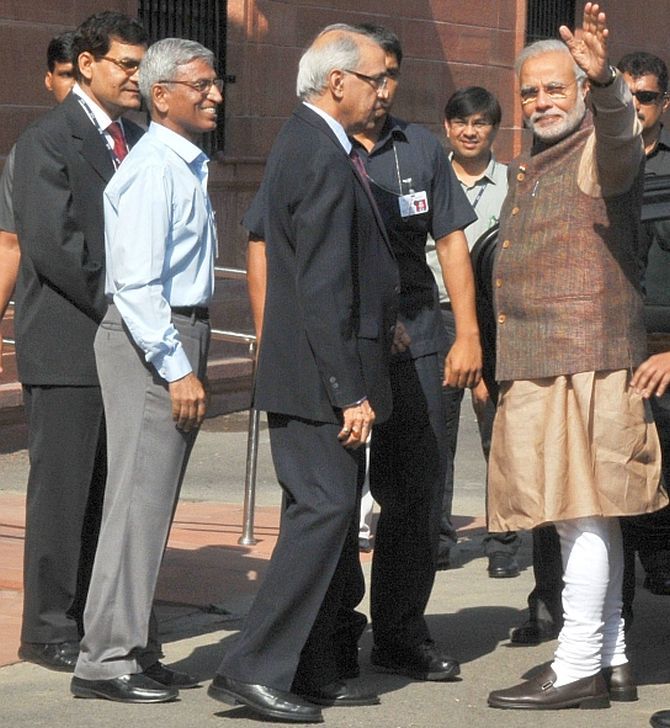 The Narendra D Modi government's proposal to change the rules for allocating services and state cadre to candidates who have cleared the civil services exams conducted by the Union Public Services Commission has kicked up a controversy.

According to the proposed changes, the cadre and service will be allocated after the new civil servants complete their three-month foundation course -- and not before, as is the current practice.

Critics believe the new proposal is ill-conceived. Dr Arvind Mayaram, the former finance secretary, who has been vocal in his criticism on social media, tells Rediff.com/Syed Firdaus Ashraf why the current system is well thought out and one which serves the nation well.

"If implemented, this can disrupt the system, which will have more adverse consequences than demonetisation," warns Dr Mayaram.

What exactly is the government intending to do with the UPSC examinations?

The framers of the Indian Constitution realised that in a country as diverse and disparate as India, where there is so much backwardness and asymmetry between states, there are pressures of linguistic politics, castes and religion.

There are regional identities too, and therefore, it was necessary to create a bureaucracy in a manner which would have a pan-India perspective and not a parochial perspective.

Also, the bureaucracy would have a fairly high degree of independence so that they could provide the right kind of advice without them being scared by their political masters into doing things which may not be in the public's interest or the national interest.

The Constitution also says that once they complete their tenure, they shall not be eligible for any public office.

It means they must be so independent that they must not have any post-retirement ambitions. They will be apolitical in nature.

Let me finish. The Constitution says the mandate of the UPSC is to conduct examinations for selection of persons for public service, which means that it will conduct the exams from which people will enter different services.

Whether you opt for the Indian Administrative Service, the Indian Police Service or others, it will all be determined through an examination conducted by the UPSC, which is independent in existence. That is the scheme of things.

Today, the UPSC exams are conducted and then based on merit and also by choice different people are awarded different services -- IAS, IFS, customs, income tax etc; both merit and choice are taken into account.

It means if I have acquired the 10th position and I opt for income tax, my choice will be respected, because I scored high on merit.

Similarly, if my rank is 180 and my first choice is IAS, I may not get it because I don't have the merit and people above me who do have already entered.

So, then I will get my second or third choice or I will get through lottery in service.

This is how services are awarded on very transparent, very objective and an independent examination system in which the government has no say.

How are cadres allocated states then?

Every state is given a certain number of vacancies.

Rajasthan has four vacancies -- three from outside the state and one from within the state. That is the formula that is being followed.

This system has worked so well because the character of bureaucracy in any state is very cosmopolitan.

The bureaucracy is a very stabilising force in the country. There is diversity and it has been a great integrating factor for the country.

It is a very well thought out and time-tested system.

How is the government wanting to change this system?

The Government of India now wants to change this system. The UPSC will conduct the examinations and give us a combined list.

For instance, 2,000 people have joined the civil services, then they will go through a foundation course.

The foundation course is an in-service training programme.

When you are in the foundation course, you will be judged based on examination, performance and the marks given by your trainers. You will be awarded a certain number.

In such a scenario, what happens?

So what will happen is the politicisation of the bureaucracy will be complete.

You will have people who are very pliant and do anything for their masters. This will become a complete mess.

But the foundation course is part of the present system too.

Yes, it is and certain marks are given in the foundation course. But those marks don't determine your service and which state you will go to.

They are basically qualifying marks and then after that, you go to the state and then take the examination.

And then you have to pass that exam to be confirmed in the service so that your probation is not extended.

Therefore, the people who go into service today, they can always say we are not servants of political masters, we are the servants of the people.

Can you imagine a time when no bureaucrat will tell a minister this is illegal or legal?

In our country there's a common notion that bureaucrats are parrots of the government of the day.

Now you can imagine that if today you consider them in this manner, what would happen when they actually become that creature (parrot).

Today, you have 30 to 40 per cent of bureaucrats who are not parrots of the government, but what happens if you change the system?

100 per cent bureaucrats will become parrots.

Do you question the government's intent in changing the system?

One doesn't know what the intention is.

It does not say what is the thinking behind this move or what is wrong with the present system.

You have to remember India is a federal country and IAS officers are recruited by the central government and the President appoints them, but they are assigned to state governments.

Most of their lives, they work in states and they are under the control of the state government.

Today you have IAS and IPS officers in Jammu and Kashmir which are working with the state government, who are appointed by President of India.

Why have state governments accepted this system? Because the recruitment does not have any interference from the central government.

But the moment you change the system, the states may very well stand up and say we do not want these people (officers) as it is a federal system.

If implemented, this can disrupt the system, which will have more adverse consequences than demonetisation.

Hasn't the bureaucracy failed the people of India?

This is the easiest thing to say, by blaming the bureaucracy.

It is easy for politicians to say that bureaucrats do not allow them to do things.

What have they stopped politicians from doing?

When the government wants to do something, they do it.

All I am saying is that the people complain about the judiciary, yet today we have a semblance of rule of law because the judiciary is functioning.

What kind of performance do you expect from bureaucrats when you transfer them every six months?

This used to happen in state governments, now it is happening at the central government.

Whenever Prime Minister Modi's performance in office comes up, it is pointed out that it is the bureaucracy, which he inherited from the previous government, that is tripping up his plans. What do you have to say about it?

Tell me, how many senior bureaucrats from the previous government are in the Modi government's administration?

Ninety per cent of them have been appointed by the present government.

A very large number of bureaucrats working right now have worked with the PM in Gujarat (when he was chief minister).

In the last four years, a large number of transfers of secretaries, joint secretaries and additional secretaries have taken place. I don't think that has happened in the last 30 years.

In my 37 years, I have not seen so many joint secretaries being transferred so many times.

Earlier on, joint secretaries and deputy secretaries used to have five years tenure in one department and then they used to develop certain kind of expertise.

Now in six months you see transfers of secretaries, and even within three months they get transferred!

Why are India's babus unprofessional?