'It is the RJD, otherwise known for misgovernance, which has offered a candidate of clean and performing credentials, rather than the NDA,' points out Mohammad Sajjad. 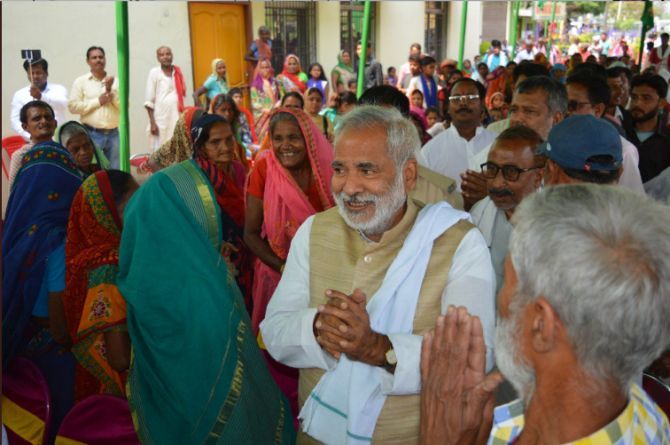 Vaishali is the birthplace of Lord Mahavir, the last and 24th Jain Tirthankara who preached peace and non-violence.

It is also known for giving birth to a certain kind of republican governance when the Lichhavis ruled over it.

It is a site of Buddhist pilgrimage and one of the Buddhist councils was held there.

Later, in the 15th century, a Sufi saint, Sheikh Qazin Shuttari, also spread his message of love and syncretism. Every year a huge crowd of devotees from all communities throngs his mazar.

Ironically then, quite often, this Lok Sabha seat is offered Bahubali type of strongman candidates.

Soon after being elected in 2014, Ramashankar spent almost two years in jail in a case of kidnapping for ransom.

Another formidable' candidate to have contested the 2014 election and who garnered a 'respectable' number of votes, was Bhumihar strongman and transport entrepreneur Munna Shukla's wife Anu Shukla.

This story of electing Bahubali-like nominees began in Vaishali in the 1994 bye-election of Lovely Anand (wife of Rajput strongman of the Kosi belt, Anand Mohan), which was seen as the beginning of the undoing of Lalu Yadav.

Soon after this election, Nitish Kumar broke away from Lalu and formed the Samata Party.

This was also an initial phase of the coming together on the electoral front of two rival upper castes, Bhumihars and Rajputs, against Lalu, then chief minister.

The immediate backdrop for this was a series of gang wars: In 1992, Bhumihar legislator Hemant Shahi was killed, allegedly by ruling Janata Dal men. In 1994, Chhotan Shukla and Butkun Shukla, two brothers, were killed. The funeral procession of Chhotan Shukla in Muzaffarpur, eventually lynched G Krishnaiya, the district magistrate of Gopalganj, Lalu's home district, for which Anand Mohan Singh was convicted.

Subsequently, in June 1998, Brij Bihari, a strongman and symbol of backward caste assertion against upper caste gangsters, was also killed.

Brij Bihari was a minister in the Rabri Devi cabinet; his widow Rama Devi is now in the BJP seeking a third term from the Sheohar Lok Sabha seat which she represented in 2009 and 2014.

In 1998-1999, she had represented the Motihari Lok Sabha seat on an RJD ticket, defeating the BJP's Radha Mohan Singh, Union agriculture minister in Narendra Modi's Cabinet, who is seeking re-election from Motihari.

The latest spine-chilling high profile murder was of a Bhumihar, Samir Kumar, former mayor of Muzaffarpur, in September 2018.

The Lalu-Rabri regime is often described as 'jungle raj'.

Particularly since 2013, when Nitish Kumar broke off from the BJP, Bihar has seen a sudden spurt in crime, lawlessness, and also communal clashes. This has been further accentuated in recent years.

One is not sure if the media and the articulate segments of Bihar really look upon this deterioration with as much disgust and revulsion as they looked upon the Rabri regime. Conversely, not many may disagree that on the issue of lawlessness, an RJD-led administration in Bihar faces greater ire than a regime aligned with the BJP.

For many upper castes, the RJD symbolises lawlessness whereas the NDA is not perceived so. This duplicity stands further exposed when one looks at the recent history of Lok Sabha elections in Vaishali where this time, the RJD's Raghuvansh Prasad Singh is pitted against the LJP's Veena Devi. Both are Rajputs.

Raghuvansh Prasad, known for his simple, unassuming and frugal lifestyle (and hence nicknamed Brahma Baba), has had a long political career of almost half a century. He has lost only a few elections in his life.

His performance as Union rural development minister received much admiration from a cross-section of society. He does not carry allegations of corruption nor does he have any criminal antecedents.

Raghuvansh Prasad is thus the development face of the RJD, which is infamous for having neglected development. Even though it is an irony of historic proportions that despite being historic, and full of tourism potential in a resource-starved Bihar, the historic village of Vaishali is yet to be put on the railway map. This, despite the fact that quite a few Bihari parliamentarians have been rail mantris.

The only criticism Raghuvansh Prasad faces from the electorate in Vaishali that he extends favours to his caste-men, fellow Rajputs, especially true in awarding contracts for civil construction, something about which the RJD's core base, the Yadavs, have complained to Patna.

Another criticism he faces in his home turf is that in many assembly segments, he rarely visits any Muslim village though they have been his most consistent voters except in 2014, when almost every third Muslim voted for their community candidates contesting as Independents (a total of 46,000 votes were thus taken away by these candidates).

Besides, some Muslims also voted for the other Independent (Anu Shukla), for the JD-U, and also for the LJP.

This is how local political workers, insiders and other election-watchers of Vaishali see it. It is said that many Yadavs who expressed their anger against Raghuvansh Prasad's act of favouring Rajputs, went on to join the Modi bandwagon in 2014.

He did not forge any alliance with Bhumihars in terms of having at least one Bhumihar MLA from the Congress-RJD from any of the assembly seats in Vaishali.

Raghuvansh Prasad is also alleged to have not let the Muslim leadership grow in its assembly segment of Kanti, which twice elected Muslim legislators, and that he pits one Pasmanda caste candidate against another.

Also, there were some incidents of communal tension and violence in which he did not intervene to calm down the situation, which the people hold against him.

Yet, local observers, election-watchers and political workers in Vaishali seem to suggest that the Yadavs, Muslims and many poor low castes have come back to Raghuvansh Prasad.

Conversations with people from the Kushwaha, Mallah, and Musahar communities don't reveal much about their probable electoral preferences. The RJD's alliance with smaller outfits representing the above three castes does not make it much clear if these votes would really be transferred to the RJD-led coalition.

The Kurmis and Ati Pichdas are supposed to be with the NDA. But the bigger fact is the Ati Pichdas (Pachpaniyas, or 55 castes) are mostly silent, possibly because no single caste from this category has populous villages dominated by their people.

They are mostly scattered, and at the time of elections, generally avoid being seen as an electorally aggregated and vocal group.

So what about the upper castes?

Not without any reason, the US-based anthropologist, Witsoe Jeffrey, working on rural Bihar, calls these brokers 'frontline functionaries of the State'. Their counterparts in West Bengal are called mastans, where they are integrated into, and patronised by, the ruling party.

On Nitish Kumar's watch, in today's rural Bihar, these elements have fattened themselves on bootlegging, in connivance with the local police and lawmakers. These bootleggers are said to be the providers of money to the political parties.

Sections of the Bhumihars, in private conversation, confide that electing Veena Devi would adversely affect their dominance in the area. Bhumihars have long not been elected either from the Muzaffarpur Lok Sabha seat (where both the alliances have fielded Mallah candidates), or from Vaishali.

Muzaffarpur is supposed to be the cultural capital of Bhumihars. At the same time, most of them also have almost undiminishing love for Modi.

Though a small section of Bhumihars has joined Raghuvansh Prasad's campaign team, they argue that notwithstanding their longstanding grievances against the RJD's politics of marginalising Bhumihars, of the two Rajput candidates they would prefer someone with a clean image, a highly educated gentleman -- Raghuvansh Prasad.

While this caste calculus will reveal its layers only on May 23 when the votes are counted, in Vaishali, it is the RJD, otherwise known for misgovernance, which has offered a candidate of clean and performing credentials, rather than the NDA.

Notwithstanding Raghuvansh Prasad's limitations, in this jaded era of money-muscle politics, that a simple gentleman like him can survive and even thrive is indeed quite a feat. 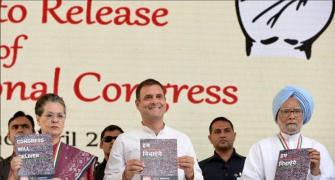 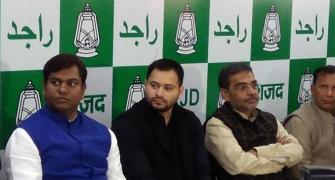 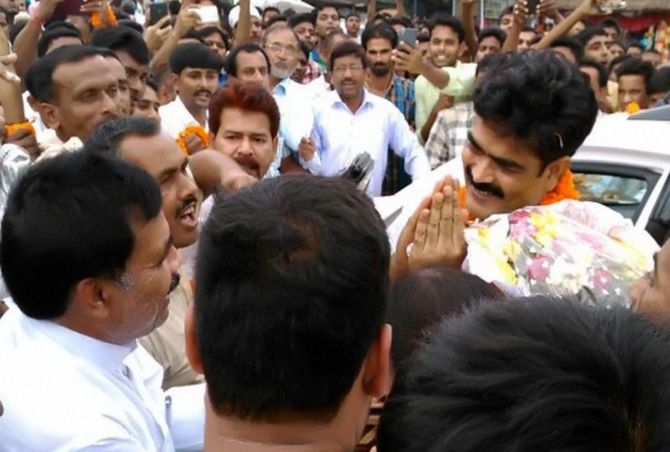 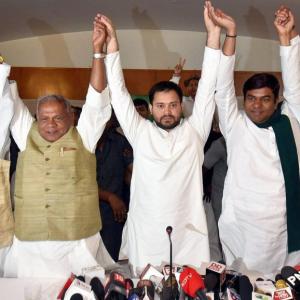